J.J. Abrams's film isn't as daring or artful as The Last Jedi, but it knits the patchwork mythology of the decades-spanning space opera into a coherent whole 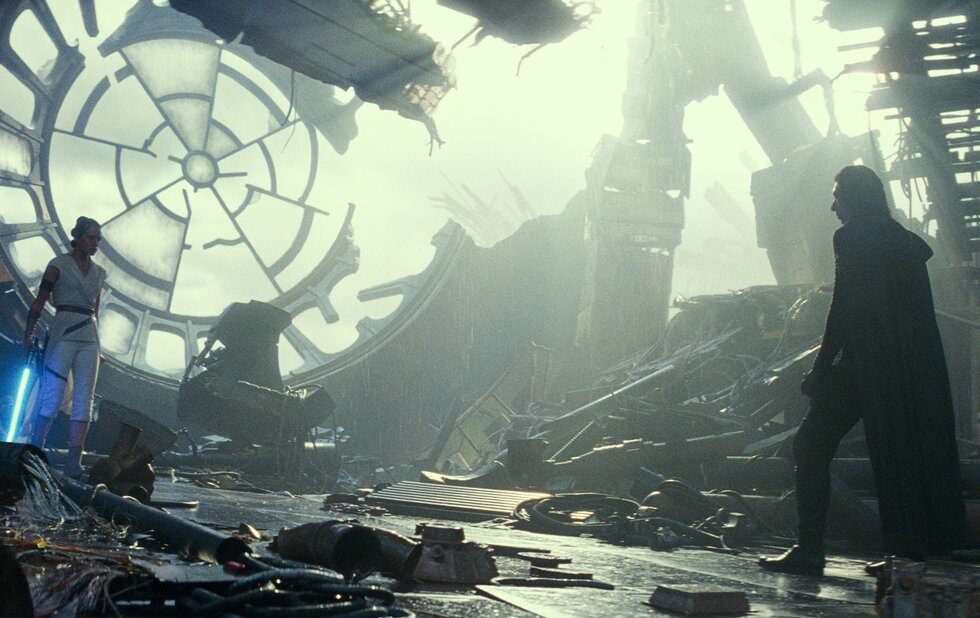 Star Wars: The Rise Of Skywalker has a lot to deal with.

Not only does J.J. Abrams have to knit the patchwork mythology of George Lucas’s decades-spanning space opera into a coherent whole with a suitably epic conclusion, but he has to reckon with the fact that Rian Johnson’s The Last Jedi raised the bar considerably for artistry, complexity and storytelling.

If Abrams brought Star Wars back to life in 2015 with The Force Awakens – and he did, remixing Lucas’s first film into a fleet, engaging adventure for some engaging new characters – it was Johnson who took the time to think about the movies that followed, riffing on elements from The Empire Strikes Back and Return Of The Jedi to come out the other side in a place the franchise had never been before.

And now Abrams is back at the tiller, replacing Jurassic World’s Colin Trevorrow, and going right back to the old stuff.

If The Force Awakens used the original Star Wars as its blueprint, The Rise Of Skywalker takes Return Of The Jedi as its inspiration, once again setting up a final stand for the rebellious Resistance against the imperial designs of the First Order while a nascent Jedi confronts the forces of darkness one-on-one.

Battles will be fought. Lines will be drawn. Old enemies will resurface, and new friends will be made.

I always hesitate to dig into the plot of these movies, because the marketing has taken care of that, but it’s fair to say that the film’s final movement re-stages the same stakes that were in play at the climax of Return Of The Jedi – only now, everything’s scaled up to IMAX proportions, benefitting from 36 years of technological advances.

And in spite of that, I’m still delighted by how faithful these movies are to the look of the original trilogy, from the visible film grain in the image to the shag haircuts on half the background players. It may be nearly 2020 out here, but it’s still 1977 in there, and it’s lovely.

Also lovely are the little moments that the actors carve out in the midst of all the running and shooting and fighting. Daisy Ridley, Oscar Isaac and John Boyega all do fine work showing us how these characters have grown into themselves, and what it’s cost them.

And while the film’s focus is necessarily on Ridley’s Rey, who once again finds herself resisting Kylo Ren’s (Adam Driver) attempts to turn her to the dark side of the Force, Boyega gets some standout scenes this time around, building on the hero complex Finn has demonstrated ever since he first tried to save Rey on Jakku. He’s willing to sacrifice himself at a moment’s notice, but it’s not a death wish: it’s the need of a man who was raised as a henchman to prove he’s actually one of the good guys.

As for Kylo Ren, well, even as the Supreme Leader of the First Order, he’s still a toxic ball of rage. The Last Jedi had him abandon his dark helmet as a sign of his new confidence – and an acknowledgment of the incredible resource that is Adam Driver’s face – but it’s repaired and restored within minutes of The Rise Of Skywalker’s opening, a sign that Abrams is rolling back some of Johnson’s most daring changes.

But while there is some retconning here, it doesn’t feel like a panicked mashing of some reset button to please that subset of fans who felt betrayed by The Last Jedi for good or ill, I got the sense that Abrams was doing it to untangle a complicated narrative, much the same way Lucas did with Alec Guinness’s speech in Return Of The Jedi about certain points of view.

Somewhere in there, Abrams even explains the thing that’s going on between Rey and Ren, Force-wise, that feels entirely appropriate to a franchise about generations of people who seem doomed to endure the same events over and over again. It made sense in the moment, and it sets up an ending for the entire story that feels both earned and faithful.

And then there’s Carrie Fisher. General Leia was supposed to be a major part of this film, like Luke Skywalker in The Last Jedi and Han Solo in The Force Awakens before him.

Fisher died in December of 2016, before a frame of this movie could be shot, and it’s some kind of miracle that Leia is as present and alive in The Rise Of Skywalker as she is. Resurrected through a combination of body doubles, retooled Fisher footage and CGI, Leia appears through a lot more of this movie than I expected, often with her real-life daughter Billie Lourd nearby as a sort of approval.

It could have played as sacrilege, or weaponized nostalgia, but it doesn’t – somehow it’s okay, a fond echo of an old friend long gone. In a way, that’s what Abrams has done with the franchise itself, re-creating something we thought lost in a flurry of digital noise and wonky obsessions. It’s not as daring as The Last Jedi, and that’s a little disappointing, but neither is it as floundering and patchy as last year’s Solo.