While their famous friends in Arcade Fire have changed with the times, this band's sound is preserved in indie rock granite – but the cultural tide has flowed back in their direction 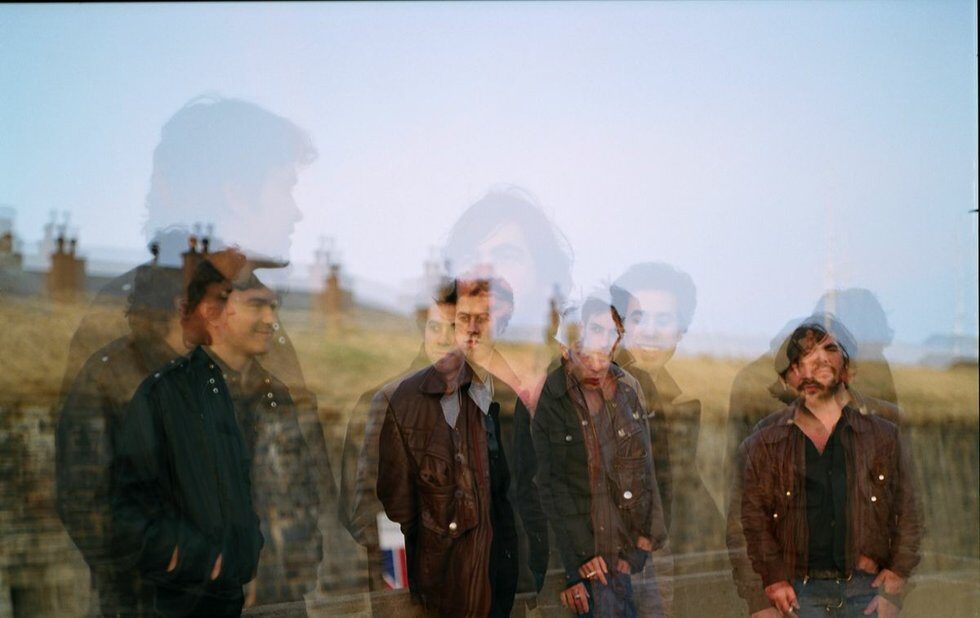 It’s now been 15 years since Montreal-via-BC crew Wolf Parade stormed the indie rock A-list with their swashbuckling debut, Apologies To The Queen Mary. But given all the personnel changes, side projects, extended breaks and sea changes in the zeitgest that have occurred since then, it feels more like 50. And yet, like the stopped clock that tells the correct time twice a day, Wolf Parade are proof that if you hold your ground long enough, the cultural tide starts to surge back in your direction.

While their more famous friends in Arcade Fire have taken an adapt-or-die approach to survival, forsaking ramshackle orchestral rock for sleek electro-disco, Wolf Parade’s discography charts the ongoing process of reconciling the inherent tension between the ravaged, working-class grit of guitarist Dan Boeckner and the fanciful glam flourishes of keyboardist Spencer Krug. That’s kept their sound preserved in indie rock granite. But when you consider the still-topical concerns of that first record – a disillusionment with the modern world and the soul-crushing, clock-punching labour that drives the capitalist machine – and the fact we are once again at the mercy of a trigger-happy ignoramus in the White House, the return of Wolf Parade in 2020 couldn’t be better timed.

Thin Mind is the band’s second album since returning to active duty in 2016 after a half-decade hiatus, but it feels less like an extension of their tentative comeback effort, Cry Cry Cry, than a spiritual sequel to Radiant Dawn, the dystopian quasi-concept album released last year by Boeckner’s synth-rock outfit Operators. Not only does Thin Mind tap into similar themes (namely, the brain-deadening effects of our totally wired world and the looming environmental disasters that will soon put us all out of our misery), it mainlines Operators’ nervy new wave energy and rhythmic precision.

With second guitarist Dante DeCaro jumping ship last year, Thin Mind marks a return to Wolf Parade’s original three-piece lineup of Boeckner, Krug and drummer Arlen Thompson – and the group have downsized their sound accordingly, largely excising the displays of proggy sprawl that have always been a feature of their records in favour of a more immediate, pop-focused attack. If Cry Cry Cry had the feel of a band shaking off the cobwebs and getting used to each other’s company once again, Thin Mind leaves no doubt about Wolf Parade’s continued vitality.

You instantly feel that renewed vigour in the storming first seconds of the opening Under Glass, which reasserts Boeckner’s uncanny ability to channel sad-eyed defeatism into life-affirming anthems. The motorik synth-pop of Forest Green is even more urgent and exhilarating, like an early-80s Cars hit recast as a fiery protest song decrying the conversion of woodlands into condos on “stolen land.”

Rather than serve as the eccentric antidote to Boeckner’s brutal truths, Krug tunes into the same wiry wavelength. His songs may initially seem more intimately scaled than Boeckner’s worldly addresses, but yield equally unsettling observations about humanity. The discofied Julia Take Your Man Home is an unflattering portrait of masculinity, as embodied by a drunk asshole boyfriend “sitting at a bar carving shapes that look like dicks into the wood.” Town Square, meanwhile, rides a giddy New Pornographers-style groove to lament the death of true romance in a smartphone-addicted age where “all we are is reaching for the light,” before unleashing its frustrations in a thrilling noise breakdown that transports The Who’s Won’t Get Fooled Again to side four of Sonic Youth’s Daydream Nation.

In issuing their grave diagnosis of our current condition, Wolf Parade have only become more resolute in inspiring us to overcome it. Boeckner’s chugging rocker Wandering Son may sing of automation rendering your job obsolete, but the loopy organ-riff echo of the 2005 classic This Heart’s On Fire is there to stoke a fighting proletariat spirit that can never be extinguished.