On their fifth album, Arcade Fire wage war on everything

An ironic, irreverent tone renders some songs frivolous, but Everything Now comes in for a smooth landing by the end 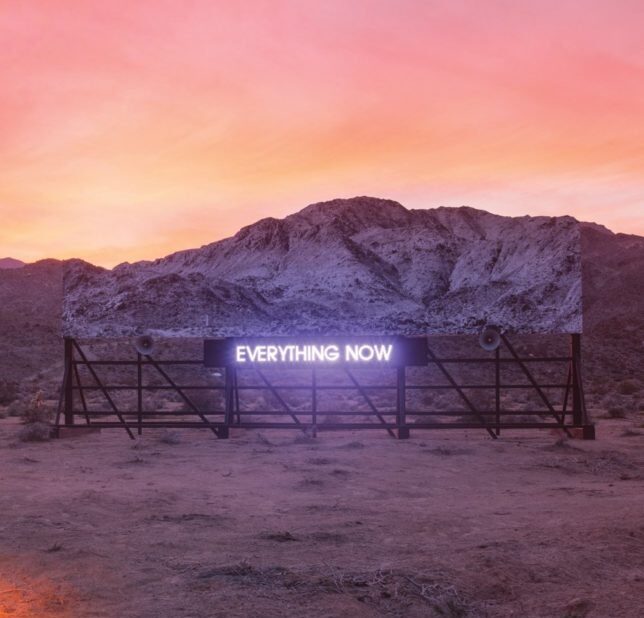 The first three Arcade Fire albums amounted to a war on boredom: a throat-shredding, orchestro-rock affront to the various afflictions – apathy, religion, suburban life – that suppress our will to live. With 2013’s disco detour, Reflektor, the band waged war on amusement, breaking our addiction to URLs with an invitation to dance IRL. But for their fifth record, they set their crosshairs on a more nebulous target: everything, or rather our need to have it all – money, music, sex, fame – all of the time.

On the surface, Everything Now is a reflection of Reflektor, exhibiting a similar early-80s fusion of disco, reggae, punk and synth-pop. (James Murphy may have vacated the producer seat, but the band amassed a dream team of studio savants – including Daft Punk’s Thomas Bangalter, Pulp’s Steve Mackey and Portishead’s Geoff Barrow – more than capable of showing them the way back to the dance floor.) And as the title track proves, Arcade Fire have become evermore adept at couching their cultural critiques in alluring glitter-ball grooves, with the song’s deceptively celebratory chorus doubling as a scathing indictment of a society that encourages overconsumption yet leaves us feeling empty.

But the megaphone-blown intensity that fuelled the band’s greatest underdog anthems is more diffuse here, diluted by an ironic, irreverent tone that renders some songs frivolous. The illicit-affair invite Chemistry is an ill-fitting mash-up of cheery rocksteady and fist-pumping glam-metal. Infinite Content is one half-decent pun (“infinite content / we’re infinitely content”) stretched over two songs – the first, a punked-up surge, the second, a weepy cowpoke ballad – that feel more like throwaway B-side gags than the album centerpieces they’re positioned as. And then there’s Creature Comfort, which effectively updates the Talking Heads’ Once In A Lifetime from mid-life-crisis koan to a strobe-lit treatise on millennial malaise, but finds Win Butler recounting the details of a young woman’s suicide attempt with a discomfiting nudge and wink: “She told me she came so close / Filled up the bathtub, and put on our first record!”

The Arcade Fire of 2017 may hew toward more “fun!” than Funeral, but the best songs here ultimately tap into that album’s eternal themes of love, family and forgiveness. Electric Blue is a starry-eyed, synth-bounced reverie that finds Régine Chassagne getting over a faded summer fling by getting down like Mariah Carey in the Tom Tom Club. And despite its turbulent fluctuations in quality, the album comes in for a smooth landing with Put Your Money On Me and We Don’t Deserve Love, a pair of unflinching, affecting rocky-romance portraits worthy of an old country record but slathered in a futurist, neon-tinted sheen and guest Daniel Lanois’s mercurial pedal steel.

For an album that otherwise condemns the materialism and narcissism of the modern world, Everything Now works best when it practises what it preaches: block out the superfluous noise for direct appeals to the heart.

Top track: Put Your Money On Me

Arcade Fire This week in NOW