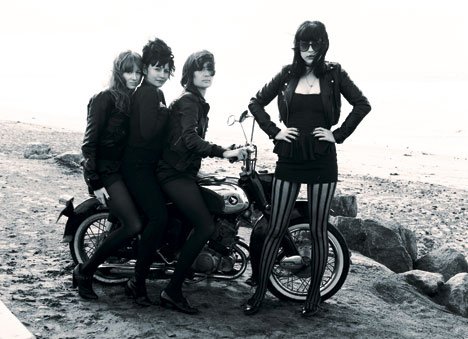 Crappy cellphone reception on an American highway makes Dum Dum Girls leader Dee Dee (aka Kristin Gundred) sound like she’s talking through a distorted megaphone from across a football field.

Though annoying, it’s an appropriate metaphor for Dum Dum Girls. The four-piece all-girl band crafts perfect little major-key 60s girl group songs with rich harmonies, and then buries it all under a wall of fuzz and cavernous reverb.

That veil of lo-fi noise is starting to lift on their impressive new debut album, I Will Be (Sub Pop). And while they may end up losing a bit of punk cred by cleaning things up, Gundred isn’t too worried about that. You don’t bring in someone like Richard Gottehrer to produce if you’re looking to stay in the garage.

Gottehrer, best known for his role in writing My Boyfriend’s Back and I Want Candy in the 60s, later went on to produce debut albums by Blondie and the Go-Go’s and to co-found Sire Records.

“His name got tossed out almost as a joke, but then we saw that he’d been producing the Raveonettes, and that was kind of like the green light,” she says, speaking softly and choosing her words carefully. “I think Sub Pop just cold-called him. Something sparked his interest, so we didn’t really need to go down the list and approach anyone else.”

It’s a perfect fit, as few other people are in such a good position to connect 60s pop influences with early punk fury. Gundred once said she wanted the Dum Dum Girls to come across like the band that the girls who hung out with the Ramones might have had, and that’s as good a way as any to sum them up.

Gottehrer is definitely an impressive name to have on board, especially considering that Gundred hadn’t even assembled her band at the time. In fact, their first real live show was in late October at CMJ, and they got signed to Sub Pop the very next day.

“That’s how it looks on a timeline, but it was something that was already being discussed for quite a while. I was already mixing the record by the time we played that first show. For me, the experience was even crazier than it sounds on paper, because there was this huge label that wanted to sign me and I hadn’t even played a single show yet.”

By making her name first as a solo artist pretending to be a band, Gundred has been able to maintain control over the process, and that’s very important to her. She has no interest in being part of the tradition of all-girl outfits manipulated by some Svengali male producer, as Kim Fowley did for the Runaways.

“It wasn’t really the traditional artist/producer relationship. Basically, I gave Richard the raw materials, and he did as much as he could with that.

“I had a very particular sound based on my methods, and there was no way of jumping into the studio and duplicating what I’d been doing in my house. So the compromise was that I recorded it myself and looked to someone else to mix it.”

Gottehrer brought a sense of depth and dynamics to the mixes that Gundred’s early EPs were missing. On I Will Be, you can finally hear the individual layers of vocals and instruments, except that the instruments aren’t quite what you think you’re hearing.

“It’s a little-known secret, but the entire record is played on the acoustic guitar I’ve had since I was a kid. Everything was amplified and distorted after the fact, but every stringed instrument on the record is that guitar – even the bass. That’s one of the reasons I wanted to record at home, because I knew there was no way it would sound the same if I went into a studio. It’s a sound I stumbled on because I didn’t know what I was doing, and I became very attached to it.”

As much as I Will Be feels like a giant step forward for the band, I’m convinced after catching them live a few times at SXSW that this is only the beginning. All the latent pop magic that’s alluded to in the recordings comes to the forefront live, and the big harmonies put the Dum Dum Girls miles ahead of the legions of other hip bands mining the buzz-saw/bubble-gum trend. (Having a few choir nerds in the band also helps.) Surprisingly, despite the fact that their sound works so well onstage, Gundred was initially happy to stick to the studio.

“It was just supposed to be a recording project, but as time went on I started thinking that since I was finally happy and enjoying myself creatively, and I have this crazy opportunity with Sub Pop, it was now or never. I spent my 20s pretty much failing at music. It’s not that I feel like this is my last chance, but it does feel like the best chance I’ve ever had.”

Technically, Dum Dum Girls had played a few gigs before, but with makeshift lineups, nothing like what Gundred had in her head. If she was going to take these songs to the stage, she knew it had to be an all-girl band, and not just to reproduce the three-part harmonies.

“I’ve had musician heroes my whole life, but for some reason I didn’t connect that I could be doing it, too. The first few bands I was in, I was kind of the token girl and didn’t really have a ton of say about what was going on.

“I love girl groups, but they always had the air that they were put together by a male producer who wrote all the songs. We’re about owning what we’re doing 100 per cent.

“I’d had such bad experiences in the past with bands. I got pretty burnt on the whole concept of having to go along with other people. When I started recording this stuff, I was reacting to having to subject myself to other people’s influences, so I really enjoyed having complete creative control and not having to deal with anyone else’s ego.”

Gundred loves that fans have started taking their young daughters to the gigs, in some cases teaching them how to play the songs. Obviously, she believes in the importance of female role models in music, so I wasn’t sure if she was joking when she was quoted as saying she hoped Dum Dum Girls’ success would help her meet Lady Gaga.

“I’m actually pretty sure I didn’t say that,” she laughs. “However, I do think her role in pop culture is pretty necessary. To have someone who’s an outspoken bisexual and a very politically charged pop star who has so many number-one singles – it just blows my mind.

“Without even getting into what I think of her music, I was pretty impressed when she performed at a marriage equality event and covered Imagine by John Lennon and then had the balls to change the lyrics. How brave is that? I’d love to give her a high-five.”