Why are Whitehorse singing about sexual politics? 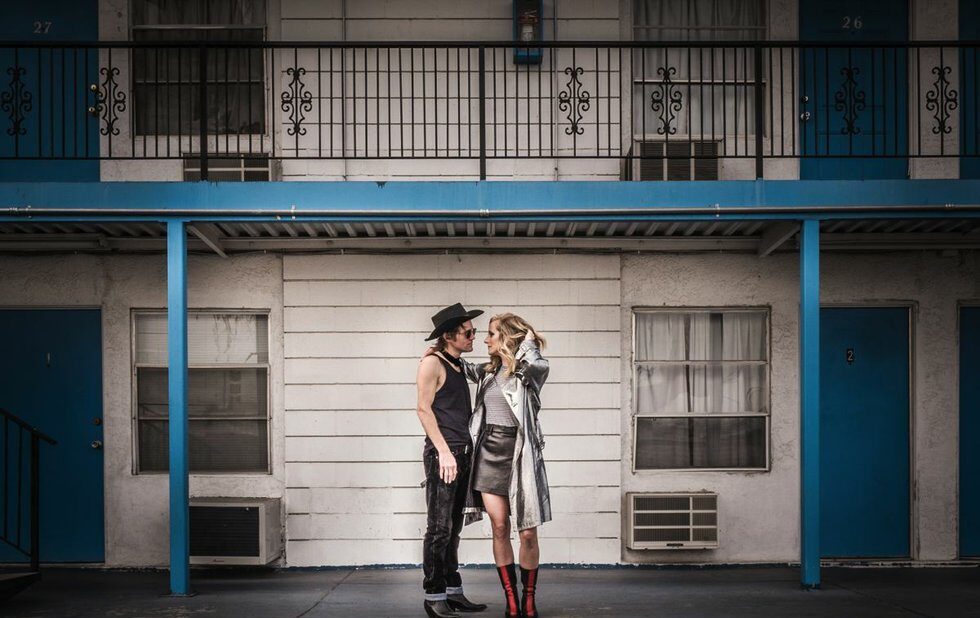 When you think of activists fighting back against dangerous and archaic sex work laws, Melissa McClelland and Luke Doucet aren’t the first people to come to mind.

Bedford’s battle inspired the song Evangelina from Whitehorse’s 2015 album Leave No Bridge Unburned, and on Panther In The Dollhouse she inspires its sequel, Nighthawks.

“Evangelina is like a super-hero prostitute, really trying to take down the shame around sex work and present it as a noble profession,” says McClelland over cold brew coffees in the pair’s Junction Triangle neighbourhood.

“Nighthawks delves into the seedier, darker corners of that industry and explores problems that arise from pushing that work underground – the victim/perpetrator kind of existence that rises up from it.”

These questions still linger with the 2014 passing of Bill C-36, which, while purporting to protect sex workers, further criminalizes their profession, subjects them to increased policing and exposes them to the dangers of the black market.

“It just feels so outdated and archaic, this leftover puritanical bullshit we’ve heaped on it,” says McClelland.

Other new songs like Trophy Wife and Boys Like You explore the dynamics of shame and conservatism around romantic and sexual relationships between consenting adults.

But the question remains: why Whitehorse?

“We’re pretty vanilla in the way we approach our lives,” admits Doucet, pausing to move out of the way of a passing stroller, “or at least as far as people can tell by looking at us. If we were obvious sexual minorities, maybe our curiosity around sexual politics, sexual propriety, morality and norms would be more expected.”

“With someone like Terri-Jean Bedford, it’s easy to see how she has a horse in this race,” he continues, noting that his mother was an outreach nurse who worked directly with sex workers in Winnipeg when he was growing up.

“The average person walking down the street can easily just say, ‘I don’t need to be involved. It doesn’t affect me.’ But I think in order for destigmatization to really be effective, maybe [involvement] has to happen among the – scare quotes – ‘normal people.’”

Centring an album around issues of consent and sexual politics might seem like bandwagoning for a duo who has never outwardly presented themselves as a big-P Political band. But they’re careful not to come off as preachy or moralizing. They consider themselves storytellers first. It just so happens the stories they’re writing and characters they’re creating reflect their political leanings.

Panther In The Dollhouse expands their formerly sparse palette with elements of trip-hop production and vintage Beck genre-jumping. But their tense sexual dynamic, especially on display in concert, remains front and centre alongside their unassailable grooves. After all, the early rock-blues tradition they draw from has always dealt with themes of love and sex – the difference is McClelland and Doucet are willing to deconstruct the attitudes behind them.

“I think the intrinsic nature of rock and roll is sexiness,” argues McClelland. “There’s sex in it. And we are collectively talking about sex in different ways, which makes the characters more complex.”

That makes their songs thematically simpatico with Savage, whose syndicated column (which appears weekly in NOW) and podcast have popularized more flexible attitudes toward monogamy, gender dynamics and the sexual status quo. He’s been a big influence on them.

“I don’t think that’s necessarily a coincidence,” says Doucet, about theirs and Savage’s areas of interest lining up. “Not to get religious about it, because if you knew me you’d know how ridiculous that would be, but when it comes to how we think about things philosophically and socio-politically, Dan is kind of a quasi-spiritual guru.”

McClelland agrees. “This might be the most star-struck I will ever be,” she says.