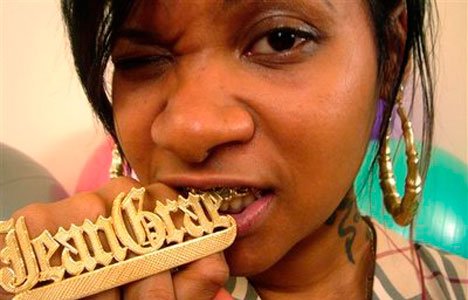 You know rap is outta control when:

Jean Grae is slanging verses of rap to randoms on Craigslist!

First off, you may be pondering: who is Jean Grae? And no, we don’t exactly mean a lyric-spitting Famke Janssen, the is-she-dead-or-not? co-star of Hugh “Wolverine” Jackman in X-Men franchise. We mean the hip hop version of Jean Grae, the South African born/New York City bred poetess named Tsidi Ibrahim.

Her tumultuous time in the music industry officially began in the halcyon days of the Bobbito-inspired Fondle ‘Em Records, circa 1996-ish, where Jean Grae (previously known as the MC named What? What? and secretly known as the producer Run Run Shaw) was part of a group called Natural Resource, and dropped a funny little number called Bum Deal .

Fast forward a few years, a few side-projects, a critically-acclaimed Babygrande release called Last Week, and a heavily-bootlegged, myth-making collaboration project with former Little Brother beatmaker 9th Wonder called Jeanius, and you’ll find a Jean Grae teetering on the edge of retirement and implosion. (We thought it was all over for her after this one, but alas, no.)

So now, in 2008, instead of releasing her long-awaited Warner Bros. distributed Blacksmith Records debut, Jean Grae finds herself peddling dope raps on Craigslist, and trying to subvert yet another wave of bootlegging her incendiary material. They just don’t make rappers like they used to, and now, Jean’s skin-crawlingly sharp lyricism reveals her to be an even more rare diamond in the rough, rugged and raw poetry culture that is rap music.

It looks like if I want to hear some more new music from arguably the best female MC in hip hop right now, it might cost me $800.

Sure, on her Myspace, it says: “I don’t wanna complain anymore, I just wanna change some things about the way artists are treated and the way you guys are allowed to be involved, since it IS the digital age.”