Ahead of the Tragically Hip’s three sold-out shows at the Air Canada Centre this week, Mayor John Tory has gone ahead and named August 10 as “The Tragically Hip Day” in Toronto.

In the official proclamation, which we’ve posted in full below, Tory states, “Although The Hip will be playing their last Toronto shows, their iconic music will continue to make its mark on Toronto’s musical and cultural scene.”

For those lucky enough to attend the shows on August 10, 12 and 14, Tory also mentions a tribute booth outside the ACC’s Gate 6, where fans can record 30-second video messages of their favourite Hip story.

And, whether or not you have tickets, be sure to stop by the fan fundraiser for the Gord Downie Fund for Brain Cancer Research taking place at the Firkin on Harbour before each concert.

While Tory calls this week’s Hip concerts “their last Toronto shows,” one Toronto city councillor is hoping that local fans will be able to experience the band once more together in late August – at least on screen. Mike Layton wants the band’s Kingston concert, which will be broadcasted by CBC, shared in a large public space like Nathan Phillips Square, Yonge-Dundas Square, David Pecaut Square or Mel Lastman Squre.

“I don’t know about you, but Hip songs have been the soundtrack to a good portion of my life,” Layton said in a July interview with NOW. “There will be those who want to celebrate it in solitude in front of their TVs but I think others will want to celebrate this together.”

Layton’s comments on the Hip’s final tour also stand in contrast to Tory’s. The mayor doesn’t mention Downie, who was diagnosed with terminal brain cancer, in his announcement. However, for Layton, whose father, Jack, died of cancer, the news hits close to home.

“I think it’s so special that in a time when he’s going through such a personal struggle – and I know there’s a family struggle going on there, too, right – for him to be so dedicated to his music and fans to go ahead and say I’m going on tour.” 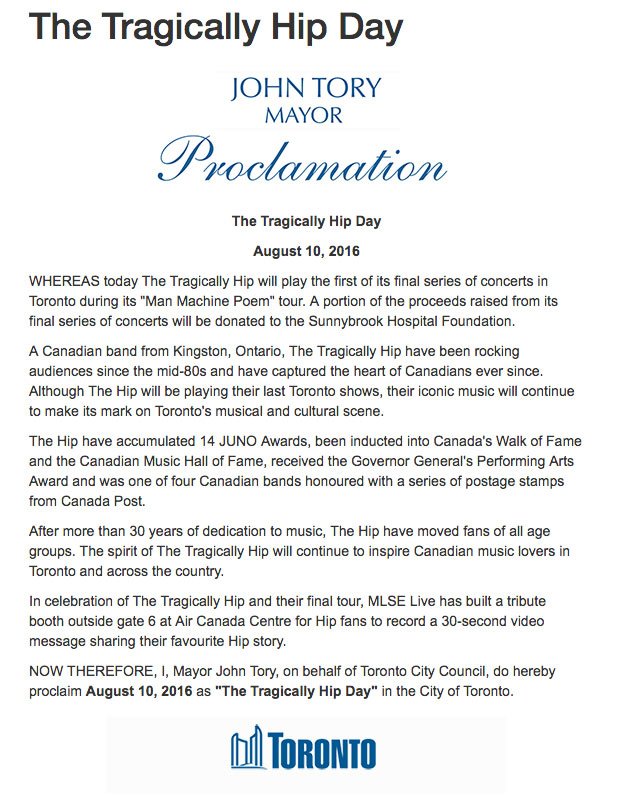