The Hoa Hoas wow us 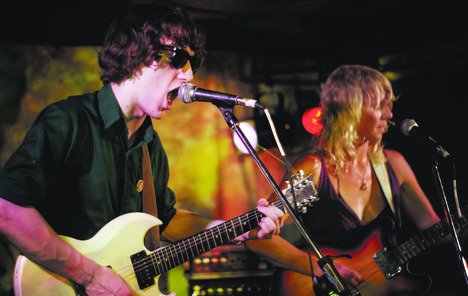 Toronto’s Hoa Hoa’s (pronounced “wah wahs”) have churned out colourful psychedelic soundscapes for about five years now, but they draw their creative inspiration primarily from decades past – namely the psychedelic 60s and the shoegazer 90s.

Richard Gibson, Calvin Brown, Femke Berkhout and Lee Brochu have updated their genre-tweaking sound on their sophomore album, Pop/Drone/Pedals (Optical Sounds). Compared to their 2007 debut, Sonic Bloom, there are more garage-rock sounds and, yes, liberal use of guitar pedals.

“The album’s pretty varied,” says guitarist/bassist/vocalist/keyboardist Gibson, from his Toronto home. “We were going for 60s pop music but with more modern toys to play with.”

As part of the Optical Sounds crew, a local label that includes Gibson’s brother Robert, the Hoa Hoa’s have had a chance to build their sound with like-minded bands like the Disraelis.

“We feed off each other,” says Gibson. “There’s definitely no competitiveness.”

And the band promises to give audience members a tightly executed, memorable live show.

“Typically, our shows are loud and driving,” Gibson says with a laugh. “We prefer to have cool lighting and psych-out movies playing in the background.

How did you get lined up with Optical Sounds?

What are your plans following the release party?