Will the real Andrew WK please stand up?

A thorough examining of the Andrew WK identity controversy

Over the past few weeks some of us at the office have been debating about Andrew WK.

Usually when music critics argue, it’s about whether or not an artist’s work is any good, but in this case, the question is whether or not Andrew WK is a real person, and if he’s not, does that ruin the appeal of his music (or make it better)? Frankly, it’s giving us the kind of headache we got when we tried to wrap our brains around the last season of Lost, and similarly, we’re too fascinated to stop thinking about it.

For most of his career, the party-loving rocker has been dogged with bizarre conspiracy theories about his identity and origins, but until recently it was pretty much the domain of hardcore fans and the tin-foil-hat crew (who are often the same people). The ongoing debate and controversy got bumped back onto the radar recently due to the release of a video where Andrew WK may (or may not) have admitted to being an actor hired by a group of people to portray the role of Andrew WK, and that he is not the original person who portrayed this character. Not since the rumours of Paul McCartney’s death have there been such bizarre questions about a musician’s true identity.

Depending on how you interpret his words, he may be simply be saying that he’s grown as an artist since his early days of party rock fame, and that his character in those early days was created by a group of people (who, according to some, might include Dave Grohl), some of whom do not want to be named, and who are be part of an ongoing legal dispute over the rights to the original character of AWK. Or, if you take him completely literally, he auditioned for a role created by the music industry, and that he took over the role from a previous actor.

We thought we might be able to clear up the mystery by asking Damian Abraham of Toronto hardcore band Fucked Up what his impression of the man is, since AWK collaborated with the band both on stage and in the studio. Unfortunately, he couldn’t shed much light on the subject.

“I honestly have no clue whether or not this is true. I mean that I have my doubts [that he’s an elaborate hoax] but I’m willing to suspend disbelief for the sake of Rock and Roll. I will say this though – if it is true, these people have created the most endearing character since Mickey Mouse. Andrew WK is by far the one of the nicest people I have had the chance to meet through music.”

Well, that may not have helped answer any of the big questions, but it does bring up what’s so fascinating about the controversy. 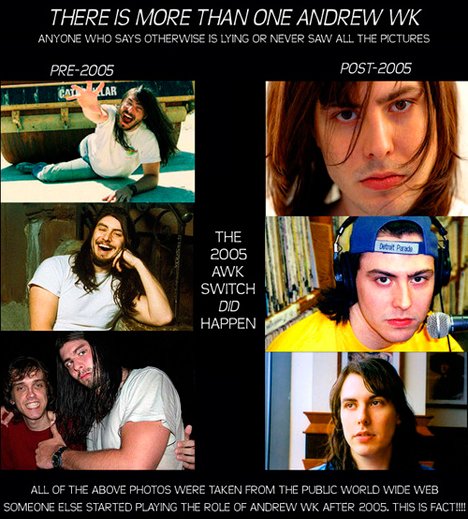 Once you start sifting through the fan reactions, an intriguing split emerges. On one side, some people are clearly upset that they may have been victims of an elaborate hoax, and feel it ruins their experience of his joyful party-hard albums. On the other side, some of us see this controversy as enriching the experience by adding layers of meaning and commentary about fame, identity and the audience/performer relationship. Think of it as an extended performance art piece, and it seems less like a big lie, and more like a complex statement.

The whole thing seems to go back to 2004, when someone claiming to be Steev Mike (the executive producer of 2001’s I Get Wet) started hacking AWK’s websites and claiming that he was a fraud. This also coincided with a legal dispute that prevented AWK from using releasing records under the Andrew WK name in the USA, which added fuel to the increasingly absurd fire.

From what we can decipher from AWK’s statements on the matter, Steev Mike was at one point a pseudonym for AWK, and then was used on his first album as an alias for a team of people. That team included Andrew WK the person, his father, and at least one other person who wanted to remain unnamed (and who presumably is responsible for the legal troubles).

Andrew WK has since repeatedly denied that he is not the original, but some of those denials raise as many questions as they answer. However, when you go back a year or so, it starts to look like the hoax itself is the hoax. Meaning, he was amused by the rumours of his fakeness, and decided to perpetuate them.

This past Tuesday, MTV Canada aired an interview with the eccentric rocker/motivational speaker/classical pianist/noise musician by Johnny Hockin, which predictably enough, raised as many questions as it answered.

“He sort of skirted the issue, but admitted to some weird and dubious things,” Hockin says of the interview. Importantly, AWK does finally admit that Steev Mike (or at least the Steev Mike who produced I Get Wet) is a compendium of people. This, combined with his previous statements, suggests that we’re on the right track in thinking that it is a disgruntled former member of this team who’s been making things complicated for AWK.

Except that there’s also a viable theory floating around that it was AWK himself who was hacking his own websites and propagating the hoax conspiracy as part of the larger plan, which might have something to do with challenging our ideas about heroes (through the medium of a constructed pop star). This isn’t as unlikely as it first seems, especially when you read the liner notes [PDF] to his Who Knows DVD, written by his dad (a law professor who’s long been acknowledged as an integral part of the Andrew WK story).

It’s looking more and more like this is all part of an idea from at least 10 years ago, that is only now starting to come to light, and that this long delay is part of the plan. Whatever the truth is, there are many indications that we’ll find out very soon. AWK is planning on hosting a no-holds-barred Q&A at the club he owns on February 23, which also coincides with the American release of his “lost” 3rd album Close Calls With Brick Walls, the record that was blocked by the mystery disgruntled ex-member of team Steev Mike.

However, as AWK told British magazine Front last year, “Most of what you’ve heard is exaggerated but the parts that are true may be more disturbing than you’d hoped”.