NOW MagazineNewsAchoo all over you with swine flu

Achoo all over you with swine flu

My snotty solution to sleeve-sneezing 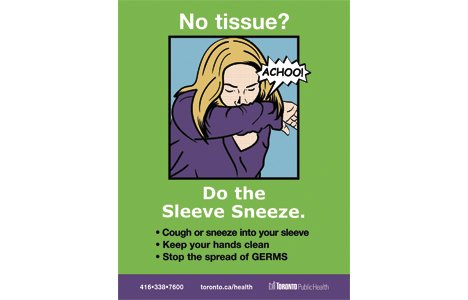 The Calabrian music program on CHIN Radio is interrupted for an urgent message in English. Sneeze into your sleeve![rssbreak]

This bizarre bit of advice has picked up currency since it appeared on bus-?stop ads last year with an accompanying graphic that looks like it came from a manual on strange foreign customs.

It just so happens that the radio warning comes on while I’m in the midst of a sneezing bout that will last about nine hours. The longest was 18 or 20 hours with a four-?hour break for exhaustion before resuming the next day.

Naturally, I think the radio is talking to me. No one sneezes more than I do, and I could be the only anglophone listening to songs in southern Italian dialect. Of all my millions of sneezes, not one has gone up my sleeve.

Apparently, the strategy is the benign element of a campaign that also features the looming prospect of mass inoculations said to fight the much-?hyped H1N1 virus, formerly known as swine or NAFTA flu.

As an involuntary expert on sneezing, let me say, the sleeve tactic raises all sorts of questions. What’s the matter with a hanky? That’s what I use. I’d give a lot to get another double-?layered beauty like those I wore out or lost, made in Japan.

If public health staff are going to all this trouble, they could simply mandate the carrying of a hanky that is reusable, avoids tree-?killing for tissues and is certainly both more hygienic and mannerly than honking into one’s clothes.

I mean, you sneeze into your sleeve, and then what? You’ve a snot-?soaked sleeve to contend with. And unless they’re coming up with a multi-?sleeve sneezing shirt, a chronic sneezer such as I is out of luck after two achoos.

Have the designers of this advice really thought it through? Clothes are often of synthetic fibres that are snot-?resistant. A sneeze into such stuff is not absorbed it merely slides off and drips onto surfaces where even someone wearing a SARS mask and latex gloves could pick it up.

What about short sleeves? Sneeze into your shoulder? Or the sleeveless gear some women wear all year? Will sneezing into a stranger’s sleeve become a new pickup technique?

Sneezing, unlike hiccups, almost always comes with advance notice, time to grab your hanky or a tissue from the boxes that have suddenly become ubiquitous. That’s why I suspect this whole scheme is yet another ploy to give insecure Toronto an identity – to brand it.

How about recording a song in the instructional-?dance-?craze style with specific directions. Suggested rhymes: arm, harm, please, sneeze. No more until I get an agent. Then get the crowds hanging around Yonge and Dundas anyway to perform the dance, bung it on YouTube and Toronto’s place as the snotty-?sleeved capital of the world will be secure.

Of course, there may be slight side effects. “Oh – you’re from Toronto,” as a New Yorker quickly recoils from an embrace, eying the wet, stained sleeves that mark a dutiful Torontonian.

The cartoony cuteness of the disgusting ad contrasts with the ominous nature of the whole promotion of flu hysteria. My sneezing, the result of myriad allergies, is viewed as a threat to public health. A heavily scented woman or man decides to sit in front of me on the streetcar. This sets off a sneezing fit. Other passengers run for cover. Since the publicity blitz, it’s as though I’m travelling with a biological weapon.

And this is with each sneeze muffled and contained in a hanky. Imagine if I were following the government-?recommended method with a leather jacket on. No use trying to explain that allergies are not contagious. Surveillance cameras provide proof of my dangerous behaviour.