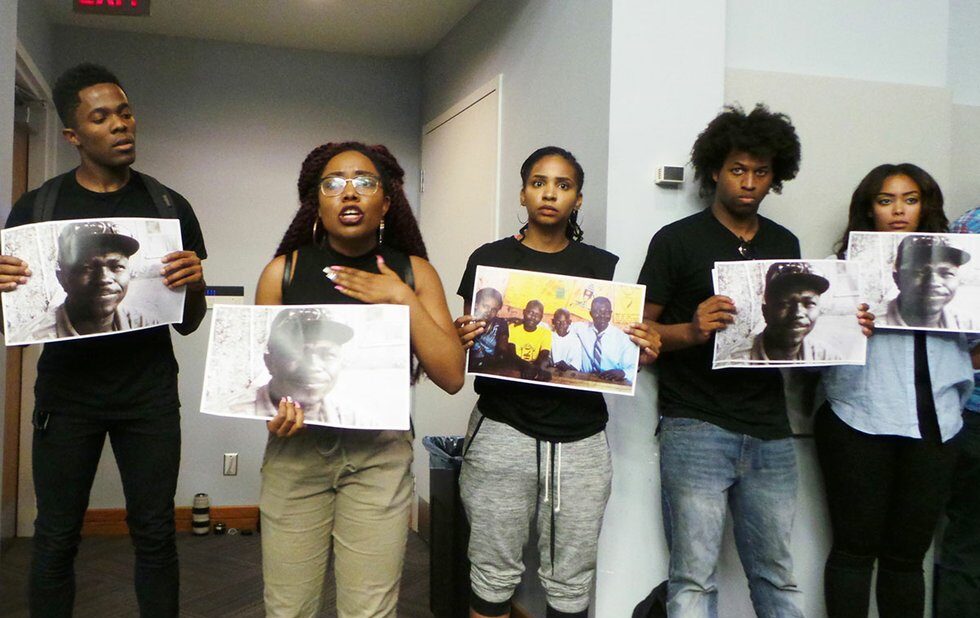 With the conclusion of the coroner’s inquest into the police shooting death of Andrew Loku, a coalition of community organizations and advocates has come together to begin a coordinated effort to see that the jury’s 39 recommendations do not meet the same fate the 500-plus recommendations made by previous inquests into police shooting deaths of Black men in health crisis and remain unimplemented.

Until the inquest, the identity and actions of the officers involved in Loku’s shooting, constables Andrew Doyle and Haim “Jimmy” Queroub, had remained hidden in the reports of the province’s Special Investigations Unit (SIU), which decided there was no grounds to charge the two, and in the Toronto police chief’s mandatory internal review.

The officers’ evidence and the CCTV recording from the hallway where the deadly encounter took place provided the first full public account of what happened. The glimpse the inquest provided into the police mindset was eye-popping. And brought into full view the weak internal and external systems of accountability to which police actions are subjected when they get it wrong.

Particular attention should be paid to Doyle’s and Queroub’s separate but very similar testimony. It suggests that training and data analysis will not prevent more police shootings – unless there is a more rigorous selection of officers and much tougher and truer accountability, be it through the SIU or chief’s office.

Andrew Loku, an African man from South Sudan, lived in one of the apartments in a building on 502 Gilbert Avenue in the northwest of Toronto, near Yorkdale Mall. Loku was a client of the Canadian Mental Health Association, which accommodates people with mental illness in the building.

Shortly before midnight on July 4, 2015, calls were made to 911 by a few residents. One of the callers claimed that the man had a hammer, was threatening to kill people and was destroying the walls in the hallway. The message put out by the police dispatcher said that the man was “African.”

Toronto police constables Andrew Doyle and Haim “Jimmy” Queroub, who were on patrol, took the call.

Doyle had been with the Toronto police service for 10 years. Queroub had completed his probation just three months earlier. Doyle was his “coach officer,” mentoring Queroub as he made the transition from the classroom to the street.

The recording on the building’s CCTV system, which was played for the jury, shows Loku striding down the hall, a hammer in his hand. On that late summer night, he is dressed for a cold day.

Two neighbours, a man and a woman, come out of their apartments. Since there is no sound, we don’t know what is being said. Loku is seen talking to the man, gesticulating with his hammer.

According to the officers’ testimony, they tried to get Loku’s attention as soon as they arrived on the scene. Their guns were already drawn.

The CCTV recording shows Loku turning to face the end of the hall, as if hailed by someone. He starts moving, saying something. He raises both his arms, as if in a gesture of surrender. The recording cuts out. By the time it comes on moments later, Loku has been shot. A mere 21 seconds would elapse between Doyle and Queroub’s arrival and Loku’s death.

According to the officers, Loku was some 20 feet away from them, although Loku family lawyer Jonathan Shime introduced evidence to suggest Loku was further away, closer to 28 feet. It’s an important difference.

Officers live by what’s known as the 21-foot rule, the informal but widespread notion that someone holding a weapon (that’s not a gun) can still pose a deadly threat and shooting to kill rather than disarming is the only option.

According to Doyle, when Loku, still walking with arms raised towards them, was at a distance of six to eight feet, he fired two shots. Both hit Loku in the chest and he fell, like a tree, straight down on his face.

At the end of their separate day-long testimonies, Doyle and Queroub expressed regret for the loss of Loku’s life. However, both the veteran and the rookie stated bluntly that, if faced with the same situation, they would do the same thing all over again.

For Black community members attending the inquest, the CCTV recording and the officers’ testimony raised many questions about the thinking and the culture that affect police officers’ decision making.

1. How did the information that they would be dealing with an “African” man with a hammer who was reportedly “destroying” property and threatening life affect their assessment and judgment?

Doyle and Queroub, under questioning, claimed that they made no plans on how to deal with the situation before arriving on the scene, and, in fact, did not talk much, except for Doyle coaching Queroub on getting there safely but quickly. Queroub was driving.

2. Why did they decide to draw their guns and to yell from the moment they got there, and fail to adjust their response as per their training in de-escalation the Toronto police provide all police officers?

Much was missed by the officers, including the unusual way Loku was dressed, and the fact there was no damage to property, contrary to what they had been told.

Queroub testified he could not even remember the order issued by the chief of police about de-escalation just as he could not remember ever having seen the diagram that the Toronto police trainers use to train every single cop in de-escalation techniques.

3. Did the sight of a Black man with a hammer so influence their judgment that they saw nothing else and did not take the time to make a proper assessment?

The officers testified that Loku seemed intent on attacking them.

But why did Queroub interpret what he thought he heard Loku say to him – “Whatcha gonna do? Come on, shoot me” – as a dare, a “suicide by cop,” instead as Michael Blain, the Coroner’s legal counsel suggested, a simple question?

The suicide by cop theory has been used to justify other police shootings. And the inquest also heard expert testimony from Dr. Kwame McKenzie, a leading expert in race and mental health, on how racist ideas get embedded as implicit or unconscious biases.

The uncomfortable conclusion: Doyle and Queroub only saw a Black man with a dangerous weapon getting ready to attack, approaching them, taunting and daring them. There was none of the kind of assessment that police officers are supposed to make to decide on an appropriate course of action.

But the police chief’s internal review of what took place on the night did not ask any of these questions. It concluded that Loku was responsible for his death, while Doyle and Queroub acted lawfully and followed all policies, procedures and training.

How many more Doyles and Queroubs are out there, confident that their police service and union have their back?