NOW MagazineNewsOn the trail with the Bernie Sanders campaign

On the trail with the Bernie Sanders campaign 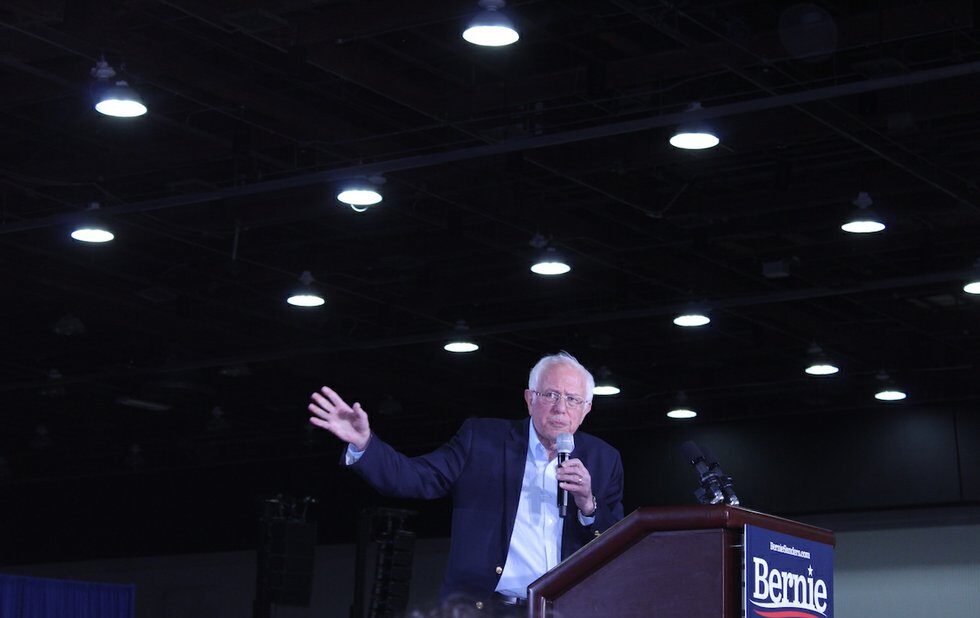 As a Canadian Bernie Sanders supporter, who is also a U.S. citizen, I decided to get away from futile political spats on social media and get on a Greyhound to attend Sanders’s rally in Detroit ahead of the Michigan primary last weekend.

I completed a graduate degree at Ohio State University last spring and didn’t want to leave Ohio after I graduated, but once my health insurance ran out I didn’t feel I had a choice.

I’m lucky I’m a citizen of a country with universal healthcare, but unless Medicare-for-All, Sanders’s signature policy proposal is implemented, I won’t be moving back to the U.S. even if it means I can’t have the career I want.

But I arrived in the Motor City with a heavy heart as Sanders’s chances of winning the Democratic nomination are increasingly diminishing.

I’ve been feeling angry at the U.S. media’s bias against Sanders, referring to his supporters derisively as “Bernie Bros” – or as Chuck Todd of NBC called us, “online Brownshirts” – and implicitly conjuring an image of angry, young men harassing people on the internet.

My other big grievance of late is with Sanders himself. He has been too soft on his rival for the nomination, former Vice President Joe Biden. I find myself in agreement with those that say Sanders owes it to his supporters, at this point, to take the gloves off.

One of the things I hope to discover is how other Sanders supporters and people involved in the campaign on the ground in Michigan and Ohio feel about issues that have rankled me while in front of my laptop in Toronto.

At the front of the line to the rally in the TCF Center in downtown Detroit, I find a group of college students. I tell them that I’m trying not to feel hopeless about Sanders’s chances. They don’t feel the same way.

“If we felt hopeless we wouldn’t be here,” says Rebecca, a creative writing major at nearby Saginaw Valley State University.

I ask them about the media’s “Bernie Bro” narrative. Smarani, a major in sound engineering at the University of Michigan, the one person of colour in the group, says it frustrates her “because that’s not my demographic.”

I also want to know if they have insights into the youth vote problem. Sanders polls significantly higher among young people, yet they haven’t shown up in the numbers the campaign had hoped for.

Gehenna, a neuroscience major at the University of Michigan who will be voting for the first time in this primary, expresses frustration about some of her peers.

“It’s very hard when they go ‘I don’t know anything. I haven’t researched anything…’ This is our big election. It’s time to be involved.”

“The worse we get is, ‘I don’t care,’” adds Smarani. “That really gets under my skin, knowing that in the past people had to lose their lives for the right to vote,” she says.

Tyler Linfesty, an aerospace engineering major at the University of Michigan, is the only one in the group to give his full name. He informs me he is the internet-famous “plaid shirt guy” who was tossed from a Trump rally 2018 for making faces while the president spoke. He is wearing the same plaid shirt today.

He says it’s hard to convince his peers to get involved in the political process because the 2016 Democratic primary was, in his words, “rigged” against Sanders. Many of his peers believe “You can’t beat the process. The process is always going in favour of the wealthy.”

But when I ask the group if they will vote for Biden if Sanders loses, all but one immediately nod yes. I confess that part of me is disappointed that such a conservative Democrat as Biden can so easily count on their votes, knowing this leaves the Democratic establishment little motivation to include at least some of Sanders’s progressive platform. 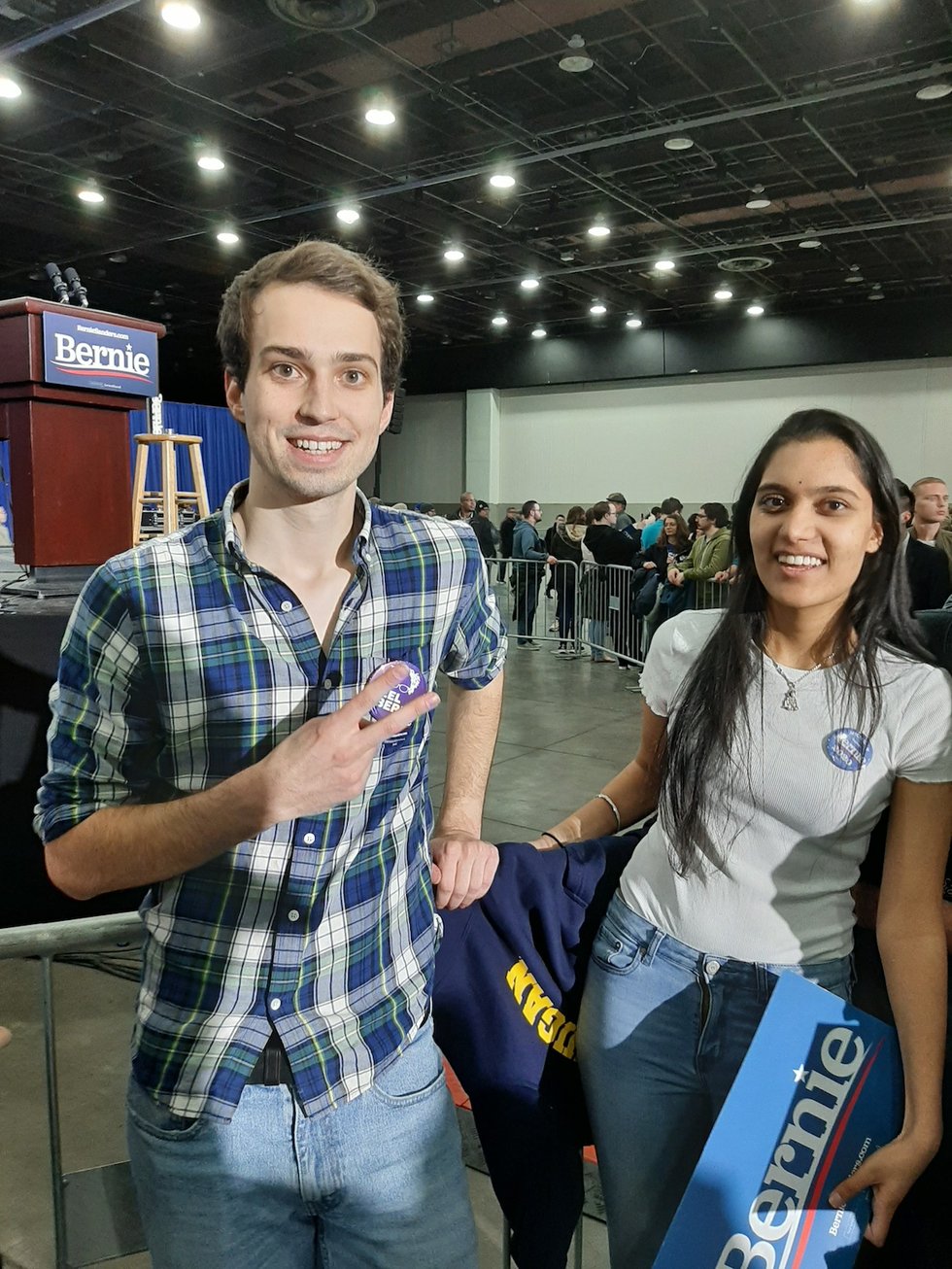 I walk into the rally feeling like I have nothing to show for my investment in the Sanders movement but a Bernie bumper-sticker (and I don’t even own car). Maybe I’m just jaded.

Most of the crowd in the packed conference center are under 30. A good 75 per cent is white, a definite problem for the campaign. African-Americans over the age of 45 have gone strongly for Biden in every state so far.

I talk to two volunteers for the campaign. Lauren Montgomery, a freelance photographer and Aisha Imran, an undergraduate business student at nearby Macomb Community College. They both have been doing campaigning in the significant Muslim community in Hamtramck, Michigan, of which Imran belongs. It’s been tireless work, she tells me.

When Democratic House Representative Rashida Tlaib takes the stage to rally the crowd she says that “This is a once in a lifetime moment in our country to elect someone who won’t sell us out.”

The place erupts, naturally, when Sanders walks on stage. He is direct about his differences with Biden. Sanders opposed the North American Free Trade Agreement. Biden, then a senator, voted for it. Some link Trump’s 2016 victory to NAFTA, which led to massive industrial job losses in the “Rust Belt,” which includes Michigan.

“If we are going to defeat Trump,” shouts Sanders, “… it is going to be very hard for a candidate who voted for these disastrous trade agreements.”

And yet he also refers to Biden (as he has done since the campaign began), as his “friend,” which arguably softens the message.

While Sanders is speaking, I notice a teenager leaning over a railing closest to the stage. She is looking at Sanders with awe. She is looking up at what her future could be. And my heart breaks for her. 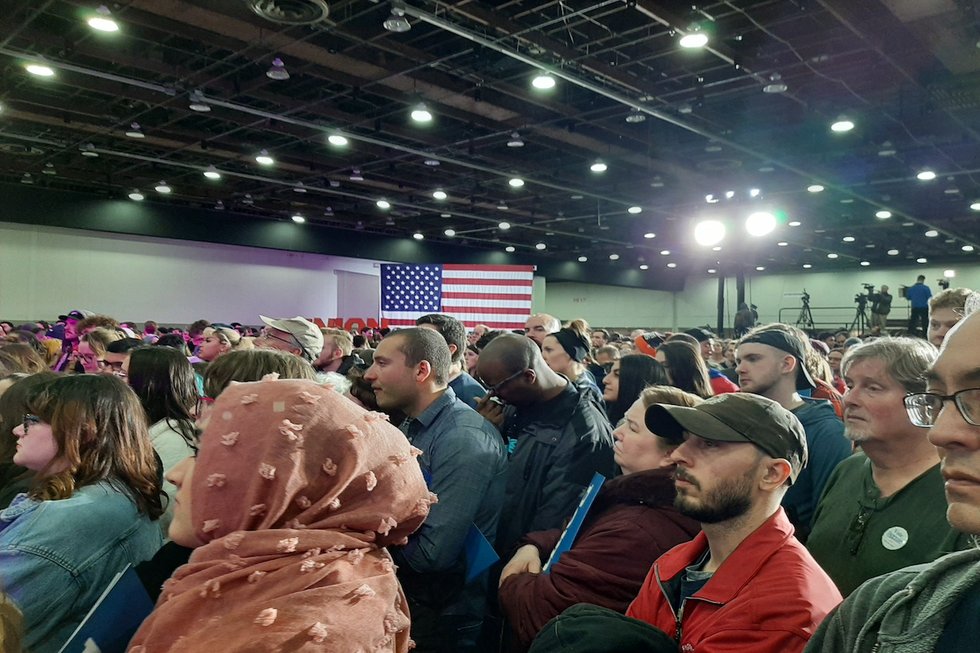 The next day I’m at a “barnstorm” meeting or about 30 people in the back of a pub in Columbus, Ohio. It’s standing room only and Sanders staffers and volunteers are throwing an organizing party.

I hear personal testimonials from volunteers about why they’re supporting Sanders. One says she lost their fiancée, who had no access to mental health care, to suicide. Another, a student, relates that she’s thousands of dollars in debt. After the stories, I sit in on a tutorial on how to use the official Sanders app to message your family and friends so they know where and when to vote in their state.

But Sanders will lose in Michigan. Jessica Bright, the state director of the Bernie Sanders campaign in Ohio, tells me after the vote that the campaign is more focused than before on persuading voters that Sanders is a more electable candidate against Trump than Biden.

The next afternoon, I canvass in Clintonville, a largely white, middle-class neighbourhood, on what turns out to be the warmest day of the year so far  – close to 20 celsius. There are buds sprouting on the trees. It seems like ideal weather for canvassing until I realize it’s also weather that makes people not want to stay indoors. For every five doors I knock on, I get an answer at only one.

Minus a couple of decided Sanders supporters, most care about beating Trump more than any other issue. Following the campaign’s guidelines, I don’t say anything negative about Biden, but point out that there is smoke there for Trump to attack Biden over his son’s involvement in Ukraine. Biden will also be vulnerable to accusations that he is “bought” due to his wealthy donors. And then, of course, there is his record on trade.

I really can’t tell how convincing I am. The people I speak to are friendly and considerate as is the Midwest way.

Back at campaign headquarters the “victory captain,” Patrick Pohler, asks me how it went. I tell him how I spent most of my time making the electability case and Biden’s vulnerabilities against Trump. “Did that seem effective?” he asks. I answer honestly. “I don’t know.”

I admit to him that I am feeling less than optimistic about Sanders’s chances.

“Whether Bernie wins or loses, we’re training a lot of new people in grassroots organizing which means the movement will continue,” he tells me.

I feel momentarily cheered up. I had been focusing too much on why the Sanders movement seems to have failed as opposed to its remarkable accomplishments. I’m beginning to think nothing more could have been done against the Democratic establishment. Perhaps believing that if we just galvanized enough young people that the Democratic Party would listen to us was our biggest mistake.