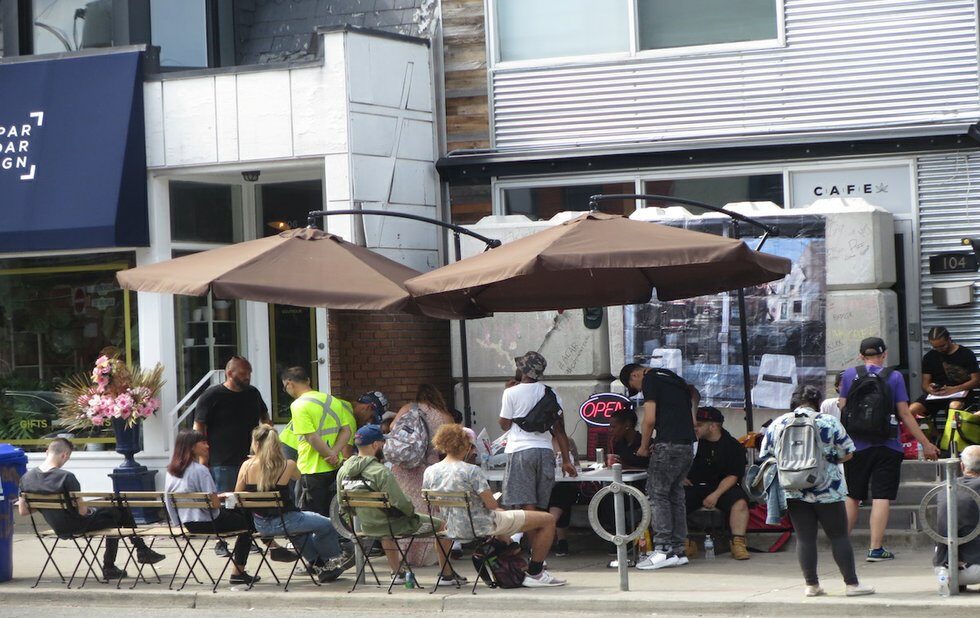 Just as the cat came back the next day, so too have the four unlicensed CAFE (Cannabis and Fine Edibles) cannabis shops shut down by the city in recent weeks.

The city has tried unsuccessfully multiple times, together with 70 provincial bylaw charges, to close the shops down permanently, issuing closure orders, installing giant concrete slabs in front of locations and even welding doors shut. Police have also made arrests. But it has all been to no avail – for now.

The city’s efforts have not stopped the unlicensed herb purveyor from plying its trade on the sidewalks on makeshift counters in front of the shops.

CAFE staff now stand outside waiting to take orders in front of concrete slabs installed by the city to block entrances to the stores.

Most of the slabs are covered in graffiti and the hashtag #OPENMARKET spray painted on them. Chairs line the sidewalk in front of the Harbord location for customers to sit while waiting for product. A 30-minute wait is not uncommon, but some orders can take up to two hours to fill.

The front door of the CAFE location on St. Clair West is blocked by a concrete slab, but not the broken storefront window. During business hours a man or woman stand behind a curtain hung in front of the broken window. You can only see their feet. You place an order on the street and soon after the purchased item arrives from behind the curtain.

When CAFE was doing business indoors, it was a city bylaw infraction. But “once it happens outside… then it becomes a Toronto police issue,” Toronto police Constable Alyson Douglas-Cook told the CBC.

At least 18 arrests have been made in front of CAFE shops. The police have also seized iPads with customer information, debit machines, pot products and walkie-talkie radios during arrests. 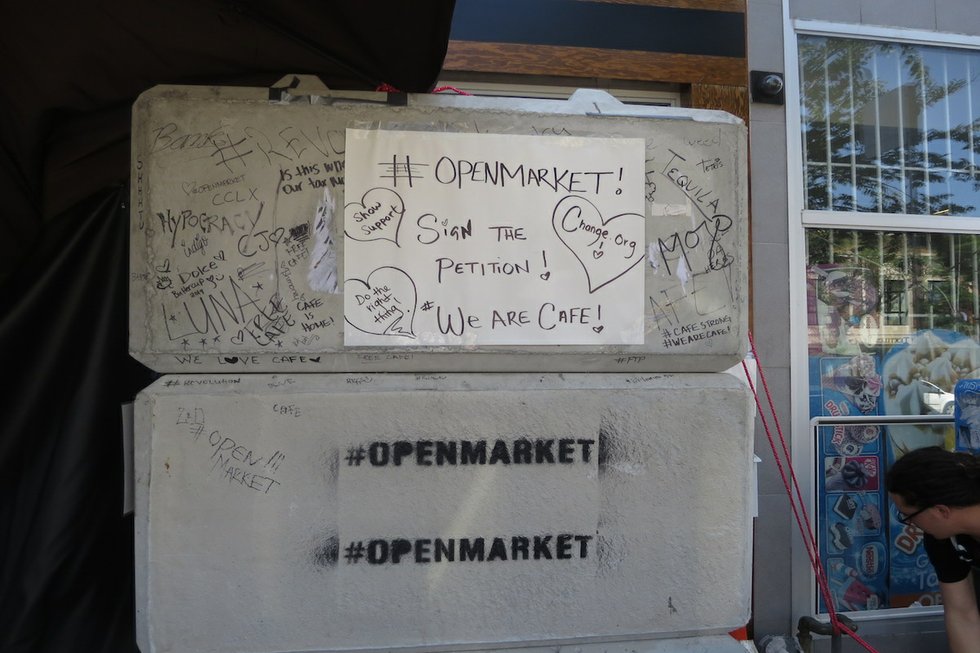 A Toronto woman I spoke with says she passed the barricaded CAFE on Harbord last week on her way to work and inquired about buying some hash. She checked CAFE’s website beforehand to confirm they had what was described as red hash in stock.

“My preference is blond, but I decided to give it a shot,” she says. They took her order and told her to come back in a couple of hours. When she returned after work, “there was a crowd of maybe 10 workers and 25 or so customers, and I was politely directed to the short pickup line.”

She says her three-gram hash purchase was “sensibly packaged in a thick plastic envelope with a childproof locking mechanism.” The atmosphere was “very professional, courteous, friendly and even quietly festive.” She says, “there was an air of happy minor defiance and camaraderie. And the hash was good.”

All the shops have a table in front where you can sign a petition urging “reasonable dignified access to cannabis.” CAFE workers say they are not worried about more arrests. They believe they will only be hit with a fine at worst.