Mayor keeps it real when it comes to cash 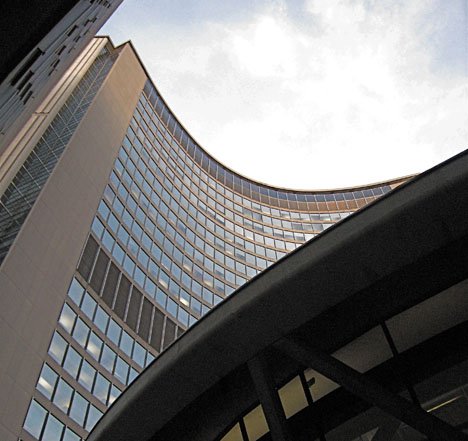 Torontonians got their first taste of the 2010 operating budget today when Mayor David Miller proposed a 4 per cent hike in residential property taxes. His point was simple: there’s no free lunch.

“Anyone who tells you that they can freeze our cut your taxes and provide the vital services we all rely on … is simply not telling you the whole story,” his speech declares.

Some of his whole-story highlights:

“Toronto has the lowest residential property taxes in the entire GTA.”

Sure, your McMansion on the edge of a farmer’s field is mighty cheap compared on a square foot scale, but by value, Torontonians get a good deal. A $407,374 home in TO pays $2334. Meanwhile that same house costs $3037 in Markham.

Where the cash goes:

“70 per cent of property taxes go to pay for three things: emergency services, provincially mandated health and social services, and the TTC,” reads the statement.

The mayor goes on to indicate that TTC costs are shifting into a more sustainable model (from our standard one-time handout scheme) – one where the Province will “provide the city with permanent sustainable transit operating funding, commencing in fiscal 2011.” I’ll believe it when I see it, with December 1, 2010 the day to watch for the conclusion of the Ontario Partnership Agreement.

“The budget does not include the sale or monetization of any city asset,” says the mayor.

Which is too bad because I’m sure there’s some noble soul just waiting to buy hydro and graciously gouge the shit out of you. As with anything the simple short-term solution of privatization is a long-term loss. Having some foresight is refreshing, even if it means applying pragmatic cost-attenuation.

So, unless you don’t care about vulnerable people, transit, having people put out your burning house or get your heart beating again, cutting crime or being eco-conscious, there’s not much choice here.

Why not? Because we have to balance the books.

“Unlike the federal and provincial governments – the city cannot run a deficit – even during a worldwide recession,” said the mayor in his statement.

Perhaps most important in all the budget talk is the idea that we’re at the blueprint stage. As we shift through councillor hearings, stakeholder deputations and reviews (here’s the schedule for the ongoing budget talks), there will be barking, likely to the tune of vilifying anyone uttering the word “tax”.

If you’re interested in the mayor’s entire speech, here’s the emailed statement:

I want to first take the opportunity this morning to thank all members of budget committee and City staff for tremendous work over several months putting together the balanced budget we will begin considering today.

I know that this year has been especially challenging given the City’s financial circumstances and the global economy.

The budget is far more than a balance sheet.

It is the blueprint we use to implement the many programs and services that keep this City liveable, prosperous and provide opportunity for every single resident of our city.

Today I want to underscore the important steps that have been taken in the development of the proposed 2010 Operating Budget such as prudent management, wage restraint and tax increases, and what the facts behind the City’s budget mean to our residents and business communities alike.

We have achieved many great things over the past several years as Toronto’s quality of life, our business environment and the actions we are taking to protect our natural environment continue to win accolades both here and globally.

Today’s recommended budget is consistent with those actions and my mandate as Mayor and the priorities of this Council.

The budget must be set within the confines of the City’s financial constraints.

Because, unlike the federal and provincial governments – the City cannot run a deficit – even during a world-wide recession.

Above me – and in front of all of you, is a streetscape that illustrates some of the City’s many services.

I invite everyone to examine this illustration and consider what our City would be like without these services being available in our community.

In the weeks ahead, there will no doubt be considerable discussion about our City’s finances.

I welcome the discussion and debate.

Any discussion on the City’s budget should keep in mind the following facts:

ONE. Toronto has the lowest residential property taxes in the entire GTA.

While it is not often the headline, it is worth repeating that if you live in a condominium or house in this City you pay less in residential property taxes than anyone in the 905.

For example, the average home in Toronto has an assessed value of $407,374.

The matter is settled. If you own a home or condo in Toronto you paid less residential property taxes in 2009 than any other municipality in the GTA.

In addition, residents should know that about 70% of their property taxes go to pay for three things: emergency services, provincially mandated health and social services, and the TTC.

TWO. Our city is a compassionate community where people help and support one another in tough times.

Last year, this government, as part of the Toronto Helps program, launched a series of measures aimed at helping people to keep their housing and find work.

THREE. This government has cut business taxes by more than $190 million since 2006.

If the measures recommended in this budget are adopted that number increases to well over $250 million.

FOUR. For the past two years Toronto has frozen development charges to assist the construction and development industry. This has meant lower costs for a sector adversely affected during the current recession.

Together, these measures demonstrate the very high priority this City government has placed on supporting business and our economy.

In addition, the creation of two new corporations – Invest Toronto and Build Toronto – will see us redouble our efforts and produce results that will benefit the entire region.

FIVE. Toronto’s user fees for programs cover only a portion of the costs associated with delivering the service.

In fact, user fees for recreation cover only about 30% of the cost of programming.

All of us deserve the opportunity to learn and experience new things. The kinds of programs the City provides build the inclusive communities that we value.

It’s a fact that the fees Toronto charges are competitive and consistent with those charged by surrounding municipalities.

Although user fees make up only about 15% of the City’s total revenues, without this money the City would be unable to provide the programs that make Toronto the great City it is.

SIX. This year’s budget, like those before, includes spending restraint, efficiencies, some adjustments in service levels while ensuring our residents continue to receive the programs and services they rely on.

It’s also a fact that many of the budgets presented over the years have included salary increases for some employee groups that have been ordered by arbitrators – where the results are not settled by the City. The Arbitrator is not required to set salaries as the City demands.

However, it’s also a fact that the wages of the majority of other City employees remain comparable to other municipalities. Following the recent strike the City achieved a settlement that included wage increases far less than those being requested prior to the strike and successfully negotiated the removal of a sick leave benefit that had been in the collective agreement for more than 50 years.

These actions have and will save the City money.

The budget is balanced through the use a surplus generated by these actions and through a 4% residential tax increase and a 1.3% business property tax increase. User fees and the TTC fare increase also contribute to balancing this budget, as does the uploading begun by the Province two years ago.

SEVEN. The City continues to have a structural financial challenge.

It’s a fact the City needs the province to return to the sustainable transit operating funding that was in place for decades prior to amalgamation.

We will be working with the Province of Ontario to conclude a Toronto – Ontario Partnership Agreement by December 1, 2010 to provide the City with permanent sustainable transit operating funding, commencing in fiscal 2011.

That remains the single largest ongoing operating budget structural challenge affecting the City each year and I look forward to working on the resolution of the matter.

EIGHT. The City has taken steps to extend part of its debt over a longer period of time.

Debt restructuring has reduced our operating budget by $33 million this year alone.

This strategy provides the City the flexibility it needs to address our operating budget challenge and still maintain the City’s excellent credit rating.

NINE. The budget does not include the sale or monetization of any city assets.

Any such initiative should only be contemplated if it’s in the best long-term interests of the City of Toronto and never be used to fund any operating budget shortfall.

TEN. You can’t have a great city for free

Anyone who tells you that they can freeze or cut your taxes and provide the vital services we all rely on..including:

Helping the most vulnerable amongst us

And, Protecting the Environment

..is simply not telling you the whole story.

I recently attended a very important event that didn’t get much coverage in the media.

The City recently opened a new Employment Centre at Metro Hall and at the same time partnered with the Y to open a new Y Café and expand the YMCA Hospitality Training Program.

The new Employment Centre is one of 15 through which the City offers residents a full range of employment services delivered by trained career and employment specialists.

The City’s employment centres had more than 85,000 visits last year and helped more than 21,000 Toronto residents find a job.

And, everyone should also know that the average number of cases predicted to access social assistance this year is about 105,000 which includes both families and individuals. This estimate reflects the increasing numbers of people that will need assistance as our economy recovers. In January, there were over 158,000 people in Toronto receiving social assistance.

The opening of the new centre featured some very thoughtful words from a resident that had benefited from the City’s employment services.

His words stood out as an important reminder that the work we do as a government to help people is important all the time. The positive impact we have on one person often ripples through a family, extended family and communities.

Its especially critical work to do when there are large numbers of people in our city without work and without a way to support their families.

Helping people live a good quality of life – where local services are delivered effectively and at a reasonable cost – and building a safe city where there is opportunity for everyone is the role of local government.

The support we give to fund these services is what makes our communities strong and is ultimately the hallmark of an inclusive and compassionate community.

Those are my ten budget facts.

This is the year to keep these facts in mind when listening to the debate that will take place.

These are the facts to keep in mind when asking questions about the City’s budget and the City’s finances.

Building a great City takes commitment, partnership and sacrifice – from all of us.

It continues to be my privilege to bear witness to the great things that are achieved when all of these attributes come together.

As Mayor, I see the traits of commitment, partnership and sacrifice coming together everyday as collectively we work to build an even greater Toronto.