Who will save historic structures from nasty development? 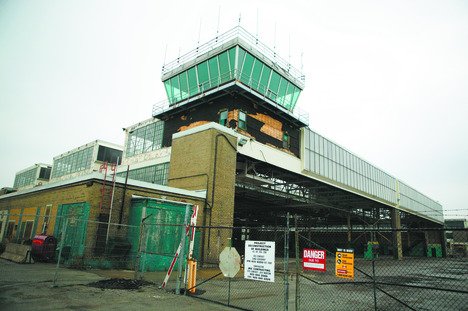 On an ugly day I approach the derelict buildings at Sheppard and Allen. The grey, rainy scene chimes with the unloved appearance of the two aging hangars – graffitied and marked for death by demolition – now clinging to life. Despite their storied past, only 45 days remain for a salvage pitch.[rssbreak]

What used to be rolling meadow and the occasional distant farmhouse back when these hangars were pumping out Mosquito bombers for the war effort are now condo sales centres and a convenient subway station. 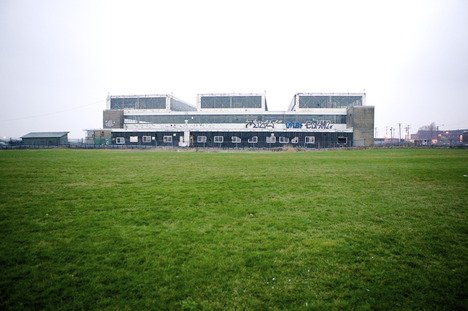 The pastoral scene of the 1940s may no longer exist, but one developer is interested in rescuing the structures. Can the historic site be preserved without surrendering it to tasteless retail?

The hangars, which stand near a Department of National Defence base near the eastern boundary of Parc Downsview Park, are part of Canadian heritage, says Lloyd Alter, president of the Architectural Conservancy of Ontario. “Built in 1944, they were responsible for 17 per cent of Canadian air production.”

Alter figures it’s a no-brainer to reclaim these massive buildings. “They’re real assets that can be used for all kinds of purposes.”

The Defence Department holds all the cards, even though the hangars are designated heritage sites. That fact doesn’t affect DND, which, until a 60-day demolition freeze began on November 18, planned to tear them both down.

The developer now formulating the one and only pitch for the property, Paul Oberman, is responsible for the beautiful Summerhill LCBO train station reno and the restoration of the Flatiron Building on Wellington East.

“The easiest thing would be to table an offer to buy the buildings from the DND and give it a monetary reason [to not demolish everything],” says Oberman, who says he drove by the buildings and figured he could repurpose them. 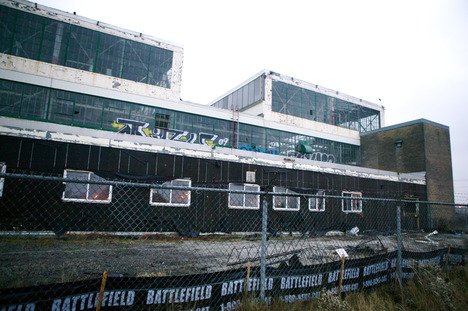 “It’s what I do,” he says, referring to the salvation jobs he has undertaken as president and CEO of Woodcliffe Development.

What makes these particular structures different is their scale. Oberman thinks mixed-use options have to be considered. “That might ultimately be the best way to save these buildings,” he admits.

So what kind of mixed use are we talking about?

At this point it’s all speculation. There’s always the danger of a mixed-use design ending up like the Amphicar: interesting to look at – even admired – but functionally bad as a car and bad as a boat. In this case, bad as public space and bad as retail.

How about a museum? Oberman ponders the possibilities. “The Air & Space Museum located in Downsview is out of space,” he notes. “They have aircraft sitting outside rusting.” He adds that the Canadian Aviation Expo is looking for a permanent home, too.

There’s no denying that the hangars would be a suitable place to showcase Canada’s noble aviation heritage, from the Mosquito to the Dash 7. But that would have to be just part of the equation.

Another element (and here’s where it gets turbulent) might be actual aviation use. Oberman is a pilot and, like most pilots in Toronto, is well aware of the fact that Buttonville Airport’s days are numbered. Frequent fliers will need a place to land, and, well, here are two unused hangars.

But would this takeoff zone actually have a landing strip? That’s tougher.

“The airstrip is currently owned by Bombardier,” says Oberman. “But that’s not to say it couldn’t or perhaps shouldn’t be used as a reliever airport when Buttonville is gone.” He quickly adds that that’s a slippery slope that could put the kibosh on preservation plans.

I can’t help considering this from another angle. Is it unreasonable to think a niche airline could share the space, too? Doesn’t Bombardier supply Porter?

Oberman actually has a track record of keeping his visions true to their historical value. The Summerhill LCBO isn’t a facade for a 30-storey condo, and neither is the Flatiron wedge. “I wouldn’t propose to alter the buildings in any way,” he promises.

The Mosquito bombers once built here helped create Canada’s furniture industry through plywood technology innovations. The Brick has all kinds of plywood furniture. Would it be a suitable tenant?

Oberman is reassuring. “I wouldn’t want to see a big-box retailer in these buildings.”

Dryden wrote to Minister of National Defence Peter MacKay suggesting that the hangars not be razed without exploring other options.

“The first question is why tear [them] down now?” says Dryden. “We’ve all had experiences where heritage buildings have no present use, get torn down, time passes and suddenly there could be a use, but it’s too late.”

The Roundhouse rail barns or Wychwood TTC barns spring to mind as good saves. “So much of what makes architecture work is odd juxtapositions. Here’s this roundhouse that doesn’t fit in contemporary Toronto,” says Dryden. “Well, change it in a way that it does fit.”

Dryden illustrates his point by citing the successful repurposing of other hangars on Parc Downsview Park lands. “Some of those old hangars and factory buildings are pretty remarkable.”

Remarkable and remake-able. One of the park’s hangars is now the 400,000-square-foot Downsview Park Sports Centre, offering everything from indoor soccer, to go-karting and, in 2010, a climbing gym and squash courts.

The other is home to the Canadian Air & Space Museum. A supply depot is now a merchants’ market, a Christian ministry, used clothing and electronics recyclers, film studios and a trade show space.

So it’s a little strange that Parc Downsview Park, which announces itself on a sign within sight of the endangered hangars, isn’t doing the same for the DND structures.

“During early negotiations [over the park’s boundaries] there was a lot of discussion over how much space was required for the DND operations in the Toronto area,” explains Parc Downsview Park chair David Soknacki. “The federal government drew the line on the map, and inside the DND territory fell the hangars.”

Ultimately, it’s the DND that will pick between the hangars’ suitor and wiping out history. Dan Dugas, from Peter MacKay’s office, says, “The minister has asked for more information on this so we know the best way forward on this issue,” and recommends calling back in a month.

Let’s hope by then some kind of balanced plan will have found its way onto MacKay’s desk, because it’d be a shame to see these historic edifices crumble or become, say, a Loblaws flagship store.