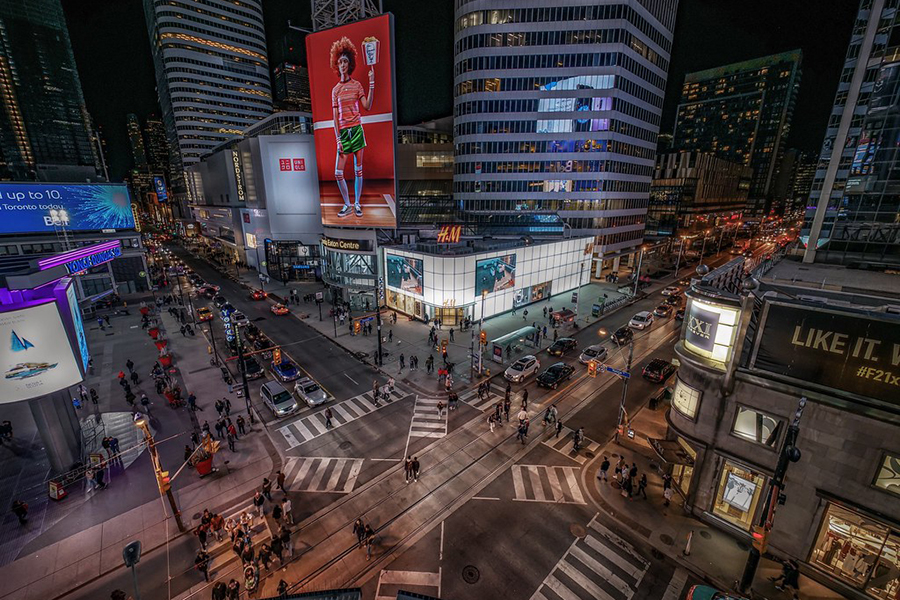 The video display will be 30 metres in height (about 8 storeys) and about 10 metres wide. It will be positioned directly behind the square’s performance stage.

They argued that it’s technically not a new addition to the square since it is only replacing two conventional billboards on the Citytv building on Victoria Street. They stressed that there are already a number of digital and traditional billboards of various sizes around the square, and that the new one is in keeping with the character of the square.

But the decision – made with little public participation and at one of Canada’s busiest intersection – raises a number of questions.

Is there any evidence that additional electronic advertising displays will improve the public’s experience of the square? More importantly, does the public want more billboards, or even like the ones that are there?

Most people dislike being subjected to massive electronic ads in public spaces. The presence of digital billboards is detrimental to the attractiveness, vitality and success of public squares.

I am not alone in asserting this. Project for Public Spaces looked at thousands of successful public spaces around the world. They found that the best ones share several key qualities: they are accessible; people are engaged in activities; and they are comfortable and conducive to social interaction.

Look at pictures of the most renowned and desirable squares in the world, such as London’s Trafalgar Square, Sienna’s Piazza del Campo and Rittenhouse Square in Philadelphia. What these feature most prominently are spaces for people – surrounded by attractive buildings, fountains, sculptures and lively cafes – not a digital landscape of video billboards. In fact, not one of the top-ranked public squares in the world has electronic billboards.

During the pandemic, the busiest parts in Toronto have been parks, ravines and waterfronts.

The Sign Variance Committee also failed to consider potential harms that can come with digital billboards, including their massive use of electricity, light pollution that can be harmful to humans and birds, distracted drivers and the potential negative health effects on people with autism and epilepsy.

Ads shown in Yonge-Dundas Square often promote alcohol use and display highly sexualized images at the same time as there is growing evidence that increased exposure to advertising reduces people’s self-esteem and sense of wellbeing and happiness – not to mention, makes people want products that are harmful to their own health and the health of our planet.

Arguably, the promotion of consumption in one of Toronto’s most important public spaces runs counter to the City of Toronto’s 2018 declaration of a climate emergency, and its commitment to cut greenhouse gas emissions to zero by 2050 or earlier, a goal that will require a dramatic reduction in consumption (at least by the wealthy).

Yonge-Dundas Square was designed more than 20 years ago. Since then the world has changed. We face new health and environmental threats. There are growing calls for greater inclusion, equity and community.

Now is the time for a public dialogue about the future we want for this important public space, especially as downtown Yonge Street itself is being redesigned.

As a first step to sparking a wider discussion, approval of the sign should be referred to city council for further discussion. At least then this consequential decision would receive scrutiny by members of the public and elected officials.

Michael Polanyi is an environmental activist and longtime Toronto resident.