If you’re feeling lost in a sea of modern tech mediocrity, look to analog to revive you. 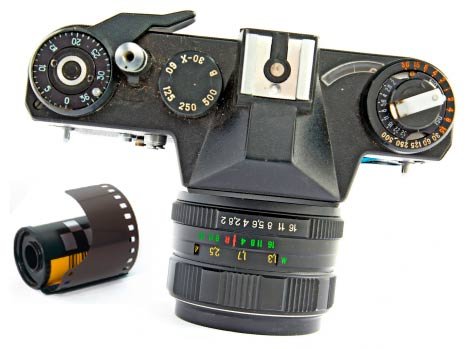 The lunch-break hike to King and Yonge could be better. It’s slushy, the wind is slicing through my coat, but I’m still excited. There are three rolls of film in my pocket, all shot New Year’s Eve. That’s New Year’s 2010, not 1990.

Yes, I still take photos on film, and while I have a digital camera, I’m not enjoying it much any more. About a year ago, digital shots started to seem disposable, inconsequential and dull to me. It was like they lacked a soul.

So I picked up my old 35mm cameras from the 70s and 80s, blew the dust off and have effectively revived my love of picture-taking. Anyone who feels the sheen wearing off the digital age might be well served by a little analog augmentation.

Walter Benjamin, in The Work Of Art In The Age Of Mechanical Reproduction, warned in the 30s that mechanization would rob irreproducible art of its “aura” – and film photography was his example of this robbery.

But we now live in a world where even that mechanized photography has found its aura-debaser in the effortless digital realm. And it seems to me this could apply to vinyl vs. MP3s, print vs. the Internet and, increasingly, books vs. e-readers.

So what’s going on?

He notes that it’s very common to hold onto the idea that an earlier medium was better once it’s been replaced by something cheaper, more popular and more accessible. And that’s not to say it wasn’t. It’s tough to argue that a highly compressed MP3 would satisfy the ears of a 70s high-fidelity “weenie,” as Potter puts it.

Of course, status yearnings are at play for those harkening back to the days before digitization freed us up to shoot bazillions of photos or stash 30,000 audio files on an iPod. But there’s probably more to it.

“You still have to go to Paris to see the Mona Lisa,” says Potter. “I think something is lost when it’s instantly reproducible or copyable. Lost is that sort of halo or unique position in our spiritual and aesthetic lives.”

To illustrate his point, Potter refers to a contest held by songwriter Sufjan Stevens where the prize was control over an original song.

“The winner could destroy it, give it away for free [online] or sell it. Instead, what the guy does is invite you to his house for tea and put headphones on you,” says Potter. “It’s a manufactured scarcity in a world where everyone could have it on their iPods. I find that appealing.”

It’s also humbling. Where a digital photo can be taken, retaken, recomposed, adjusted in RAW – all at no cost – film can be a harsh critic. Your failure can take days or weeks to appear, and your shots could be, well, shot. Somehow I find these limitations inspiring.

“That’s why there’s such a thing as a sonnet. Constraints create opportunities for a new kind of creativity,” says Potter tells me.

That’s one reason film is still on the curriculum at OCAD. “Part of the experience of making art is the process, and not simply the end image,” says OCAD’s chair of photography, Peter Sramek.

“Digital encourages people not to pay attention,” he explains. “It’s great for experimenting, but you have to be an observant photographer, so you have to slow it down a little.”

Slow it down. That’s good advice. If you’re feeling overwhelmed by your computer world, insert an analog pause. You could say the same for a record. You can’t hop on the subway with vinyl. You have to commit to placing yourself in a state that’s stable enough not to skip the needle. Relax, listen, check out the album art.

Sramek sees an interesting shift. “Right from September, the darkrooms were busy. The last few years hadn’t been so strong in the analog darkrooms.” An OCAD survey of seven major North American art universities, he says, confirmed all are running strong film-based programs.

The solidity of pre-digital shooting helps anchor a life increasingly pushed into digital clouds. “For me, it’s [important] that film exists as a physical object I can look at, hold in my hand,” says Sramek.

I have to agree. The chemical trace of a moment gone by is permanently imprinted on emulsion-coated plastic. It will stay that way – no overwriting. No redos.

This notion applies even more to Polaroid film, which produces just one copy of its captured moment. Sure, you can scan it infinitely, but there will only ever be one print – a difference that elevates that medium slightly above a negative.

The company stopped producing film back in 2008 but investors and diehards have banded together to save the seemingly obsolete medium. “Polaroid abandoned [film] because they compared recent sales to the 70s and 80s,” says Marlene Kelnreiter of The Impossible Project, the group that saved the machinery needed to keep Polaroid film alive.

They took over the last Polaroid factory in the Netherlands and got to work creating the right chemical mix to return Polaroids to the people. “There will be a new film from the Project, a monochrome film, in February,” says Kelnreiter.

So don’t just take it from me: digital is overexposed. Far from fading away, the canister is, you might say, developing a whole new following.