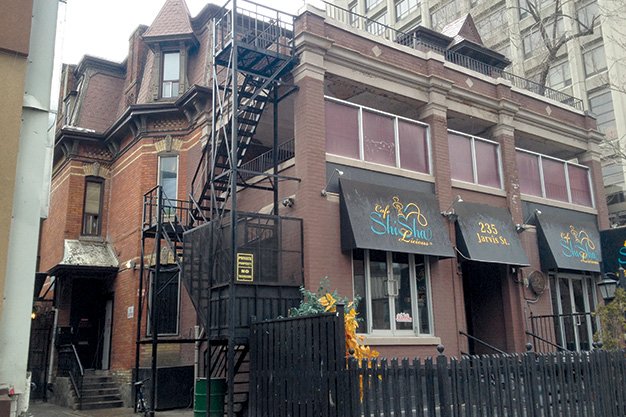 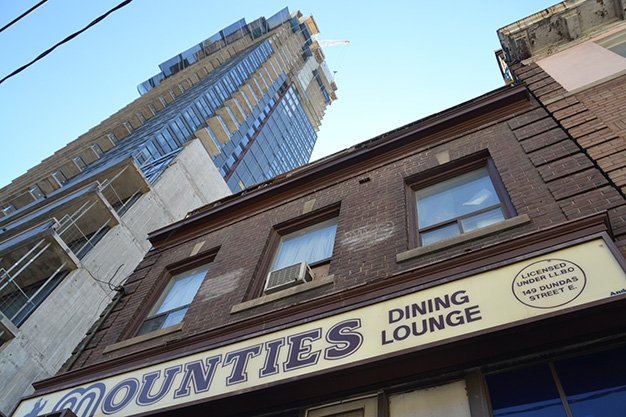 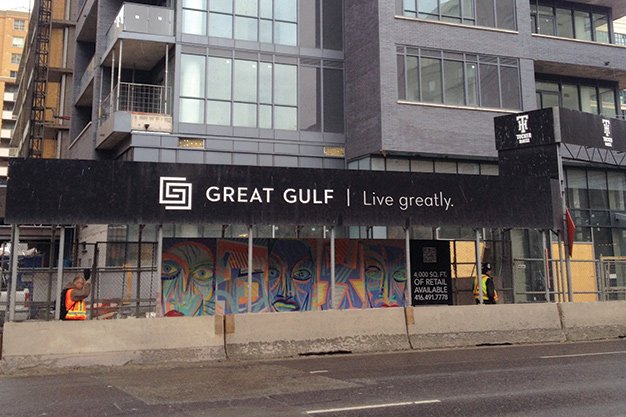 When Gaetan Heroux takes in Toronto’s skyline, he sees a concrete tidal wave headed right for the downtown east side.

The area roughly bounded by Church and Parliament between Dundas and Shuter has been a cradle of low-income housing, rooming houses and hostels, a hub for Toronto’s marginalized for more than a century. But as in many parts of the city feeling the pressure of development, signs of gentrification hint at a different future for the neighbourhood.

“It’s like a tsunami coming toward you,” says Heroux, pointing at the thicket of towers going up on the horizon.

A long-time volunteer with the Ontario Coalition Against Poverty (OCAP), Heroux began working with a social service agency in the area in the 1980s. He’s worried the remarkable pace of change will make the nabe’s impoverished residents “very, very vulnerable.”

In the four blocks bounded by Church, George, Dundas and Shuter, eight developments are either proposed, approved or under construction. When completed, the buildings will add 286 storeys to an area of less than 1 square kilometre.

Those projects are likely only the beginning. Since the redevelopment of Dundas Square to the west and Regent Park to the east, land values in the downtown east have been on the rise. Its low-density properties are becoming more attractive to developers, and several owners have already voiced their intention to build.

Citing the need to “revitalize,” the city is sanctioning new planning policies that will allow the construction of higher, denser buildings. They’ll be too expensive for people who currently rent rooms by the week at places like the Inglewood Arms Hotel on Jarvis.

Central to this revamp is a controversial council-approved plan to redevelop Seaton House, the city’s largest homeless shelter, which has long been blamed for bringing drugs and crime to the neighbourhood. The facility will be modernized, but its remake will also mean the loss of some 400 of its 543 emergency beds.

While Heroux acknowledges the social problems plaguing the area, he worries that redevelopment will push poor people out and cut them off from the many support agencies that have operated here for decades.

“What historically has been a working-class neighbourhood that has welcomed the unemployed and the poor will no longer be,” he says. “Ultimately you have to ask, ‘Well, what kind of city do we want?’ And if the city is ready to displace the majority of [poor] people who live in this area, we’re in trouble.”

The intersection of Jarvis and Dundas is a major flashpoint for the influx of development. The 42-storey PACE condo that replaced a derelict strip mall on the southwest corner is nearing completion, and a 45-storey tower dubbed Dundas Square Gardens is slated to be built on top of the Hilton Garden Inn on the northeast. On the southeast corner, a developer is proposing a 47-storey condo that would replace a half-block of retail stores and a 44-bed rooming house at 235 Jarvis.

The rooming house is not the nicest place residents say it’s infested with mice and plagued by drug activity. But for years it’s been home to vulnerable people who can’t afford to live anywhere else. A single room currently goes for about $560 a month. And even though the city has yet to approve the condo that may replace it, the building is already being cleared of residents.

Michael [not his real name] is a 51-year-old tenant of the rooming house. English is not his first language.

In January he received a notice asking him to meet with the property’s owners at the Tim Hortons next door. When Michael showed up the following morning, a man who claimed to work for the new owners offered him $2,800 if he left the building by the end of February, and $2,240 if he left by the end of March.

Although Michael had no place to go, he signed a deal to be out by February 28 “because I need the money,” he told NOW in an interview. He said he missed the first deadline to vacate his unit but in early March secured a spot in a transitional housing facility just outside downtown east. At the time of our interview, however, Michael said he had not received any cash.

According to another tenant, who gave her name as Deborah Russell, as of Thursday, March 12, about 10 tenants were still living in the rooming house.

She says she also accepted a buyout but has been unable to find a place that accepts pets. She says she’s been told she has four months to move out, and although she’s put her name on a housing waiting list, she doesn’t know whether she’ll have a new home in time.

“I signed the papers not realizing what I was signing,” she says, tears welling up in her eyes. “I’m just trying to find a place to live for me and my cat. I don’t know where I stand.”

The owners of the property, Dundas Residences Inc., declined to be interviewed for this story. But in an email statement, spokesperson Danny Roth writes that Dundas has worked with the city and community to ensure “full compliance with city policies and guidelines. We continue to believe that our approach has been fair and considerate and we look forward to being a positive part of this community long into the future,” Roth writes.

Scott Byers, a staff lawyer at Neighbourhood Legal Services, which has stepped in to help the tenants, says there’s nothing improper about a landlord offering tenants a buyout. However, tenants are under no obligation to accept a deal, he adds. If they don’t accept, under provincial law they’re entitled to 120 days’ notice to move out.

He adds that in this case, “it seems [tenants] weren’t aware they had the right to decline the offers.”

Byers is concerned about tenants who may have mental health or addiction issues and take a buyout even if they have no other place to live. “We worry about where they’ll end up when that small pot of money runs out.”

Second-term area Councillor Kristyn Wong-Tam must deal with many issues like those at 235 Jarvis. She’s faced with the unenviable task of balancing the competing interests of poorer residents with those of powerful developers and the many locals who feel the area is crime-ridden and needs cleaning up.

She says the city didn’t know there was a rooming house on the site when the developers submitted their application to build a condo, and there is no bylaw stipulating that rooming house units that are demolished must be replaced.

Wong-Tam points out that many of the tenants have mental and physical health problems and need to be in supportive housing. Since becoming aware of the issues facing tenants, she says, the city has been working with Woodgreen, an affordable housing agency, to help find appropriate accommodations.

City staff are also negotiating with the developers to ensure that those who are displaced receive compensation packages “above and beyond” what’s mandated by provincial law.

Wong-Tam has no doubt that right now the downtown east is “not a sustainable and safe neighbourhood.” Residents, particularly women, feel uncomfortable walking at night. There’s no bank, grocery store or pharmacy in the area. “We are looking for those types of partners,” she says.

She sees the new developments as an opportunity to secure services and housing for the marginalized and create a healthy mixed-income community. To that end, she’s negotiated with developers to build 14 affordable-ownership condos for artists in new buildings, and to provide a cultural centre and ground-floor retail that she says will employ people from the neighbourhood. She’s also asking builders to buy up nearby properties to create new rooming houses that could be operated by social service providers.

Says Wong-Tam: “The last thing we are trying to do as a city is gentrify. We’re trying to work with the local stakeholders to make this neighbourhood safe, affordable and inclusive for all.”

Nick Culverwell, president of the Garden District Residents Association, agrees the goal should not be “tossing out all the homeless people or some ridiculous thing like that.” While he was originally taken aback by the size of some of the skyscrapers being proposed for the area, he hopes many of the new condo owners will rent to Ryerson University students and that that new demographic will spur much-needed commercial development in the area.

He says he’s cautiously optimistic that the current development trend “is contributing to a positive sense of balance.”

Key to achieving that balance is a proposed amendment to the city’s Official Plan, which Wong-Tam helped draft, requiring that 10 per cent of all new units built in the downtown east be affordable housing.

The amendment, which would also allow tall buildings on Jarvis and mid-rises on Dundas, goes to council for approval at the end of the month. But developers have already signalled that they will fight it at the Ontario Municipal Board, which has a reputation for ignoring local councillors’ concerns.

On a late winter afternoon, a small crowd is drinking in Mounties Dining Lounge at Dundas and Mutual. A handwritten sign in the window advertises cheap rooms for rent upstairs.

O’Neil Dufresne steps out of the bar and into the shadow of the 42-storey tower next door and lights a cigarette. He says he’s been drinking at Mounties since he came to Toronto from Quebec in the 1960s. The 70-year-old has since moved to the city’s western lakeshore, but he still stops at the bar whenever he’s downtown.

He thinks Mounties will probably be gone in three or four years. All the regulars say the owner is waiting to sell. Dufresne says he’ll miss it.

“There’s always somebody that you will know [here]… on his last leg, like me,” he says, laughing.

Whatever the plans for new affordable housing, for Heroux even the loss of a place like Mounties tears a hole in the fabric of the neighbourhood. Poor people don’t just deserve housing they can afford, he argues, but places they can afford to get together and socialize, too.

“If you’re going to fix this place up,” he says, gesturing widely, “you have to ask for who?”