Kenk's wrist slap, Miller vs. Globe and Mail, and having a gin and titonic. 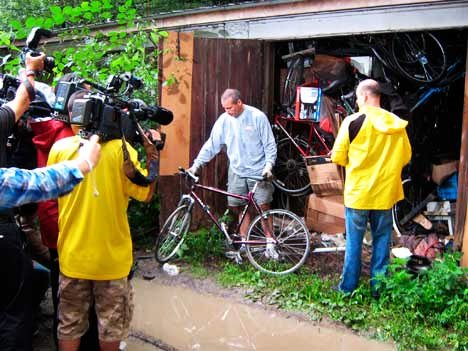 A cop photo op that netted thousands of bikes and only a handful of limp charges for Igor Kenk.

Remember the roughly 3,000 bikes police seized from Igor Kenk over a year ago? Well, he was guilty of possessing ten stolen ones (and some drugs). The near-legendary bike thief possessor of stolen bikes, whose arrest saw a 500 per cent drop in thefts, will be out of jail in four months.

Mayor Miller’s embarrassment at Canada’s pathetic Copenhagen showing, was targeted by a Globe and Mail editorial. He’s since responded, calling the attempt to discredit Toronto’s greening as “flat out wrong” and “woefully out of touch”.

While you’re on the mayor’s YouTube page, check out this crazy white bike that builds power as you pedal and then helps you motor along. Too bad white bikes have a whole other reputation in Toronto.

How irrelevant is Billboard? Why not start and finish with them naming Nickelback the top duo/group of the decade.

Finally, if you’re planning on sinking your face into a lowball filled with icy vodka, keep the tasteless theme going with the cleverly named Gin and Titonic ice cube tray. One disgusted historian is quoted as asking, “How long will it be before this firm makes ice cubes of the Twin Towers?” My bet’s on 2097.[rssbreak]