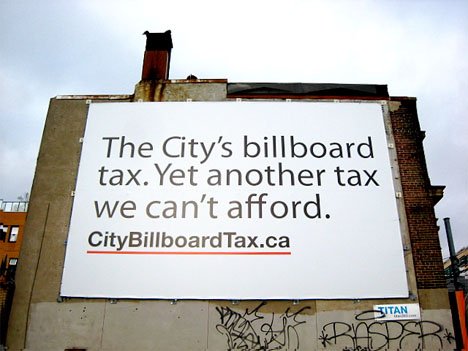 We could see Toronto’s billboard tally drop by half over the next 25 years, suggests illegalsigns.ca – one of the groups involved in yesterday’s new sign by-law and tax. The city should see an extra $10 mil in funds and a reduction of fugly signs, especially in the ‘burbs thanks to the 29-12 vote.

It’s day two of COP15, and the BBC has released a poll showing concern about climate change around the world. We already know Harper has successfully taken us to victory as fossils of the day, but it’s good to know we’re the second keenest (behind the UK) to take a leadership role.

Virgin Galactic, for whatever reason, chose to pull back the curtain on their novelty space ship in the midst of a critical climate summit. Sure it’s got a hybrid rocket – but it’s a space ship for rich people to do zero gravity back flips as the Earth boils below.

Where else but in Russia would you expect researchers to gleefully announce the development of a powdered form of vodka that can be put into pill form. The developers have said they’re also capable of turning any drink into a pill including whiskey, cognac, wine and beer.

Finally, what happens when you want a small-scale illustration for humanity’s dangerous pursuit of fossil fuels? Check out Centralia, PA where an underground coal fire has been burning since 1962 and isn’t expected to stop for at least another 100 years.[rssbreak]