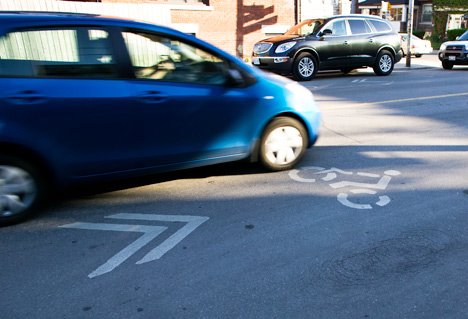 The pedestrian death toll wasn’t raised over the weekend — no doubt connected to the police blitz, right? Well, two people did get hit, but didn’t die. Of course the officer in the story made sure to lay blame on a pedestrian in the right for not being more aware of bad driving around her.

I really want to keep hearing the word “blitz” attached to every policing action. A good new candidate for a lighting war: starting today police are supposed to start enforcing the hands-free cell law. We’ll see if cops take a balanced approach to nailing auto offenders the way they pumped out jaywalking tickets. Just for perspective, TO cops charged a whopping seven people with distracted driving in the three month grace phase leading to today.

As for the TTC, expensive technology that was supposed to be environmentally friendly and prevent spewing diesel into the atmosphere from hundreds of idling buses, isn’t working. So how’s the PR blitz going, TTC?

If you’re free between 3 and 6 pm, there’s a Hope for Haiti march going from City Hall to Queen’s Park with keynotes from Haitian Honorary Consul, Dr. Eric Pierre and President of the Ontario Black History Society, Dr. Rosemary Sadlier.

Those constantly complaining about not having input on bike lanes, might want to swing by Metro Hall at 6:30 pm today (rm 308-309). Tell the city where to paint lanes, and where to stick sharrows.[rssbreak]