McGuinty meddling, how to lost $1.4 mil, and the grizzlies are coming 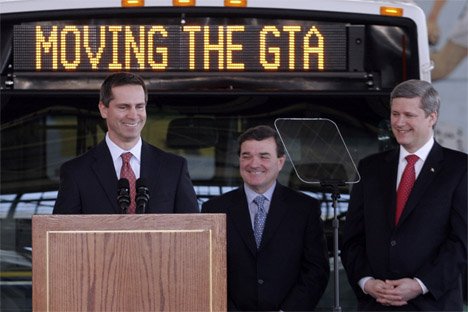 Dalton McGuinty is making a big mistake. He’s messing in business that simply isn’t his by sticking his unwelcome face in Toronto’s TTC essential service business. Worse, he’s doing it as we gear up for an election. Is McGuinty’s next step telling us we have to elect his best bud George?

Bad ideas just swirl around the TTC. While it was likely a less-than-serious move, the TTC’s customer service panel invited Twits to pitch themselves as potential board members in 140 characters or less.

And remember the search for $20 million in gold bars that went missing at the Canadian Mint? Well, we know it was actually a bookkeeping error, but the loss did cost us a very real $1.4 million ultimately blown on finding $20 mil nobody lost. Oy.

Don’t like the Olympics? CBC? IOC/Vanoc? Canadian flags? Well, this item will make you happy. The CBC was handing out free flags but the gesture was killed by the IOC/Vanoc as the flags had a CBC logo on them. They said it was too corporate. Hah!! The most corporate-friendly entity in the world says this? Oh right, it wasn’t McCTV.

Finally, get your fill of polar bears because the grizzlies are coming. Turns out the brown beasts are encroaching on polar bear territory. Just another environmental change bellwether?[rssbreak]