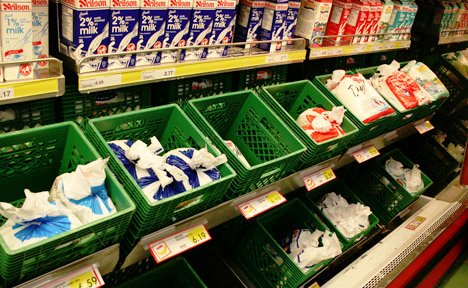 A YouTube video of Ontario’s milk bags – which are pretty gross – has plenty of people commenting on the weird sacs. The Star wrote a whole story on it without mentioning that we all have the much better option (environmental and taste) of glass, and just assumed DuPont’s milk bag scam was innovation in the face of the “hassle” of glass.

Sticking with packaging, ketchup packets are finally getting a rethink of its own little messy bag that’s been around since 1968. The new version allows diners to dip and squeeze.

Liberal Glen Murray has won the Toronto Centre by-election, but not before street nurse and second-place finisher Cathy Crowe managed to get $15 mil from the province to save the Grace Hospital.

The National Post has a timeline of TTC coffee break where the writer stakes out an idling bus. This time around the driver responded by taking his own cell phone pictures. No indication of whether the TTC is doing something about this driver.

If this driver or any other bad seed in the system gets canned, they should totally go the way of Sun Microsystems’ CEO and tweet their departure with a haiku.[rssbreak]