Pedestrians targeted by blitz, McNally Books back on its feet and heritage status for Maclean House 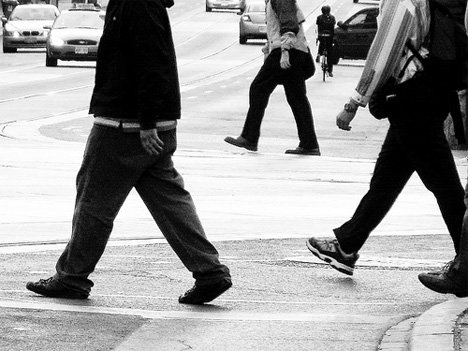 Police are launching a pedestrian safety blitz. Note, no driver safety blitz. This just as some news outlets pander to the car-driving target market by making pedestrians look like careless wandering fools. The fact is jaywalking isn’t illegal if you know what it means.

As people foam over Apple’s magic tablet, here’s a good story of one guy, his paperless lifestyle and the pitfalls of the paperless trail we’ll soon be leaving. And don’t forget the book piracy!

McNally Robinson, which had to close their basically new location in Don Mills, has successfully emerged from bankruptcy protection.

The jerk developer trying to sneak in the destruction of 7 Austin Terrace (Maclean House) has another problem: The site’s officially been designated a heritage property, largely thanks to local councillor Joe Mihevc. There’s still some appeal time, but hope exists for the historic home Maclean’s Magazine’s founder.

Finally, to break the serious tone of today’s list, here are some testicle related facts from Harper’s – which recently pulled the ballsy move of firing their editor.[rssbreak]