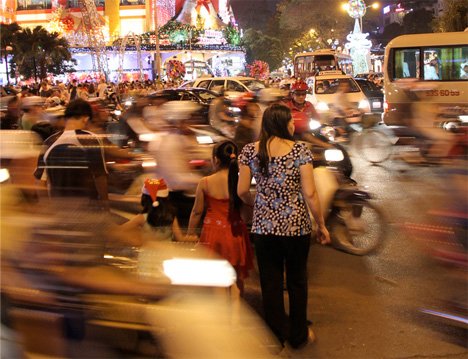 Caught up in blitz, the police crackdown on rogue pedestrians – like all showboating – does more for optics than for solving a complex road-sharing problem.

Meanwhile this alternative transit friendly city is busy collecting fines off people who cross on flashing orange hands, which is illegal. Sure 20 seconds is plenty of time to cross Spadina, but now you’ve got to have a car to do it.

Here’s an explanation of how traffic lights work. Note the absence of a method for cyclists to get a green at smaller intersections where you need the weight of a car to trigger a light change.

All this crossroad madness probably means it’s a bad time to roll out the case for rolling bike stops. Maybe next year.

Well, at least we’re not trying to deal with jaywalking in Saigon.

Chances are you’ve come across “A People’s History of the United States” at some point. Well, the alt-historian behind it, Howard Zinn, has died.

Finally, PETA’s a tit again. That’s a deliberate typo, because their latest ad is a stripping State of the Union undress. If you want the good parts of the real Address, go here.[rssbreak]