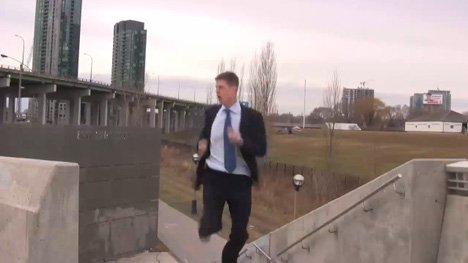 Toronto’s worst kept mayoral secret – that Adam Giambrone is running – is official. And by the looks of Giambrone’s “I’m Ready” YouTube video, he’s not going to pull anything in this run.

Wondering where Canada stands on Haiti donations? There’s an awesome graphic comparing countries here. Click on the graphic to see that we’re the most giving, are only surpassed by the US in total donations, and we only delivered 51% of our pledged money to the Tsunami.

Hey, didn’t the government promise to match donations to Haiti? Hope it’s not 50% this time too.

Sometimes when my friends pass out at parties I put stuff on their heads and we all laugh. It’s kind of the less scary version of medical students giving unannounced gynecological exams to anesthetized surgery patients in Canadian hospitals.

SexTV is done. It’s going to be rebranded because, as a spokesperson said, “SexTV had no audience.” Everyone’s busy sexting.[rssbreak]