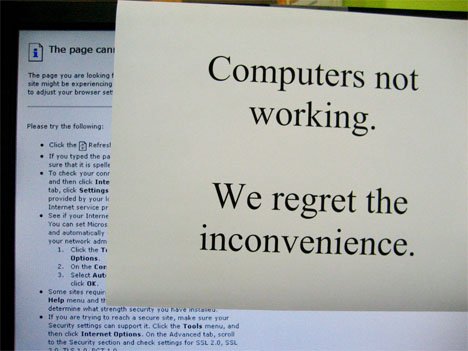 It was a matter of decimals that kept a TTC driver from getting more than a three-day driving suspension. Why? Because she was allegedly drunk last Friday. Passengers called police after noticing erratic driving, and her breathalyzer test was between 0.05-0.08 – just below the impaired criminal impairment line. Still, that three-day suspension is from the police, and the TTC are doing their own suspending and investigating.

Five years along and absolutely nothing, NOTHING, will be done about the completely rotten loss of $60 mil in the MFP Financial Services computer contract. So, you can add the cost of a five-year OPP investigation to the disgusting loss of our money.

Continuing this losing theme, Industry Canada wants our libraries, community centres, hospitals, drop-in centres and seniors’ residences to lose funding. This battle of the Conservatives’ War on Knowledge involves cutting funding used to provide free internet access. The 16-year-old program is critical for those 20 per cent of people who can’t afford to their own computers.

Helena Guergis is an embarrassment. After insulting all of “hell hole” PEI in an airport tantrum, she decided the right thing to do was threaten to sue Air Canada. She can’t even get sympathy, rightly so, from ex-Con leader Deb Grey. The Cons would be nuts not to pull Guergis from her status of women post.

It’s not official, but in a boggling display of his alliteration B-game, Royson James is suggesting “burly bombastic bulldog” and “borderline bully” Rob Ford might be the “barbarian” taking a stab at being Mayor.

Finally, Mr Trololo, you know – that Russian behind a wordless singing meme that even had Oscar-winner Christoph Waltz doing parodies, has been found and interviewed by Russian journalists. Some in Russia are suggesting he be in the next Eurovision.[rssbreak]