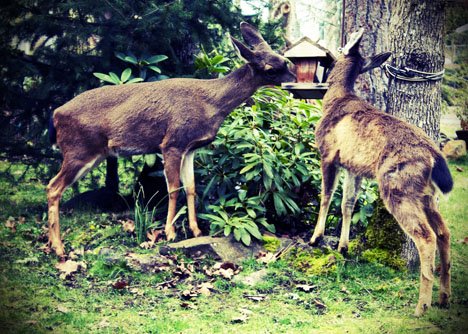 It’s a complete nightmare scenario: doctors assume you’re in a coma for 23 years, but you’re really not. Instead, your reasoning, conscious mind is trapped in your useless body. That happened in Belgium, and it’s assumed plenty more people are imprisoned in the same way.

As we get closer to Copenhagen’s climate summit, it’s fair to expect more protests, like this sit-in at Environment Minister Jim Prentice’s office.

We’re still waiting for Obama to be clear about whether he plans on going. If he says “yes” Harper will go. If he says “no”, there’s probably a lacrosse sweater he can hide his face behind all through December.

Al Gore’s even in town today, speaking at the Allstream Centre, Exhibition Place and donating proceeds to the David Suzuki Foundation.

A deer! A DEER! Does anyone else find it depressing that you get news coverage here for the spotting what’s so common everywhere else in the country: a single dear. Single tear.

Finally, Thanksgiving’s (in this case, the US one) always a great excuse to get smashed, but an Irish pub in New York City is making it too easy. They’re infusing turkeys with 100-proof vodka and using “a base made with peach, raspberry, cherry and apple vodka and are served with vodka laced gravy.” It’s going to get you wasted, and the bar knows it – they’re including cab rides home with the cost of the dinner.[rssbreak]