Dolphin>deer, salt in our eyes, and barfing up a new species. 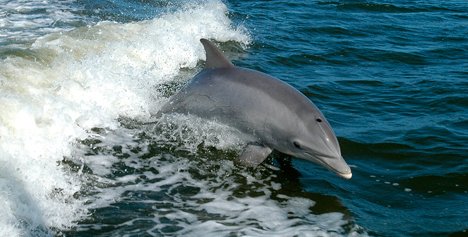 In further evidence that dolphins are smarter than deer, one wily marine mammal decided to head toward NYC and just as police went after it – it escaped unfazed, untased, and heading north.

Food makers are adding salt to Canadians’ health wounds. It’s obvious we’re eating too much salt and it’s killing us. The government wants to lower the consumption to a level where we’re not at risk and guess what, companies like Kellogg don’t. In one hilarious response to the feds, Kellogg says people are “very sensitive to formulation changes”, as illustrated by All Bran, in which the Canuck version has nearly four times the sodium of the US version.

If that makes you sick to your stomach, maybe you’ll discover a new species – like this little guy, a chameleon that was barfed up by a snake in Tanzania.

And another rare sight that might make you hurl a new species, octogenarian playboy Hugh Hefner was having a foursome and nearly choked to death on a Ben Wa ball sex toy.

Those of you into neologisms will be happy to know your dreams of a successful COP15 Copenhagen summit can now simply be called Hopenhagen. The group behind the name is putting out vids leading up to the meet. The first one’s here.

Finally, this video outside a Sarah Palin book launch recalls the Talking to Americans interviews conducted by Rick Mercer, but leaves you more afraid than amused.[rssbreak]