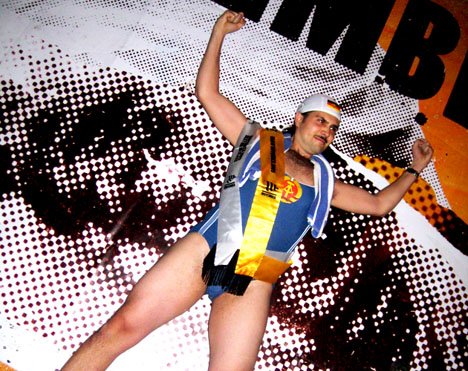 Movember, the moustache growing fundraiser for prostate cancer, is wrapping up in a few days. So if you have a friend with a creepy ‘mo’, or one that happens to look like Man of Movember 2009, Adrian Pruchnicky – crowned last night and pictured above – now’s the time to donate.

City Council debates the billboard issue December 1, and to counter the 80-plus closed door meeting lobbyists have had with city hall, illegalsigns.ca is making custom billboard lobbyist sanitizer (B.S. for short). The group will be handing the bottles out to city staff coming in contact with billboard lobbyists.

But not everyone’s against illegal advertising. Rosie DiManno fights for that dreadful Maple Leaf franchise’s PR wing today, saying spray-painted logos on our sidewalks are great. It’s unclear whether she’s encouraging all kinds of graffiti on public property, but definitely the kind that sports-branded and created by big corporations.

Those patiently waiting for Al Jazeera to be green-lit for Canadian TV will be pleased to know it happened yesterday. If you want a summary of arguments against the channel and the complete CRTC decision, it’s here.

Finally, sometimes it’s nice to see the truth in a graphic. In this case, the Guardian has taken statistics on drug deaths and paired them with the frequency of media reports tied to those deaths. Surprise, surprise, pot deaths are the media frenzy champs with 19 deaths creating 92 stories.[rssbreak]