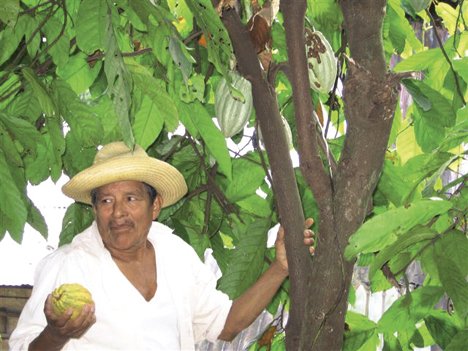 Mexico – After pushing a 1992 Mazda up dirt trails for a few hours, I get a taste of the bittersweet romantic adventure behind the sweet treat recently branded to symbolize Valentine’s Day.

I’m getting the full experience of the authentic cacao, a bitter medicinal drink loaded with antioxidants, polyphenols and other healing micronutrients, courtesy of Michael Sacco of ChocoSol, a T.O.-?based fair trade company partnering with indigenous people in Oaxaca.

We’ve made it to San Felipe de Leon, an unmapped village of 1,100, eight hours from the state capital of Oaxaca. Like other indigenous areas of the globe, the terrain here is mountainous and rainforest-?covered. Also like the others, its people have been excluded from productive farmland closest to mass markets, but also insulated from dominant groups by the benign neglect of isolation and the absence of a resource base that had any value – at least until recent times.

Life in San Felipe is not totally different from what it was 1,000 years ago. Most of the women speak only the indigenous language, most work hours are spent in a cashless economy, and all land still belongs to the village, which grants individuals and families secure tenancy.

Our car sputters across a stream, and soon we arrive at the home of Don Max, the elected leader, a passionate environmentalist and co-?op activist. His residence is a cement bungalow, with chickens on one side, orange and lemon trees on the other, a rushing mountain stream for a backyard and dirt-?floored garage for our sleeping quarters.

Up the lane nearby, he shows us the new co-?op building provided by the government. The hope is that rising global demand for genuine cacao from its place of origin will supplement subsistence living with a few hundred dollars a year for each family. Villagers tend the cacao trees intercropped in the forest while making their daily trek through the mountains to care for cornfields and gather firewood to cook their corn tortillas.

Don Max sends us across a little bridge to the home of village elder Don Rosendo. Seeing Sacco – known universally in these parts as “Chivo,” (the goat), as much for his uncontrollable enthusiasm as for his impish goatee – Don Rosendo grabs his machete, clambers barefoot up a tree and hacks down some cacao pods.

“I’m 76,” he says in Spanish. “How old are you – 73?” I murmur something about mountain life making people look younger, and before long we’re clowning around, wearing the squash shells they use for dishes as skullcaps. We’re now officially welcome in the village and can start work.

After waking us at 5:30 to grind corn and make tortillas with his wife, Don Max leads us up a mountain trail to his hectare of farmland and hectare of forest.

We wend our way through what seems thick and wild jungle but is in fact a well-?tended forest garden featuring heart of palm, coffee, red and white chocolate, dangling vanilla, yucca and countless berries and leaves that have no name in English.

They’re all growing under the canopy of broadleaf trees that protect the soil on the steep slopes from erosion. Many of these plants take a decade to fruit but then last 100 years, one reason why tree-?based food systems are often called “permaculture.”

More domesticated is the “milpa,” on a hectare of sloped land Don Max has hacked out of the forest with his machete without disturbing the fragile topsoil. The milpa features the “three sisters” of ancient Mexican farming: corn, which requires lots of nitrogen, beans growing up the corn stalks, which replenish the nitrogen, and squash, whose vines and leaves keep weeds from growing.

Less well-?known is that milpa agriculture includes hundreds of “wild” greens that balance a diet otherwise overloaded with carbs and short on vitamins and minerals. The full milpa can only be grown organically, since sprays that protect corn kill off the wild greens – one reason why successful peasant farming increasingly features organic methods.

It’s the dream of Don Max and his friends that fairly traded, small-?scale exports can provide them with cash to school their children and buy a few treats and labour-?saving devices. (Electric corn grinders would be high on most women’s lists.)

The goal is to sustain a way of life that honours indigenous traditions and that – rare on the northern half of the planet – actually leaves the world with more carbon and life than the economy takes out. Thanks to our infatuation with ethical cacao, that vision is not hopelessly romantic.