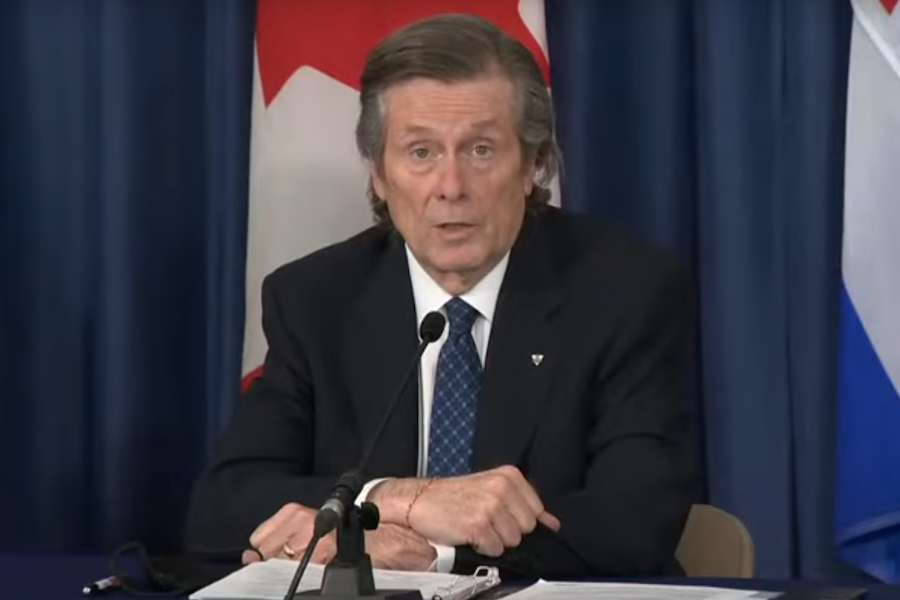 In a video statement posted on Twitter, the Ottawa-based lawyer and housing advocate said that the city’s decision to send dozens of police and private security officers to remove tents and homemade structures near Liberty Village “is obviously not a human rights approach to homeless encampments” and urged city officials to adopt a strategy “in keeping with the city’s own housing strategy that embraces human rights and uses resources efficiently to ensure those living in homelessness have a safe place that meets their needs to live.

“People living in encampments are not trespassers, nor are most of them criminals. They are rights holders and they are entitled to be treated with dignity and respect,” said Farha, who is the former UN Special Rapporteur on the Right to Housing and global director of housing initiative The Shift.

Today’s displacement of homeless ppl living in Lamport park by @TorontoPolice and @cityoftoronto security personnel, with bulldozers in the waiting, is not cool. Not cool at all. @Make_TheShift #humanrights #toronto #housingjustice pic.twitter.com/1wfwDjst6w

On Wednesday morning, police arrived on bikes and horses alongside heavy machinery and staff in HAZMAT suits to clear tents and shelters near King and Dufferin. Last week, the city had posted trespass notices warning that residents could face fines of up to $10,000 if convicted of violating the province’s Trespass to Property Act.

Toronto has been clearing other encampments over the past week. Officials say the encampments violate city bylaws and pose a health and safety risk. The city has also been offering encampment residents spots in shelters and shelter hotels.

However, housing advocates and some people living outside have countered that many fear catching COVID-19 in the shelter system and that hotel shelters mean living under curfews and other restrictive rules.

Videos circulating on social media today showed scenes of police clashing with supporters of encampment residents. One video shows Toronto police officers hauling one person into a police van. Another shows people from the crowd surrounding the remaining tents and shelters with their bicycles.

Constable Laura Brabant, a Toronto Police spokesperson, said in a statement that officers were on the scene “as a last resort” to support city staff. Two people were given trespass tickets, one person was arrested for assaulting an officer and three officers were injured, including one who was treated for undisclosed injuries at hospital, Brabant said.

None of the people charged were residents of the encampment, she added.

The Encampment Support Network (ESN), a group of volunteers supporting encampment residents, tweeted police held one man at 14 Division “who was defending his home.” He was later released, ESN tweeted. Another tweet from the scene said the person detained by officers was injured.

It was awesome to see the community use this protective bike line instead of the cops. https://t.co/R2eWlw0Jw2 pic.twitter.com/4l9XSMkJcq

In an email statement, city spokesperson Brad Ross said Streets To Homes staff have visited the Lamport site 107 times since January to offer “safe, inside space and services.” He said that there was a “very serious fire and explosion of propane tanks in the encampment” at Lamport several months ago.

“Camping or erecting structures in parks and rights-of-way are not permitted and public space must be safe and accessible to all residents,” Ross said. “The City is enforcing the trespass notice posted at Lamport last week. All residents there are being offered safe, indoor space at a shelter or hotel program where people are provided with the supports noted.”

During a city hall press conference on Wednesday afternoon, Mayor John Tory said there were about 15 people living in the Lamport encampment when city workers arrived and some had accepted offers of “indoor housing.”

“We know encampments are a violation of the right to housing. However, the solution to this violation is the provision of safe and adequate housing and not a cycle of coerced eviction,” Estair Van Wagner, an associate professor at York University’s Osgoode Hall Law School, said during a virtual press conference organized by the Toronto Drop-In Network on May 18. “The forced removal of tents are evictions under international law no matter what the city chooses to call them.

“Unfortunately, the city is choosing to emphasize its powers as a property owner over these obligations to the people of Toronto,” she continued. “In our view this position leaves the city open to a legal challenge on multiple grounds.”

In her video, Farha called the encampment situation in Toronto “double jeopardy.”

“People are living in homelessness – that, in and of itself, is in violation of the right to housing. And now the city is penalizing them for trying to eke out an existence and survive.”