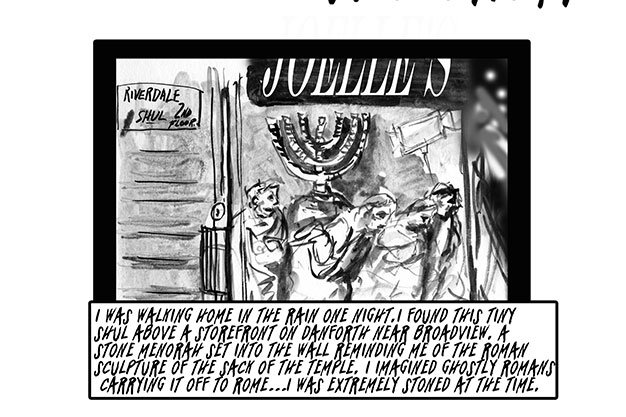 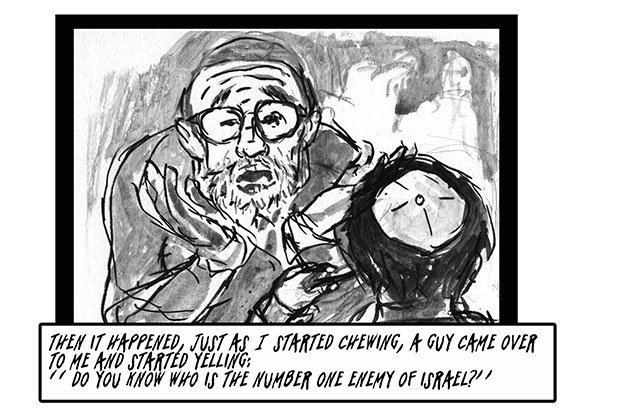 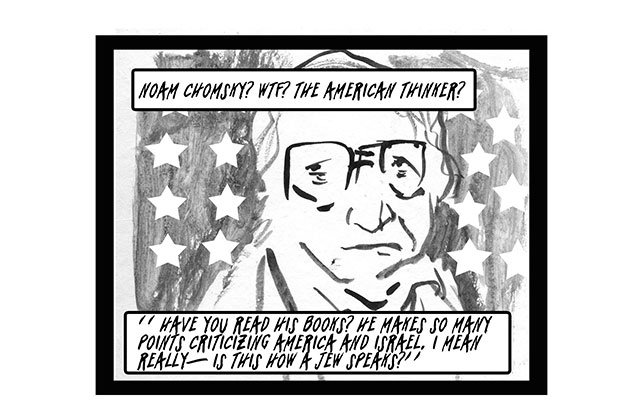 The charged climate following the Charlie Hebdo shootings landed at Jet Fuel Coffee shop in Cabbagetown, when a man attempted to run off with Jewish-themed art at an opening last Saturday. The show, by painter Eric Farache, contains panels of a graphic novel in progress entitled ‘The Jew Funnies,’ documenting his experiences as a young Jewish art student in downtown Toronto.

In the book, Farache hopes to straddle the many ambiguities and contradictions that confront contemporary Jews like himself. This did not prevent the offended party from claiming anti-semitism after he physically removed two offending cartoons from the wall of the coffee shop and leaving, attempting to drive off with the works in his van. In the subsequent contentious conversations that followed, the art was reluctantly returned.

In the aftermath, it became clear that the perpetrator had not actually read the cartoons closely, and was unaware that Farache is himself a practicing Jew.

Farache is still puzzled by the incident. The supposedly offensive cartoon recounts a story of how he wandered into a Shul as a young man. Staying for dinner after the service, he is approached by older man who starts lecturing him on the fact that Noam Chomsky is the number one enemy of Israel. Farache believes that it could have been the work’s title, The Enemy of Israel, or the faux Hebraic font of the title, that triggered the bizarre attempt at censorship.

Told in a loose, impressionistic sketchbook style, The Jew Funnies are less about finger pointing and more about trying to remain faithful to one’s cultural and religious heritage in a community that is often divisive, fragmented, and carries extreme views on every point of the political spectrum, Farache says.

Farache is Sephardic Orthodox, a lineage that is not robustly represented in Toronto’s Jewish community.

“Being a Sephardic Orthodox jew makes you a bit of an outsider among outsiders within the Jewish community here in Toronto,” Farache says. “The cartoon is something which talks about how difficult it is to have a discussion. Maybe all Jews in diaspora have this conflicted relationship to Israel. I think the important thing for me is to not be blankly going along with the way any society operates.”

It appears that Farache has hit the nerve he was looking for. Thankfully, it was only attempted theft, and nothing more.