“Since we launched our service about nine months ago, we’ve learned a great deal,” said Kathy Haley, beginning the most awkward presentation of her life. The president of the Union Pearson Express (UPX) had been called to Tuesday’s special meeting of the Metrolinx board to answer for her project’s failure to attract riders.

Earlier in the day, the province announced that fares on the underused line would finally be coming down. Starting March 9, one-way adult tickets between Union Station and Pearson Airport will dive from $27.50 to $12, or from $19 to $9 if you pay with a Presto card. And if you get on or off at one of the intermediate stops (Bloor or Weston) you’ll essentially be paying GO rates — roughly $5-6 for the distance. (Those riding prior to March 9 will be given a two-for-one discount on current prices.)

It is not, however, technically up to the province to determine UPX fares. Officially, it is the responsibility of the Metrolinx board. And so the 13 appointees, plus the agency’s president and CEO, were summoned to the emergency meeting on Tuesday to rubber-stamp this new plan.

But before they did, they heard from and asked questions of Haley, the executive in charge of a line that’s averaged fewer daily riders than many, if not most, TTC bus routes.

She cited four primary “impediments” to ridership: low awareness of the service deeply entrenched travel habits that are difficult to change people having trouble locating the stations and finally, grudgingly, “perceptions about our price.”

None of this was new or surprising. But from the meeting and the media availability that followed, we did learn some spectacular things about the way Metrolinx thinks:

• It’s not that the price was too high but that the public was too clueless to get that it wasn’t. Haley: “I think there’s a lack of awareness about the price. We did find out that people were not aware of our Presto price discounts, of our concession discounts. There just seemed to be, in all of the research, there seemed to be a lack of awareness about what the price was. For the business community and the people that use it, they were very aware of it. They did not view it as expensive. But some of the local public did. And people that weren’t aware of the service had perceptions from other sources, for some reason, that it was higher than what it really was.”

• Guys, it turns out that getting people to stop driving and take transit is really, really hard. Haley, who spent 17 years working for Esso but has no previous experience with mass transportation: “I wouldn’t have forecast how deeply entrenched those behaviours were … in getting people out of their cars. A lot of the analysis we had done was in Europe and Asia, where trains are loved, and I even have some of our customers say, ‘I’ll definitely take the train in London, but I wouldn’t think about taking it in Toronto.’ So for some reason, there is a North American appreciation and love for the car.”

• Have you heard of this thing called Uber? Haley, on competition from Uber, which launched in Toronto in 2012 and got Pearson pickup privileges in 2014: “I mean, there’s some indication that some of the market conditions have changed since we launched, and we’re in a market that we wouldn’t have predicted.” She later elaborated, adding that they hadn’t “anticipated” ride-sharing services when they did their forecasting.

• Building a tunnel through a single city block is a five-year undertaking. Haley revealed that the long-promised connection between the TTC’s Dundas West station and the GO/UPX’s Bloor station 160 metres to the east will “probably take about five years” to be completed. (Last year, she said it would be done by 2017.) Metrolinx president and CEO Bruce McCuaig explained the the project has been complicated by the need for expropriation: “So there are private property owners between ourselves and the Dundas West subway station, and we’re in a process of having conversations and pursuing an expropriation, ultimately, of a subsurface corridor that would then allow us to build the tunnel connection.” Former mayor David Miller called this “pathetic.”

• You mean there are people who don’t have Presto cards? Metrolinx chair Robert Prichard strongly rejected the premise of a reporter’s question that referred to the new UPX fare as being $12: “It’s $9. And if you wanna pay cash, you pay an extra $3 paying cash, but by the end of the year all Torontonians who use transit will have Presto cards, as TTC is fully Presto-accessible, and so we’re assuming the vast majority of people will use their Presto card.” Of the current fares, he said: “It was quite clear there was a lot of confusion about what the price was.…We always thought the price was $19 lots of people thought the price was $27.50. That’s a big debate.”

How could they have ever gotten that impression? 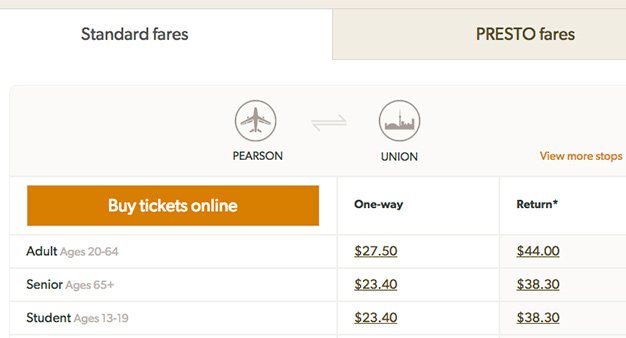