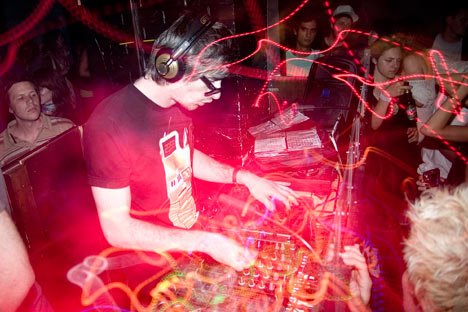 Kavinsky at one of Queen W.'s many bars

I like bars. I like going to them, drinking in them. They’re fun. But Queen St. W. is getting a little ridiculous. Ten bars have launched or been re-launched between Gladstone and Dovercourt since 2004.

That’s great if you stop in the neighbourhood to dance around, vomit in a shrubbery and back in the ‘burbs by 4 am, but it sucks if you’re trying to sleep or do anything other than drink at night.

The good news for residents is the Queen/Beaconsfield Residents Association – a group of people who actually like bars – wants some degree of equilibrium in the mix.

They want the city to wake up to the idea that over-saturation, excessive noise, blinkered storefront diversity and drunken hordes will drive people out of their homes and convert the area into a theme park.

Violence isn’t fun either. The area isn’t as bad as the Entertainment District (yet), but why revisit those mistakes?

They suggest Toronto look to New York for a solution. There, you can only have more than three bars in a 500 foot area if the community decides it’s in the public interest. How novel – let people with bedroom windows on 3 am patio scenes have a say.

The 500 Foot Rule was enacted in 1993 when residents in New York had the same shitty experience as those living in West Queen West. Guess what, people still have fun in New York.

There’s more coming on this story in NOW’s print edition, so, read that later to get the big picture.