Food system belches a third of carbon gases, so put it in the climate pact 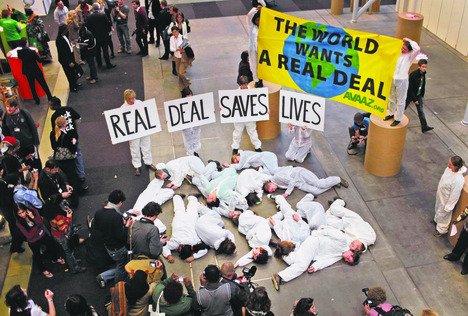 Money talks, power whispers – it’s a norm of politics that could very well be challenged at the Copenhagen conference, which will decide if world leaders are ready to adopt a treaty in time to prevent irreversible climate pollution.[rssbreak]

In the years since the 1997 Kyoto Protocol, most statements, including those of the Intergovernmental Panel on Climate Change, have relegated food and agriculture to the lonely margins of the debates on the causes and cures of global warming.

But as the conference opens, several groups are arriving to put food on the front burner, where it belongs. The Minneapolis-based Institute for Agriculture and Trade Policy is sending a staff delegation. The Pew Center on Global Climate Change is pushing measures to store 100 million metric tonnes of carbon in farming soils.

The Food and Agriculture Organization is entering the fray as if it were a non-governmental organization instead of a sidelined United Nations agency, flogging its publication on how climate protection moves can add to the income of impoverished farmers. And as we go to press, the militant Via Campesina has taken to the streets of Copenhagen pushing for the recognition of small peasant farms as carbon emission slayers.

There are many reasons why these messages should receive a serious hearing, no matter what doesn’t happen at Copenhagen. Most obvious is the reality that food and ag systems are responsible for about a third of all global warming gases.

As with most things related to food, charts and stats tend to invisible-ize many workings of the system. Even the Pew Center brochure reproduces the standard pie chart showing transportation as the cause of 26 per cent of emissions, power plants 32 and industry burning up 23, while agriculture is dwarfed at 7.

This lowly percentage doesn’t capture the full energy-sucking round of food processing, transportation, refrigeration, packaging and food scrap disposal – all of which get amalgamated in other categories.

But one thing makes food dramatically different from the electrical power, transportation and industrial sectors: the solutions can be implemented by millions of people taking a personal and active role. And as tough as that is, it’s a picnic compared to pressuring governments to clamp down on the car, highway, steel, coal and electricity industries.

So as the Copenhagen meet continues this week, remind yourself that you have available and close at hand a source of change not reliant on corporate or government say-so.

Think of food waste alone. An amazing 50 per cent of edibles are, after absorbing huge stores of energy in production, then hauled to landfill sites where they will rot to produce methane, which is over 20 times more potent than carbon dioxide as a global warming gas.

Almost all those scraps, enough to put us well on our way to meeting the stiffest enviro targets, can be reduced by responsible shopping, food prep or composting. Just composting the food thrown out in the U.S., says E Magazine, would be the equivalent of taking 6 million cars off the road.

Another reason to highlight food this week is that funding directed to climate-protecting food production is also the way to support the globe’s poorest. Diverting tax revenues from first world carbon emissions to fund carbon-storing practices on small plots (the world has 500 million of them farmed by the poor) would solve two grievous problems at once.

Once the spotlight is on food, a long list of people-powered initiatives can do what no government or corporation can – which may be one of the deep reasons why food has been kept off the agenda so far.