Review: Venom: Let There Be Carnage is… fine, actually?

The sequel to the 2018 Marvel spinoff might not be good, exactly, but everyone's having a lot more fun this time 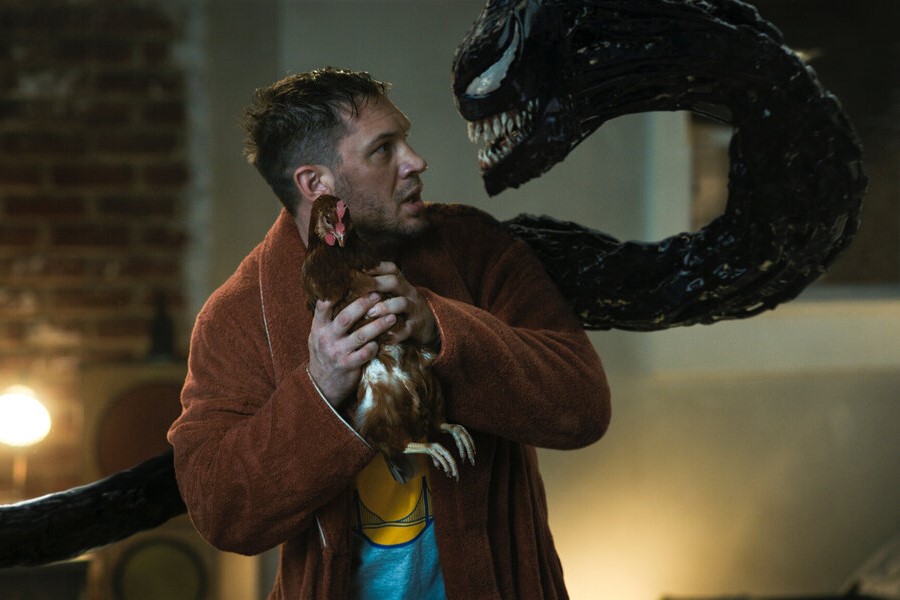 Tom Hardy, holding a chicken and arguing with an alien symbiote in Venom: Let There Be Carnage. Are you not entertained?

In almost every way, Venom: Let There Be Carnage is an improvement on the first Venom movie. That doesn’t make the new one good, you understand; for the most part, Let There Be Carnage is just as messy, dopey and obnoxious as the first go-round, a clumsy origin story for a fan-favourite Spider-Man villain hampered by the fact that Spidey himself couldn’t be part of the story. (It’s a whole thing.) But even though it was hot garbage, Venom The First made a gobsmacking $850 million globally, meaning a sequel was inevitable, as long as producer/star Tom Hardy was willing to return.

Well, Tom Hardy is no dummy. He is a gifted actor who loves dogs and enjoys being ridiculous in movies, and his fingerprints are all over Let There Be Carnage, which often feels like a perverse attempt to take the piss out of the property while still having a good time.

It’s set in San Francisco? Well, we’re shooting it in London, with British actors playing Americans! Venom’s fan base is made up of aggro 90s fanboys? Let’s drill down on the idea that the brain-eating alien symbiote is in a codependent relationship with his human host Eddie Brock, and have a scene where Venom, having ejected himself from Eddie, goes to a masquerade, drapes himself in neon necklaces and makes a speech about coming out of the closet! We’re supposed to introduce characters with mutant powers out of nowhere? Here’s Oscar nominee Naomie Harris as Shriek, because why the hell not.

And then there’s Carnage, teased at the end of the first movie by a fright-wigged Woody Harrelson, whose convicted serial killer Cletus Kasady is destined to get his own symbiote and come after our heroes. Harrelson’s a great choice for the role, relishing the ridiculousness of it all while still committing to the emotional reality of the character, and of course he brings his own Natural Born Killers history to the picture for the olds. (Fun fact: this film reunites Harrelson with that film’s cinematographer Robert Richardson, and I would have loved to watch the two hang out at the coffee truck between setups.)

Andy Serkis, who knows a thing or two about CG performances, steps into the director’s chair, and he and Richardson go hard on the urban-gothic imagery; this is a comic-book movie that actually looks like a comic book, with wild angles and a whirling camera that recalls Sam Raimi’s Spider-Man trilogy.

The actors all go for it, too; Hardy seems more comfortable going for the broader comic notes of both Eddie and Venom; it’s just fun to picture him in a recording studio trying to hit exactly the right notes of Venom’s voice-over chatter. Michelle Williams is back as Eddie’s ex-fiancée Anne, who remains a one-note scold, but hey, Williams is a brilliant actor and this probably let her visit some nice museums with her family. Whatever makes the fans happy.

And that’s Venom: Let There Be Carnage, y’all. I hated the first one, I did not hate this one. It moves quickly, everyone’s enjoying themselves, there are at least three more laughs than the first one offered and it’s a full hour shorter than the Bond movie I saw the day before. That’s got to be worth something.