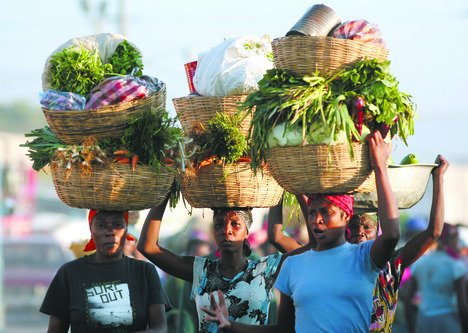 As quake victims were pulled from Haiti’s rubble, millions of people generously sent emergency cash. Good. Now good samaritans face another, more challenging responsibility: to help ensure the country’s future doesn’t head into a social earthquake that takes it back to its pre-?disaster past.[rssbreak]

The key to this is Haiti’s planting season, which begins in March. If only a trickle from the hundreds of millions invested in the occupying forces of multinational charities and foreign armies were diverted to supporting small farming ops, locals could seed a new life in place of the old dirt-?poor one.

Haiti’s countryside is the epicentre of this social quake, a process that ended in 10s of thousands of impoverished farmers fleeing to the cities, to the unprotected shantytowns destroyed when nature’s physical shakeup occurred. But rural Haiti is also where the healing can take place if the small farming sector can divert resources from the master plans of the occupying authorities.

Those trying to assist with rebuilding should look immediately to the countryside and ask two questions:

1) Why did so many people leave the land to move into substandard housing in an overcrowded city, in an earthquake zone no less?

2) Why has it been so hard for earthquake survivors to get access to food when the countryside once grew plentiful rice, potatoes, tomatoes, greens, bananas, cassava, peas, corn, papaya and mango? Was there a famine that no one reported?

The answers have partly to do with decisions made way back by the two men President Obama has put in charge of Haiti relief – Bill Clinton (also the point man for the UN’s secretary general) and George W. Bush.

As a condition of renegotiating over $1 billion in loans, much of it dating to the Duvalier family dictatorship, the IMF insisted the country reduce its tariff against rice imports to a negligible 3 per cent, about 20 per cent below the Caribbean average.

What was called “Miami rice,” mostly imports from one U.S. rice company, invaded the island. According to a 2004 study by Josiane Georges, imports of U.S.-?subsidized cheap rice turned Haiti into the largest rice importer in the western hemisphere. One of the peasants’ major cash crops was destroyed and the value of farm production in the GDP plummeted.

The two now very ?concerned past presidents established the very U.S. Farm Bill that subsidizes U.S. rice exports to the tune of over $1 billion a year. This dumping turned Haiti, a once agriculturally ?lush nation, into an urban maquiladora zone, a centre ripe for producing cheap manufactured goods for export.

Can it possibly be that vested interests, foreign powers and agencies, along with uninformed charitable generosity, are playing into a post-?quake rebuilding of this scenario?

In Haiti’s well-?organized and politically literate society, many groups have long complained that the government spends less than 7 per cent of its budget on ag improvements, mostly spent under the direction of some 800 NGOs, many of which are dependent on foreign connections.

By contrast, indigenous organizations such as the National Congress of Papaye Peasant Movement, with its 100,000 members, are given short shrift. The group, which bolsters self-?help measures, also champions the return of the Creole pig. The animal, well adapted to Haiti’s environment, was long the basis for farm family food security before the U.S. pressed for their eradication in the 80s, ostensibly because they might spread swine fever.

Though they receive modest assistance from alternative charities such as Grassroots International, most Haitian-?based self-?help groups have been elbowed aside by city-?oriented organizations backed by giant international funders.

Our job in all of this? Keep the pressure on so foreign powers don’t put up obstacles to sustainable, local farming and food self-?reliance. Imagine the tragedy of returning a whole nation of people to pre-?earthquake hunger.

With files from Meyer Brownstone.