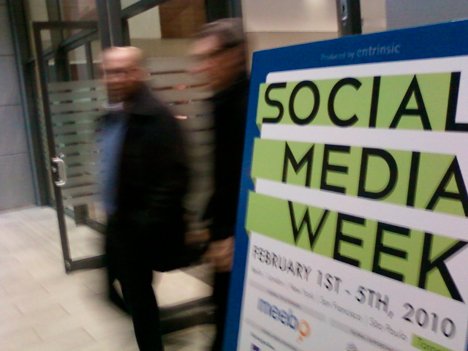 It’s kind of sad the digital generation won’t have anything tactile like the turntable or skateboard to mark their place when they’re not young anymore. At least they have the hashtag.

This week, Toronto and six other major cities around the world are celebrating that ubiquitous symbol to mark a Twitter #discussiontopic, and all the other ways ideas get spread through social media.

Toronto’s first annual Social Media Week descends on the city – and is almost completely sold out – this week.

The conference is bringing the city’s creative, entrepreneurial, political and commercial networking minds out from behind their screens to address the newest trends in Internet connectivity. 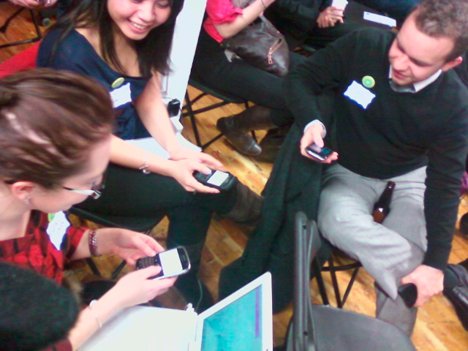 No Cheerleaders Allowed event holed up in a Chinatown office suit otherwise reserved for the day to day functionality Toronto design firm, The Blog Studio.

Distancing themselves from cheerleaders, they self-applied the name Haters. The event was billed as An Honest Conversation about Social Media, and all the criticism that went with it, but deteriorated rapidly into an amicable jaunt down the memory lane beside the information superhighway.

The drinking games lightened the mood. The rules were, drink when the fanboy-speak now synonymous with digital bullshit rears its ugly head. Play along.

“The first blog entry I ever wrote was about the benefit in not hoarding your ideas,” said Blog Studio’s director Lucia Mancuso. “This is why I do this: we get to share, think outside the box.”

The point they were making was an innovative one, while at the same time still very close to the ‘democratize information’ concept the web was based on.

“Toronto is really on the cutting edge of social media,” says Michael Dolan of Blog Studio. “People here are really receptive to it. They are cutting edge.”

“And all the people who are still watching TV are going to be dead in a couple years anyway.”

A panel comprised of assorted international tech analysts through the phrase, “If you don’t eat your own lunch, someone’s going to eat it for you,” around the room literally dozens of times, animating the Normandy Beach that is Canada’s wireless industry.

“In Canada we’re not as avant garde when it comes to social media. We’d rather be smart followers,” says some rich guy you’ve never heard of.

The panel went on to criticize Canada’s “quasi-monopolistic” telecom industry.

Seems no matter the creativity of the content, someone needs to cash in on the viewing pleasure of the general public. And they’re not quite as brazen as we thought.

Toronto’s Social Media Week mastermind Eli Singer disagrees entirely but was willing to concede that, like social media, the week’s intention is to become what you’re seeking from it.

“People define their space by their own realities,” he said after all was over with for day one.

Sitting in the basement of the MaRS Discovery building on College, he went through the relatively short and fast road the net’s evolution brought to his career and the people who rode the wave with him.

“There are all different dimensions,” Singer says. “People define it for themselves by how they do what they do.”

Now the head of Toronto social communications agency, Entrinsic, Singer’s something of a pioneer himself. In 2006 he launched the first the World Wildlife Fund’s first crack at social media with a blog and a demonstration downtown wherein they spread 3000 black balloons in the shadow of the CN Tower to represent the amount of CO2 put into the ozone every day of each person in Toronto.

In the same year Singer launched Case Camp with the same basic edu-social goal in mind as SMW which gradually grew to the point that sizeable venues at cost became harder to find.

He was asked by New York digital strategist and Social Media Week founder, Toby Daniels to host Toronto’s maiden social voyage based on his work on Case Camp.

“The events are free,” he says “but lots of people’s effort went into making them what they are.”