The earth is bleeding 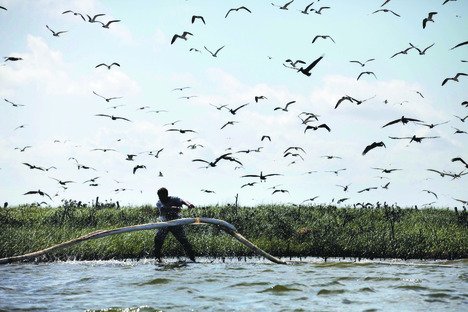 Plaquemines Parish, Louisiana – Everyone gathered for the town hall meeting had been repeatedly instructed to show civility to the gentlemen from BP and the federal government.

The officials had made time in their busy schedules to come to this high school gymnasium on a Tuesday night in this, one of many coastal communities where brown poison was slithering through the marshes in the aftermath of the Deepwater Horizon oil rig explosion April 20.

And for a while the crowd, mostly made up of fishing families, listened patiently to Larry Thomas, a genial BP public relations flack, as he told them that he was committed to “doing better” to process their claims for lost revenue.

They heard out the suit from the U.S Environmental Protection Agency as he informed them that, contrary to what they have read, the chemical dispersant being sprayed on the oil was perfectly safe.

But patience started running out by the third time Ed Stanton, a U.S. Coast Guard captain, took the podium to reassure them that “the Coast Guard intends to make sure that BP cleans it up.”

“Put it in writing!” someone shouted out.

The air conditioning had shut off and the coolers of Budweiser were running low. A shrimper named Matt O’Brien approached the microphone.

“We don’t need to hear this any more,” he declared, hands on hips. “We just don’t trust you guys!”

And with that, such a loud cheer rose up from the floor, you’d have thought the Oilers (the unfortunately named high school football team) had scored a touchdown.

The showdown was cathartic if nothing else.

For weeks, residents had been subjected to a barrage of pep talks and extravagant promises. Every time they turned on their TVs, there was BP boss Tony Hayward offering his solemn word that he would “make it right.”

Or else it was President Barack Obama expressing his absolute confidence that his administration would “leave the Gulf Coast in better shape than it was before.”

But for people whose livelihoods put them in intimate contact with the delicate chemistry of the wetlands, it also sounded completely ridiculous.

Once the oil coats the base of the marsh grass, as it had already done just a few miles from here, no miracle machine or chemical concoction can safely get it out.

You can skim oil off the surface of open water, and you can rake it off a sandy beach, but the larvae of countless species for which the marsh is a spawning ground – shrimp, crab, oysters and fin fish – will be poisoned.

It was already happening. Earlier that day, I travelled through nearby marshes in a shallow-water boat. I saw a red-winged blackbird perched atop a 2 metre blade of oil-contaminated marsh grass. Death was creeping up the cane. The small bird might as well have been standing on a lit stick of dynamite.

If oil seeps deeply enough into the marsh, it will not only kill the grass above ground but also the roots. Those roots hold the marsh together, keeping bright green land from collapsing into the Mississippi River delta and the Gulf of Mexico.

So not only do places like Plaquemines Parish stand to lose their fisheries, but also much of the physical barrier that lessens the intensity of fierce storms like Hurricane Katrina. Which could mean losing everything.

The fishing families up and down the coast do not just gather food, after all. They hold up an intricate network that includes family tradition, cuisine, music, art and endangered languages, much like the roots of grass holding the land in the marsh.

BP is well aware of the limits of recovery. The company’s Gulf of Mexico regional oil spill response plan specifically instructs officials not to make “promises that property, ecology or anything else will be restored to normal.” Which is no doubt why its officials consistently favour folksy terms like “make it right.”

This Gulf Coast crisis is about many things: corruption, deregulation, the addiction to fossil fuels. But underneath it all, it’s about our culture’s dangerous claim that we can radically manipulate and re-engineer nature with minimal risk to the natural systems that sustain us.

BP cannot plug the hole in the earth that it made. Obama cannot order brown pelicans not to go extinct (no matter whose ass he kicks). No amount of money – not BP’s recently pledged $20 billion – can replace a culture that has lost its roots. And while our politicians and corporate leaders have yet to come to terms with these humbling truths, the people whose air, water and livelihoods have been contaminated are losing their illusions fast.

During his congressional testimony on June 17, Hayward said: “The best minds and the deepest expertise are being brought to bear” on the crisis, and that “with the possible exception of the space program in the 1960s, it is difficult to imagine the gathering of a larger, more technically proficient team in one place in peacetime.”

Early Europeans, like indigenous people the world over, believed the planet to be a living organism, full of life-giving powers but also wrathful tempers.

There were, for this reason, strong taboos against actions that would deform and desecrate “the mother,” including mining.

The metaphor changed with the unlocking of some (but by no means all) of nature’s mysteries during the scientific revolution of the 1600s. With nature now cast as a machine, devoid of mystery or divinity, its component parts could be dammed, extracted and remade. Nature still sometimes appeared as a woman, but one easily dominated and subdued.

Francis Bacon best encapsulated the new ethos when he wrote in 1623 that nature is to be “put in constraint, moulded, and made as it were new by art and the hand of man.”

Those words may as well have been BP’s corporate mission statement.

BP bragged that, at its Tiber prospect in the Gulf of Mexico, it now had “the deepest well ever drilled by the oil and gas industry,” as deep under the ocean floor as jets fly overhead.

Imagining and preparing for what would happen if these experiments went wrong occupied precious little space in the corporate imagination. As we have all discovered, the company had no systems in place to effectively respond to this scenario.

Explaining why it did not have even the ultimately unsuccessful containment dome waiting to be activated on shore, a BP spokesman, Steve Rinehart, said: “I don’t think anybody foresaw the circumstance that we’re faced with now.” Apparently, it “seemed inconceivable” that the blowout preventer could ever fail, so why prepare?

The corporate and governmental response to the Gulf disaster – from the freewheeling use of chemical dispersants to the heavy-handed restrictions on journalists – has been rife with the same brand of arrogance that created the disaster in the first place.

Risk denial continues unabated, with Louisiana politicians indignantly opposing Obama’s temporary freeze on deepwater drilling. By far the most sociopathic reaction, however, comes from veteran Washington commentator Llewellyn King: rather than turning away from big engineering risks, we should pause in “wonder that we can build machines so remarkable that they can lift the lid off the underworld.”

Thankfully, many are taking a very different lesson from the disaster, standing in wonder at our powerlessness to cope with the fierce natural forces we unleash.

There is something else, too. It’s the feeling that the hole at the bottom of the ocean is more than an engineering accident or a broken machine. It’s a violent wound in a living organism it is part of us. And thanks to BP’s live camera feed, we can all watch the Earth’s guts gush forth, in real time, 24 hours a day.

John Wathen, a conservationist with the Waterkeeper Alliance, was one of the few independent observers to fly over the spill in the early days of the disaster. After filming the thick red streaks of oil that the Coast Guard politely refers to as “rainbow sheen,” he observed what many had felt: “The Gulf seems to be bleeding.”

This imagery comes up again and again in conversations and interviews. Monique Harden, an environmental rights lawyer in New Orleans, refuses to call the disaster an “oil spill” and instead says, “We are hemorrhaging.” Others speak of the need to “make the bleeding stop.”

And this is surely the strangest twist in the Gulf Coast saga: it seems to be waking us up to the reality that the earth never was a machine. After 400 years of being declared dead, and in the middle of so much death, the earth is coming alive.

In addition to identifying with the earth as a living, injured organism, the experience of following the oil’s progress through the ecosystem has become a kind of crash course in deep ecology. Every day we learn more about how a terrible problem in one isolated part of the world actually radiates out in ways most of us could never have imagined.

One day we learn that the oil could reach Cuba – then Europe. Next we hear that fishermen all the way up the Atlantic in Prince Edward Island, Canada, are worried because the blue-fin tuna they catch off their shores are born thousands of miles away in those oil-stained Gulf waters. And we learn, too, that for birds the Gulf Coast wetlands are the equivalent of a busy airport hub – 110 species of migratory songbirds and 75 per cent of all migratory U.S. waterfowl.

Just in case we still didn’t get it, a few days ago a bolt of lightning struck a BP ship like an exclamation mark, forcing it to suspend its containment efforts.

Then came a hurricane to spread BP’s toxic soup further. If we did not know the dangers of disrupting the earth’s geology and chemistry, we are learning it now.3

Naomi Klein is the author, most recently, of The Shock Doctrine: The Rise Of Disaster Capitalism (Vintage).