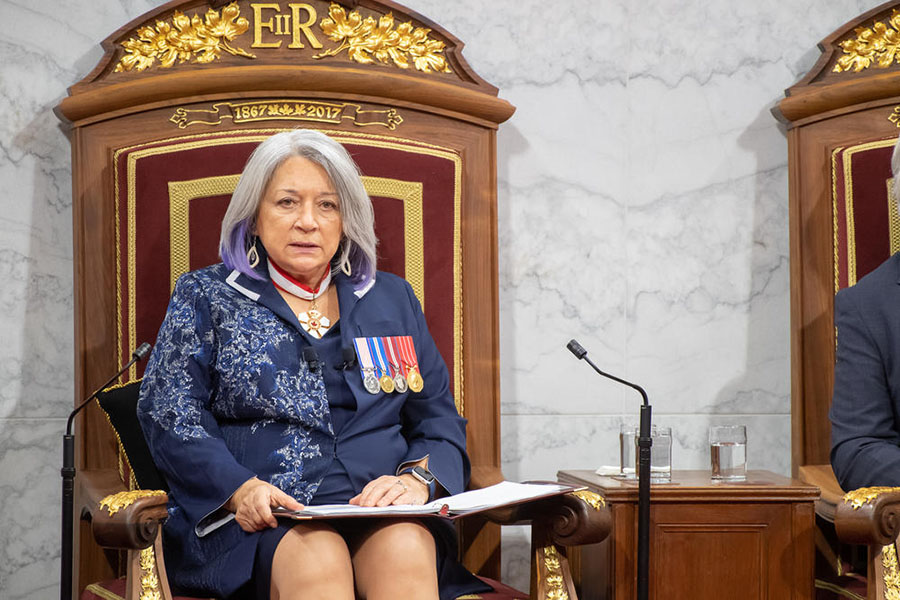 It was delivered in part in Simon’s native Inuktitut language and began with a land acknowledgement. Simon encouraged MPs “to seek out the truth, and to learn about the lived realities in First Nations, Inuit and Métis communities.”

The speech laying out the Liberal government’s agenda for the 44th parliament noted progress in reconciliation efforts with Indigenous peoples.

“Already, I have seen how Canadians are committed to reconciliation. Indigenous Peoples are reclaiming our history,  stories, culture and language through action,” Simon said. Reconciliation was one of three main themes in the speech, along with pandemic recovery and the climate crisis.

“Our Earth is in danger. We cannot afford to wait,” Simon said.

A once-in-a-century pandemic is giving way to a climate crisis right before Canada’s eyes in British Columbia, where floods and mudslides have ravaged southern parts of the province, taking out whole highways with it. The province has declared a state of emergency.

Further north in the interior, meanwhile, the Wet’suwet’en continue their decade-long battle against Coastal GasLink’s 670-kilometre pipeline to carry fracked gas through some 200 kilometres of unceded Indigenous territory.

On November 18, the RCMP, who had been flown into the territory days earlier, moved in and arrested 20 people blockading a forest access road to Coastal GasLink’s operations.

It’s like 2020 all over again. The scenes were reminiscent of the weeks before the pandemic. Only, it’s practically 2022 and we seem to be right back where we started on the climate crisis – and reconciliation.

Back then, the public outcry over the actions of heavily armed RCMP officers sparked blockades of rail lines across the country. A nation had finally been awakened to the plight of Indigenous peoples, or so it seemed.

A smattering of similar actions took place this week, including in Toronto, following the most recent arrests. #ShutDownCanada has also started trending on social media platforms as environmental and Indigenous rights activists gear up for what’s shaping up to be a winter of actions.

In an interview with the Toronto Star, Crown and Indigenous Relations Minister Marc Miller expressed concerns that the tensions in Wet’suwet’en may once again spill over into country-wide blockades.

But it didn’t have to be this way.

Back in 2020, the federal government signed a memorandum of understanding with hereditary chiefs of the Wet’suwet’en recognizing their land rights. In fact, the Supreme Court of Canada established the authority of hereditary chiefs over their ancestral lands in a historic 1997 decision.

But that recognition has failed to stop Coastal GasLink’s plans as several band councils along the proposed route of the pipeline support the project. It’s a familiar dilemma: with few economic options available, band councils are forced to surrender to whatever development comes their way in the name of economic survival.

The hereditary chiefs proposed alternative routes for the pipeline to mitigate environmental fallout from clearcutting (and the resulting effects of runoff of fish stocks in nearby rivers), but those proposals have been rejected by Coastal GasLink.

Hereditary chiefs moved earlier this year to issue eviction notices on the company. When the company declined to comply, blockades cut off a forest access road leading to CGL’s operations. And so here we are again.

The company has been granted an injunction by the BC Supreme Court to remove the blockades, as it had been in 2019 and 2020. The company is now also seeking conditions for the release of several of the individuals arrested, including denying them access to Wet’suwet’en territories and “exclusion zones” around Coastal GasLink work sites.

Grand Chief Stewart Phillip, president of the Union of British Columbia Indian Chiefs, is calling on the federal government to intervene and declare a moratorium on all fossil fuel expansion “in the wake of clear and present climate catastrophe.” He was referring to the devastation in BC.

Others, like David Suzuki, have been more pointed. Suzuki warned at an Extinction Rebellion protest on Vancouver Island on November 20 that  “there are going to be pipelines blown up if our leaders don’t pay attention to what’s going on.”

Suzuki clarified later that he does not support violence. But it’s already happening on behalf of oil and gas companies. And the stakes are only getting higher as the effects of human-caused climate change wreak more havoc.

On the west coast this year alone, heat domes, wildfires, “atmospheric rivers” and floods have destroyed homes and livelihoods and killed hundreds of people. Governments and Canada’s biggest banks, meanwhile, continue to invest in oil and gas infrastructure to the tune of billions of dollars.

“This is the moment for bolder climate action,” Simon said in the Throne Speech. In reality, the moment was a long time ago.