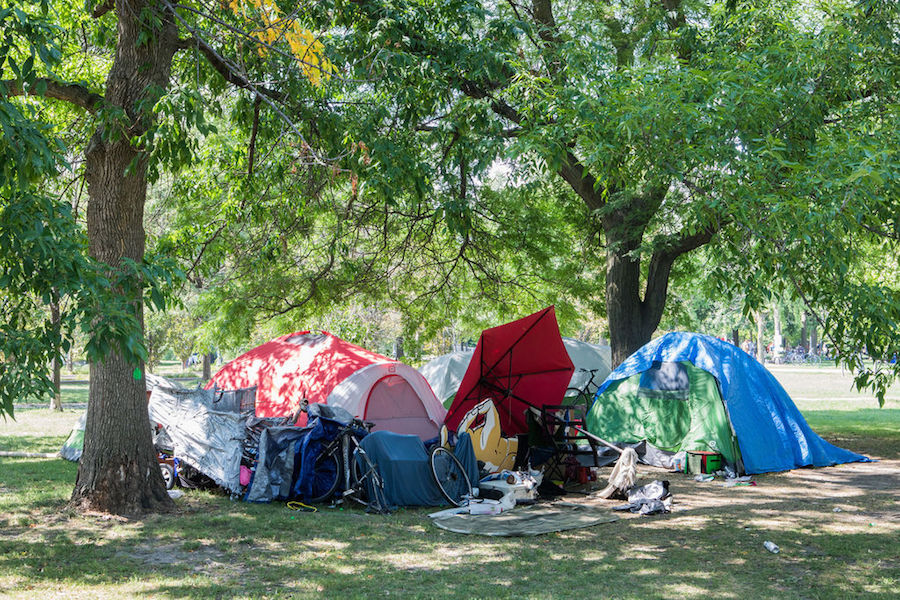 Homeless advocates and the city of Toronto each won respective court rulings around park encampments and physical distancing in shelters in the past week.

Last Thursday, an Ontario Superior Court ruled that the city of Toronto failed to implement correct physical distancing in shelters.

Aa coalition of human rights and housing advocates took the city to court back on October 1, in an ongoing battle that started near the beginning of the pandemic.

The coalition argued that not only did the city fail to enforce correct physical distancing standards, but also failed to provide accurate information on the status of the enforcement.

The judgement noted that “any failure by the City to take all reasonable steps to meet physical distancing standard in congregate shelter settings heightens an already significant risk of the spread of COVID-19 to some of the most vulnerable members of our society.”

The ruling was critical of the city’s definition of physical distancing between shelter beds, stating it appears to have been decided “without the benefit of public health guidance.”

However, the court did not agree that the city acted in bad faith by concealing the fact that physical distancing standards hadn’t been met in all shelters.

The Ontario Superior Court ordered the city to resume regular reporting and data collection to the coalition regarding achieving physical distancing.

City estimates put the number of people living in parks and encampments around 400 to 500, though frontline workers and housing activists say that number is closer to over 1,000.

Many people have opted to live outside rather than live in shelters since the coronavirus pandemic began. The city has also sought to clear encampments and relocate people in temporary housing, hotels and shelters.

“As the second wave of COVID-19 is well under way and first snow could fly any day, it is urgent and vital that the City of Toronto finally and fully provide appropriately physically distanced shelter space for its poorest residents,” Doug Johnson Hatlem, a street pastor with one of the coalition members, Sanctuary Ministries of Toronto, said in a press release.

“Hundreds of those residents remain outdoors in tents or otherwise sleeping rough due to legitimate fears of contracting a deadly and highly contagious disease, and because the shelters are crowded and full,” he added.

City can continue to clear encampments in city parks

In a ruling on Wednesday, the Ontario Superior Court ruled in favour of the city in an injunction decision regarding encampments.

A group consisting of the Toronto Overdose Prevention Society and the Ontario Coalition Against Poverty, along with 14 individuals living in encampments, filed an application to challenge a bylaw preventing people from living in parks overnight.

The Ontario Superior Court of Justice heard heard arguments on October 1 and released a decision on October 21.

The ruling clarified that the city is not being encouraged to remove residents from parks, but would not ban the city from doing so either.

“My decision is based on evidence that dates from the summer months when the incidence of COVID-19 was low, the weather was warm, and the city had specific concerns about particular group encampments,” Judge Paul Schabas wrote.

He noted that the decision to enforce the bylaw should be dependent on different factors, including whether there is enough shelter spaces available and the effects of an encampment on the surrounding area.

City officials have said encampments create significant health and safety concerns for those living outside.

“Lack of clean drinking water, access to showers and washrooms, medical care, harm reduction services, as well as safe heating sources give rise to dangerous conditions in encampments and the areas surrounding them,” the city said in a statement following yesterday’s ruling.

Zoë Dodd, an activist and organizer with the Toronto Overdose Prevention Society, wrote in a tweet, “city also trying to claim that encampments aren’t safe because they don’t have access to water or facilities, yet they could – if the City opened them.”