For many Canadians, the idea of reconciliation with Indigenous peoples died last week when the RCMP sent heavily-armed police to break up the Unist'ot'en protest camp that has been blocking pipeline plans for a decade in northern BC 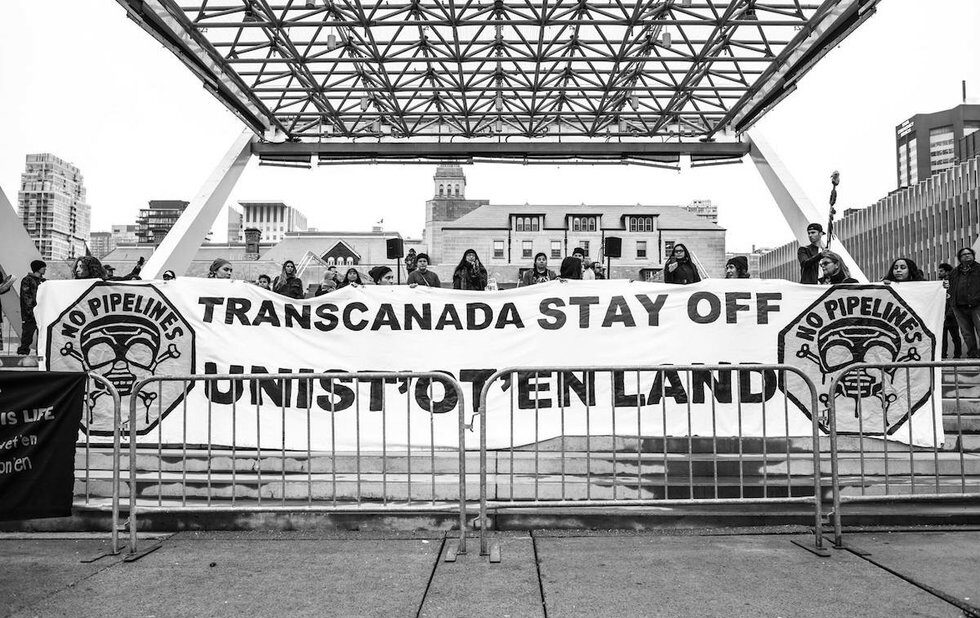 I counted 2000-plus protestors at Nathan Phillips Square. Many more would join the walk to the Financial District where several round dances stopped traffic.

The demonstrators were friendly and engaged at Tuesday’s (January 8) rally in Toronto in support of land protectors of the Unist’ot’en clan in northern BC. But they’re also testy over news the RCMP had moved the day before on the Unist’ot’en protest camp that has been blocking a number of pipeline plans, including TransCanada’s Coastal Gas Link, since 2009. Fourteen people were arrested in BC.

A  bit of excitement breaks out near the end of the Toronto action as some protestors try to pay an impromptu visit to the offices of one of TransCanada’s investors at 100 University.

Most were stopped by security before they were able to get on the elevators but a dozen or so people manage to get up to the offices to make their point and back down again without being arrested.

For many Canadians, the idea that Canada is on the road to reconciliation with Indigenous peoples, died that day.

As Indigenous rights activist Jesse Wente told the crowd at Nathan Phillips Square, “Reconciliation does not come at the end of a gun.” 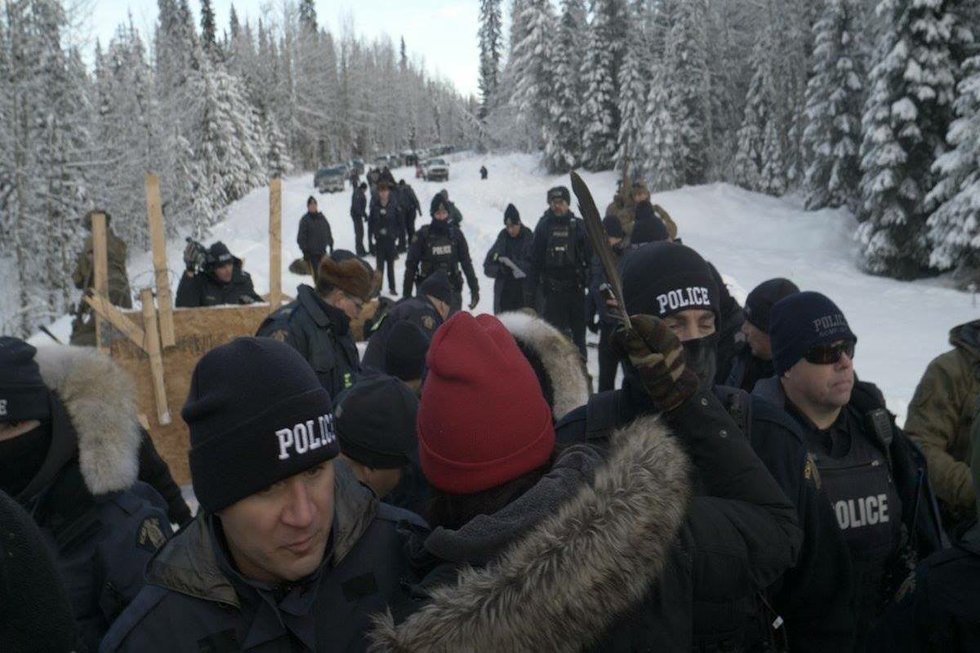 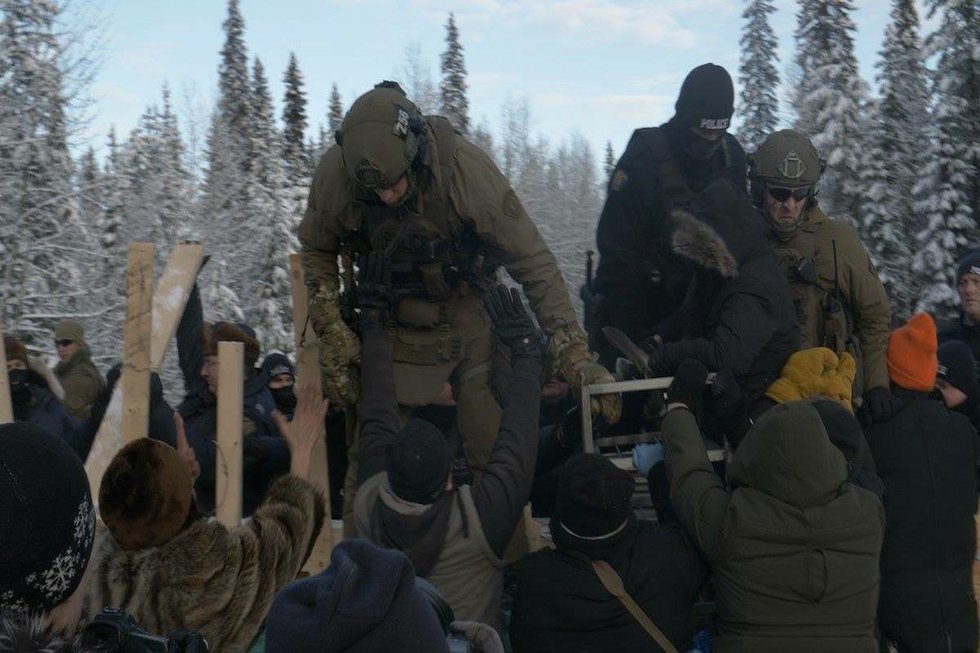 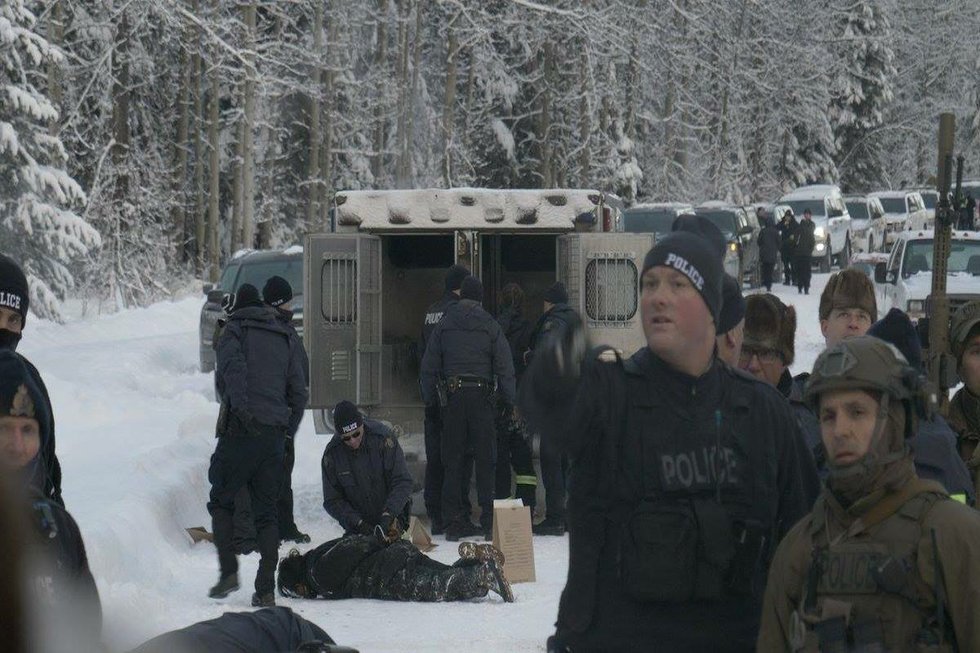 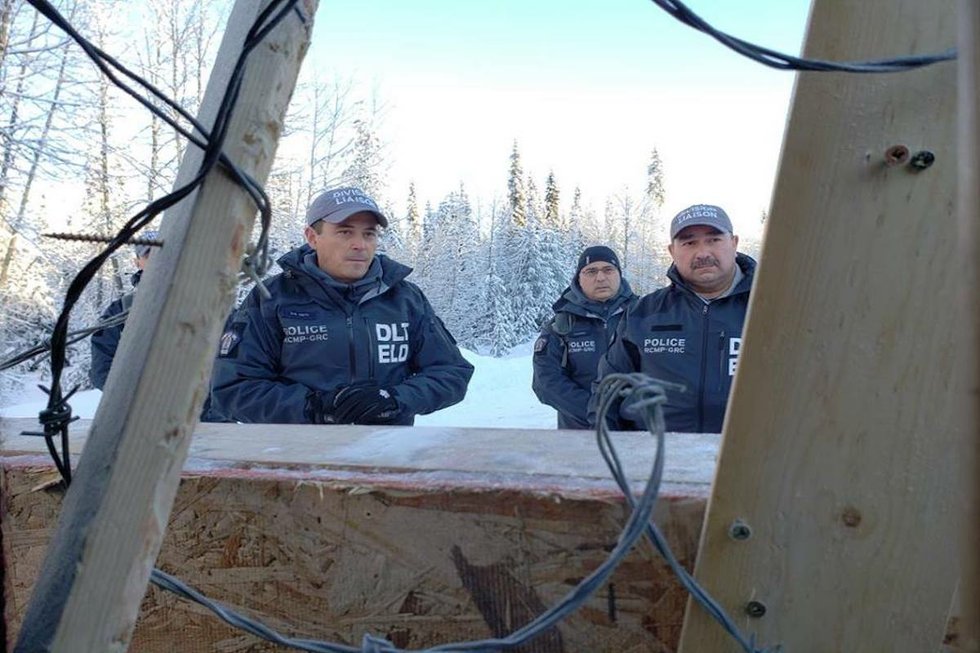 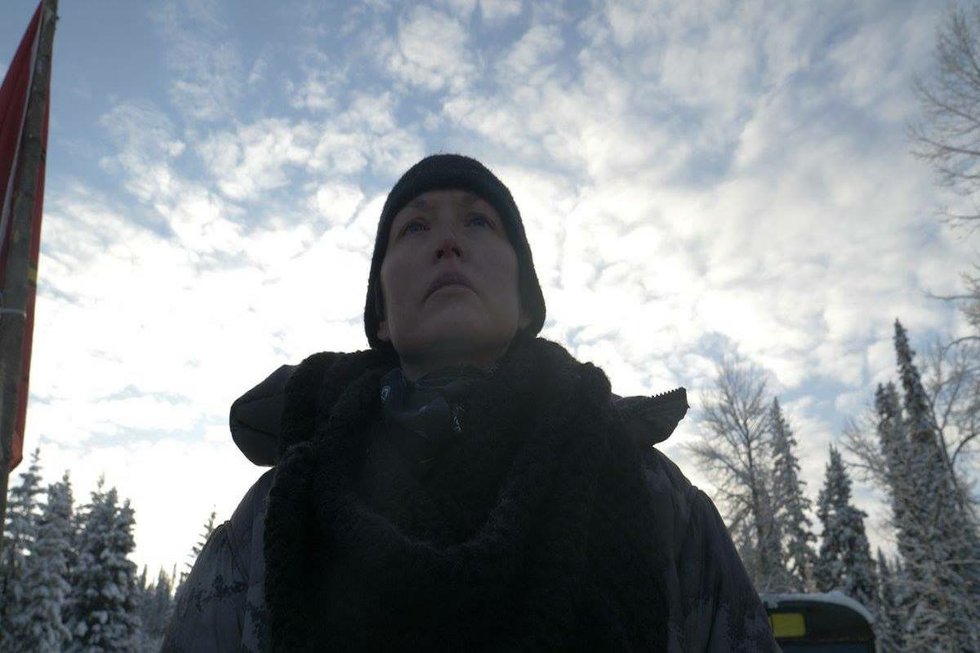 The proposed pipeline starts in the fracked gas fields of northeastern British Columbia and will snake through more than 670 kilometres of rugged mountain to Kitimat, where a Liquefied Natural Gas (LNG) Plant will compress the methane into a super-cooled liquid for shipping.

The purpose of the pipeline and the $40 billion LNG facility is to enable five multinationals based in Korea, Holland, Malaysia, China and Japan to ship BC’s gas reserves in tankers through its coastal fjords post-haste and onto an increasingly iffy global petroleum market.

But what happens to those who refuse to sign on to last century’s vision of energy and employment? Or to those who have a deep history and connection to the surrounding landscape, whose stewardship doesn’t line up with the ambitions of governments and multinational corporations?

The Canadian public found out on January 7 when the RCMP sent heavily armed police to break up the Unist’ot’en clan’s protest camp in unceded Wet’suwet’en territory.

The Unist’ot’en established a checkpoint in the path of several proposed pipelines by a bridge that is the only access to the area in 2009. They’ve held off construction ever since, building a community at the camp with a permaculture garden and a healing centre.

Freda Huson of the Unist’ot’en says, “All Wet’suwet’en clans have rejected the pipeline because our medicines, our food and our water are all here and not replaceable.” Huson and her partner Warner Naziel (aka Chief Smogelgem) have been spokespeople for the Unist’ot’en camp.

Last month, CGL went to court to request an injunction to stop them, “and all other persons unknown to the Plaintiff, [from] occupying, obstructing, blocking, physically impeding or delaying access, at or in the vicinity of the area.”

Though the Unist’ot’en Camp people were given until January 31 to prepare further arguments for the judge to consider, BC Supreme Court Justice Marguerite Church awarded CGL an interim injunction effective December 17.

John Ridsdale (aka hereditary Chief Namoks) told the Aboriginal Peoples Television Network he was “heartbroken” by the decision. Other clans quickly moved in to support the Unist’ot’en land protectors. On December 18, CGL employees were stopped by a new checkpoint set up by the neighbouring Gitdumt’en clan.

The camp had been on tenterhooks throughout the holidays as nearby towns started filling up with RCMP, the same colonial police force that rounded up Indigenous people to starve on tiny postage-stamp reserves, jailed those who resisted and forced children into Indian residential schools.

Molly Wickham of the Gitdumt’en points out: “People like to think that things have gotten better in so-called Canada, and in our communities, but we know the state is willing and capable of using the same kind of violence that they have used against our people for the last 150 years.”

The Wet’suwet’en territory represents interesting possibilities for genuine reconciliation. With no treaties or actual land concessions, it is entirely unceded territory. There are fewer barriers here to First Nations resuming their democracies, and reclaiming their lives and lands in modern ways and times. It represents an opportunity for Canada to plan a shared sustainable future.

Instead, as Chief Smogelgem explains, “The provinces and the federal government have decided that they don’t want to deal with us, that they would rather go to people who are willing to say yes to them.”

Smogelgem is referring to the fact that several local band councils support the project. CGL claims to have signed agreements with “all of the elected Indigenous bands along its pipeline route in British Columbia.”

When asked about those at the camp opposed to the project, she claims that, “We have attempted to reach out and, to the best of our ability, keep those lines of communication open. With all the investment deals hanging in the balance, we have to move forward with the project – particularly now that we have received final investment decision from our joint venture partners, with LNG Canada.” 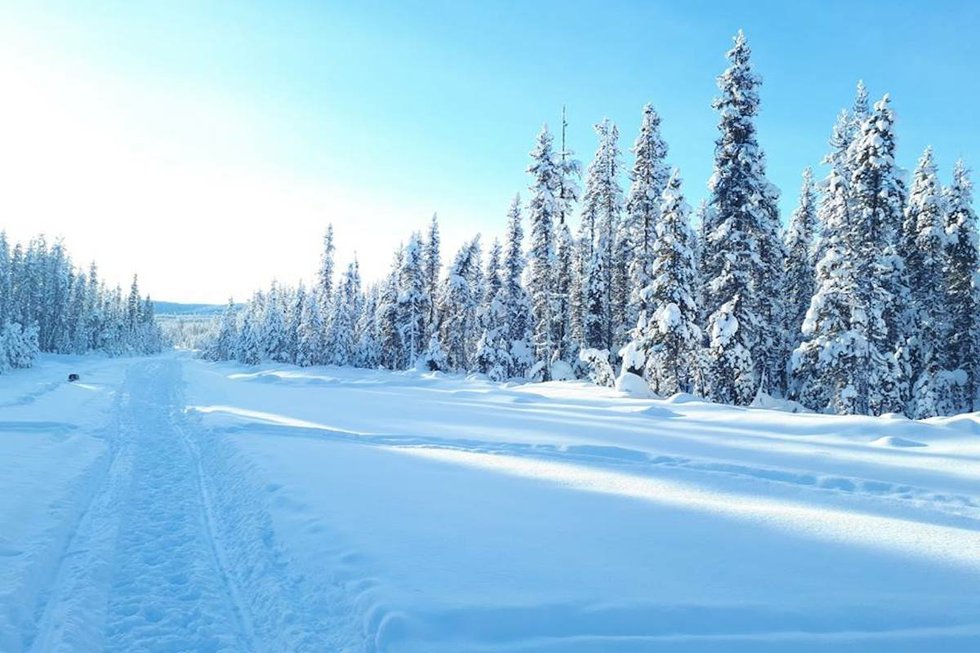 When you look at petroleum plans for BC, it’s clear to First Nations why the Canadian government delayed implementing the United Nations Declaration on the Rights of Indigenous Peoples, which emphasizes the right to free, prior and informed consent for activity on Indigenous territory – the right, in a word, to say no. (The Harper government was one of four to object to the declaration when it was passed by the UN in 2007. The Trudeau government officially removed Canada’s objector status in 2016).

The clan-based democracy of the Wet’suwet’en have been saying no to development in their traditional territory since 2007. But band councils on struggling reserves sign on to such projects for reasons familiar to any community in petroleum country – jobs and donations to under-funded community projects. But behind the carrot is a big stick and those who oppose are likely to find themselves sued and facing the RCMP on a winter road.

It’s confusing when Indigenous nations seem to have double governments that contradict each other. Blame that on the Indian Act, which imprisoned Indigenous people on small reserves and replaced traditional governance with direct rule by Indian agents, before imposing a system of elected band councils.

Many First Nations persisted with their traditional governance models underground, and they are gaining strength in communities like Six Nations and the Wet’suwet’en. Chaos nurtured over a century won’t be undone in a generation — the nations need time and resources to heal and reclaim their identities.

The PM has declared that, “We need to get to a place where Indigenous peoples in Canada are in control of their own destiny, making their own decisions about their future,” but he doesn’t seem interested in getting there with the Unist’ot’en any time soon – he was all smiles at the announcement of the $40 billion Kitimat LNG project and its associated pipeline back in October, describing it as “the single largest private sector investment in Canadian history.”

As planet-cooking technologies continue to clash with those who put biodiversity and human rights ahead of corporate profits, the Wet’suwet’en continue to reclaim democracy and defend their territories under their stewardship.

On December 21, in an open letter hereditary chiefs made it clear why they reject the pipeline jobs and payments that could temporarily afford their communities a middle-class lifestyle:

“Today, we are faced with a climate catastrophe that will have global impacts to humanity and the earth we all call home. Instead of finding solutions, our government is providing bailouts to destructive industry, as well as contracting RCMP to enforce their efforts against the Peoples whose lands, livelihoods and future generations are at stake.”