After months of speculation, John Tory surprised the media pundits (well, some of them see Five Fearless Predictions, NOW, December. 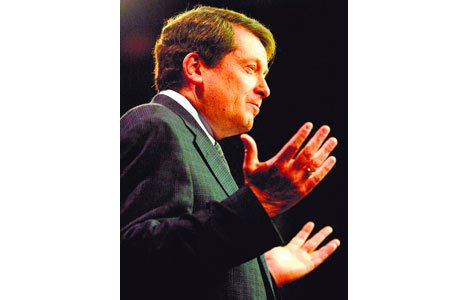 After months of speculation, John Tory surprised the media pundits (well, some of them see Five Fearless Predictions, NOW, December 31-January 6) by announcing Thursday, January 7, that he wouldn’t be running for mayor after all.

Up next for the would-be mayor? Not just that widely reported gig as voluntary chair of the Toronto City Summit Alliance. Turns out he’s been approached about taking the job of CEO of the Pan Am Games. That’s the scoop. But first, about that unexpected about-face. Was he pushed?

Tempting to think so, given the effort he made to point out an opinion poll showing him ahead of the other declared candidates for the mayor’s job.

Both the Star and the Globe ran stories just days before Tory’s reversal quoting insiders who said he was primed to make his candidacy official. What changed such a sure thing?

One source suggests Tory’s legendary indecisiveness got the best of him again, giving political friends and financial backers cold feet.

The official line offered by Tory at his press conference: a personal overture from former City Summit Alliance chair and founder David Pecaut to take over the org caused his big rethink. The Alliance announced January 7 that Tory, who’s served on the organization’s board since its inception in 2002, would be taking over as voluntary chair immediately.

“I am very excited about the possibilities the City Summit Alliance position offers to carry on David Pecaut’s legacy and work on the economy, the challenges facing the disadvantaged, the arts and the environment,” Tory wrote in an email to NOW this week. “I think he proved a lot can get done.”

How good a fit Tory will be for the org known for staking out progressive positions on environmental and social justice issues remains to be seen.

Who could forget his promise to “someday” phase out coal when he was PC leader. Or his call for “the rule of law” in the dispute between white property owners and natives in Caledonia?

Let’s not ignore Tory’s musings on private health care and the fact that he was a key backer of one Mel Lastman.

But, and there’s always a but when it comes to politics, a colder calculation on Tory’s part went into his decision to abandon the mayoralty. And that came after some sage advice from his political godfather, Bill Davis, the former premier for whom Tory served as principal secretary back in the day.

Indeed, there’s not a decision Tory would make in life, political or otherwise, without first asking his friend and mentor. What happened behind closed doors is anybody’s guess.

But anyone handicapping a race with three centre-right candidates already in the mix would know that a win wasn’t a foregone conclusion for John H., given the vote-splitting that could occur.

Tory had his options to weigh. Fortunately for him, there were alternatives.

Tory confirms that he was approached about the CEO job for the Pan Am Games but says he has “nothing further to report” about whether he intends to allow his name to stand on the short list scheduled to go to the Games’ board of directors soon – “a top priority,” says one insider.

Roger Garland, chair of the Toronto 2015 Games board, has talked about the right person for the CEO job: “It requires someone with quite a broad business background.”

Seems like a fit for Tory. It’s not clear his job with the Alliance will be full-time.

“John will be putting in as many hours as are required of him based on the stages and progress of our various projects,” says Alliance spokesperson Rebecca Geller.

Of course, any appointment to the Pan Am Games board would have to be approved by the provincial Liberals, who, word is, would be happy to endorse Tory for no other reason than good optics.

Sitting governments like to throw a few plums to political opponents so no one will notice, or care, when they appoint 100 of their friends to cushy jobs.

Also, a TV deal for the Games has still to be negotiated, and Tory, as a former Rogers exec and Canadian Football League commissioner, knows a little bit about television.

With Tory as the Games’ CEO, there’d also be the added benefit of having someone who’s not a Liberal to pin the blame on in the event the spectacle goes south.

If the Games end up being a success, then another political comeback for Tory may still be in the cards.

As he said at his press conference last week, in politics it’s never wise to say never.