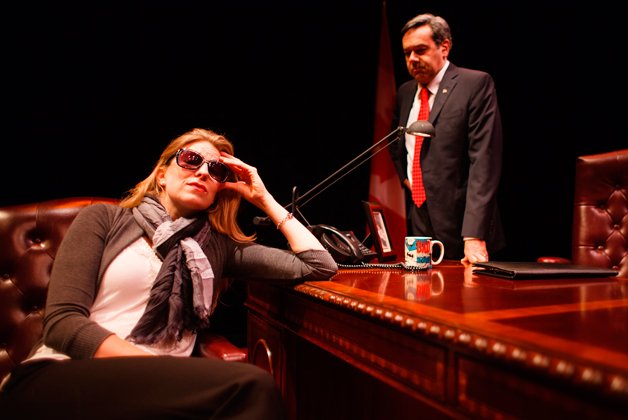 Don’t look for any overt Harper-bashing in Michael Healey’s Proud, despite the buzz that’s made the play one of the most talked-about theatre events of the fall.

Instead, you’ll find a humorous, thoughtful, sometimes even philosophical piece about the nature of politics in the Harper era: how those in power manipulate the populace, the media and even their fellow politicians without being totally soulless.

It begins with a what-if scenario: the 2011 national election gives the Conservatives a majority – despite receiving a small popular vote – that includes 59 Conservative MPs (rather than the actual NDP sweep) from Quebec, many of them rookies. One of the newbies is Jisbella Lyth (Maev Beaty), a single mom and former St-Hubert manager who the Prime Minister (Healey) appraises as a useful member of his team.

With the help of Cary (Tom Barnett), his chief of staff, the PM begins coaching Jisbella to be a political decoy, bringing up hot-button issues that will divert the media from the PM’s actual agenda.

It starts well enough, but Jisbella isn’t quite the willing tool the senior politicians expect.

Deftly written and often laugh-out-loud funny, Healey’s script keeps surprising us, taking unexpected turns both in its narrative and character development. We might think we know what drives a Conservative PM, but Healey’s Canadian leader is often sympathetic both as a politician and a human being. Still, when he’s crossed, we watch his face harden and a rigidity take over his body. The PM can even crack a joke, though often it’s delivered in the flattest of tones he’s a representative of the people who admits that “people are not my strong suit.”

Beaty’s Jisbella is a marvelous creation, from her first entrance in which she seeks something you’d never think to look for in the PM’s office. Sensual, clever and more open than her handlers want her to be, this new MP wins us from the start and keeps us on her side for the whole show, whether she’s reciting a recipe or plucking her eyebrows.

The multisided relationship between the PM and Jisbella anchors this production, smartly directed by Miles Potter.

Cary has a natural stiffness that Barnett doesn’t shy away from, but this staff head is also aware that he might have to fall on a sword for his boss. Barnett conveys the “well, whatever” quality of that devotion as well as a touch of humanity like the PM, he realizes that politics is at base emotional rather than intellectual.

Healey mixes into his plot some well-expressed thoughts about what Canadians want in their leaders, qualities like the importance of self-reliance, positive beliefs and a commitment to appropriate-sized government. There’s even a look forward at the end of the play, but here the writing isn’t as well integrated into the whole, despite the work of Jeff Lillico as the show’s fourth character.