Many of this year's top exhibitions explored Canada's colonial legacy, the concept of nationhood and the meaning of monuments 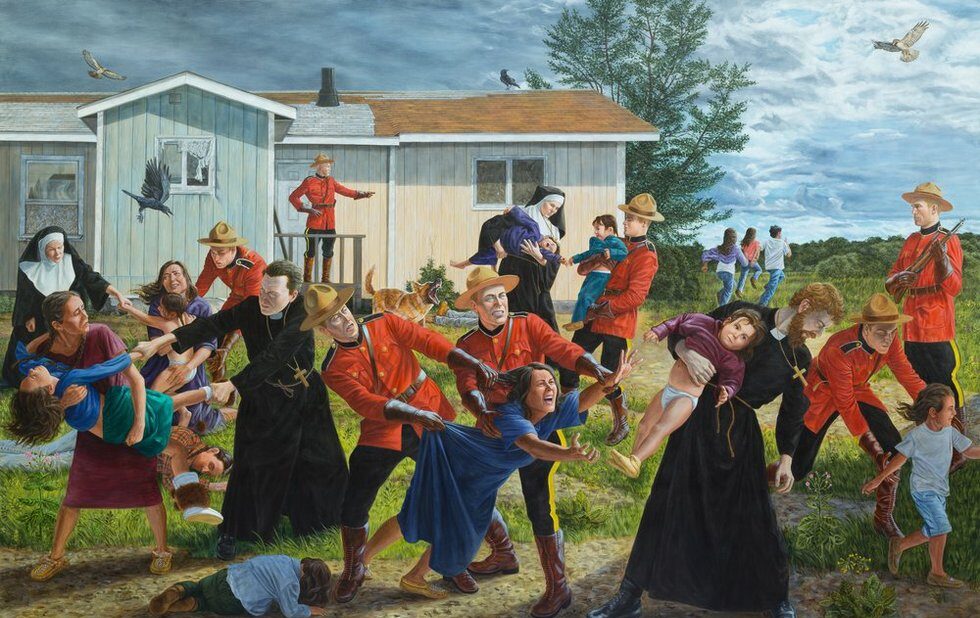 The Scream, a painting by Kent Monkman

1. Kent Monkman, Shame And Prejudice: A Story Of Resilience, Art Museum at the University of Toronto (January 26-March 5)

In his most integrated and powerful show yet, Monkman deployed history paintings, installations and artifacts to tell the story of Indigenous people in Canada through the eyes of Miss Chief Eagle Testickle, his two-spirited alter ego. Though there’s humour in her appearances as a “country wife” and nude model posing with the fathers of Confederation, there’s also a hefty dose of pain and anger in works that dramatize starvation, forced treaties, residential schools, incarceration and murdered women. (The show is touring Canada, opening in Kingston in January, and being adapted into a book.) Fran Schechter

Former AGO Canadian art curator Andrew Hunter and curator Anique Jordan put together this politically charged sesquicentennial show before Hunter resigned to join the Art Gallery of Guelph. Works by mostly Black, Indigenous and Asian-Canadian artists, both emerging and established, dealt with Indigenous perspectives, immigrant dislocation, Black culture and activism, and migrant agricultural workers. We might not see such radicalism at the institution again. FS

Go see this show of contemporary work by Canadian artists curated by Swapnaa Tamhane. Then take a look at the museum’s permanent collection. The net effect is to better understand all artworks as cultural artifacts. It’s one of the great accomplishments of this sesquicentennial project, which presents a stunning range of art practices and experiences. It’s hard to think of a better representation of what Canada is today. Featuring work by Derya Akay, George Elliott Clarke, Sameer Farooq, Osheen Harruthoonyan, Nahed Mansour, Nadia Myre, Nep Sidhu and others. Rosemary Heather

In the refurbished gallery, OCADU Indigenous visual culture chair Ryan Rice brought together selections from the federal government’s Indigenous art collection, a 50-year-old program at Indigenous Affairs and Northern Development that hires First Nations curators to acquire artworks that are rarely exhibited. The show highlighted the ongoing cultural strategies Indigenous artists have used in a variety of media to insert their stories into the colonial narrative and keep their creative spirits alive. FS

Montreal’s Aude Moreau used Labour Day weekend to add giant glowing letters to the Mies van der Rohe masterpiece that is the TD Centre, an icon of modernist architecture. A fitting tribute to the architect’s maxim “Less is more,” Moreau’s repetition of the phrase on multiple facades of the buildings created a monumental artwork that succeeded as both image and physical experience. More artworks of this scale, please. RH 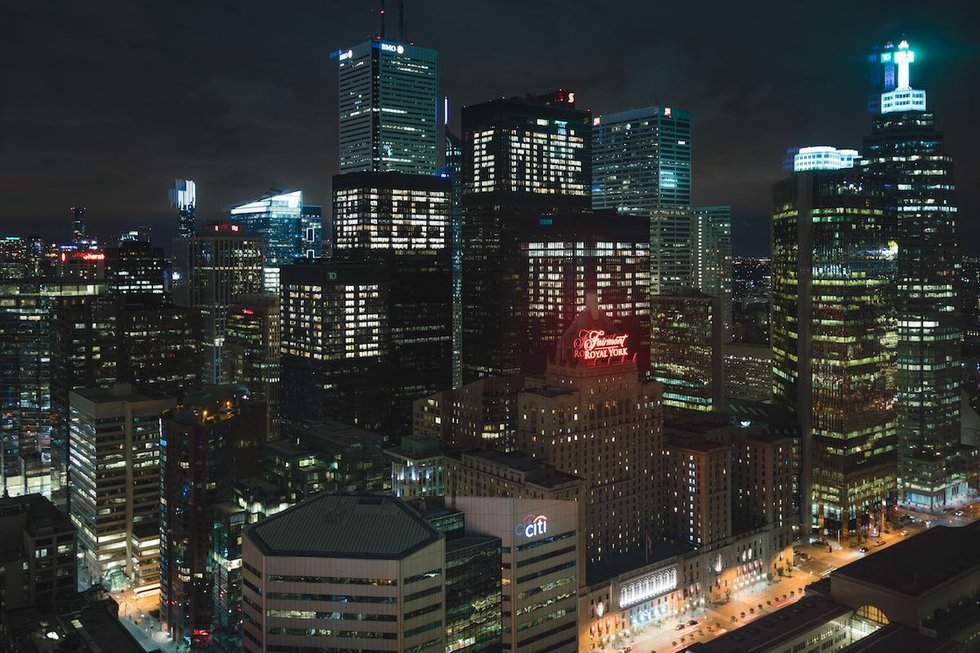 Aude Moreau’s Less Is More Or

6. Life of a Craphead, King Edward VII Equestrian Statue Floating Down The Don, part of the The Don River Valley Park Art Program (October 29, November 5, 12 and 19)

Perhaps no image better sums up the meaning of Canada’s 150 celebrations than that of artist Jon McCurley in a kayak, towing a half-submerged equestrian sculpture down the Don River. Picked up by wire agencies, this image of a work by artist-duo Life of a Craphead (McCurley and Amy Lam), was seen internationally. A smart contribution to a cultural moment that is seeing old narratives dismantled. RH

Bowen, a descendant of early 20th-century Black immigrants to Canada from Alabama, brought her unique perspective on Canadian racism to this installation re-enacting a 1956 CBC drama about a Black lawyer defending a white U of T student who’s attacked a Black athlete. Black actors who played against race and gender deconstructed the teleplay in video and occasional live performances that took place in period sets in the gallery. FS

Wanda Nanibush took time out from the AGO to curate this multimedia show by the Saskatchewan-based Siksika artist, his long-overdue first Toronto solo. Stimson here skewered colonial concepts of Indian-ness with a wall of documents about Grey Owl and tourist kitsch. Videos, photos and a sculptural replica of the looming, horned Shaman Exterminator, Stimson’s second alter ego, provided an otherworldly counterpoint to Buffalo Boy, his gender-bending trickster in skins and fishnets. FS

What Hendeles does is unique, and her exhibition at the Power Plant rightly celebrated that. Moving from gallerist and collector to curator, she now combines these activities into work as an artist. Highly syncretic, Hendeles’s investigations are informed by a personal set of concerns without ever being limited by them. What results are exhibitions like this first major survey of her output, asking us to consider what the lessons of familial history tell us about the present. RH

Curating is harder than it looks. This exhibition is a great example of how to do it well. Borrowing a title from a text by James Baldwin, curator Heather Rigg creates a quietly provocative context for the consideration of how images of Black men function in the visual economies of today. A pointed combination of works, the show avoids sensationalism and delivers on the promise of its title. Featuring work by Alexandra Bell, Mohamed Bourouissa, Leslie Hewitt, Aaron Jones and Keisha Scarville. RH