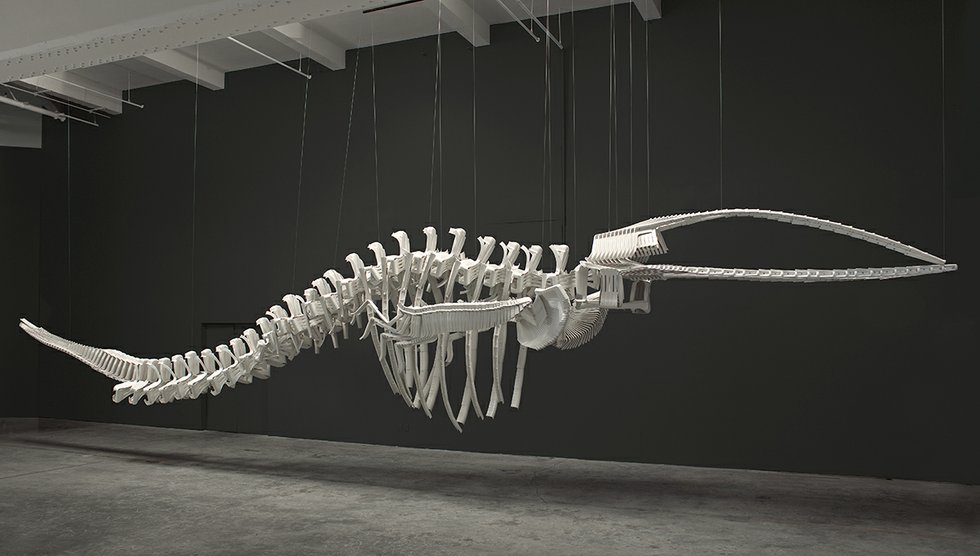 Brian Jungen's Cetology (2002), a 48-foot-long sculpture of a whale skeleton made from plastic chairs, will be on display at the Art Gallery of Ontario from June 20-August 25.

In & Out Of Saskatchewan

What do you know about art from Saskatchewan? This exhibition brings together works from the collections of the Art Museum at the University of Toronto and the Saskatchewan Arts Board, as well as art mailed through the postal system to explore how art from smaller population centres is legitimized by big-city gallery shows. Artists featured in the show include Pat Adams, Tammi Campbell, Theodore Wan, Dagmara Genda and Edward Poitras. Being an artist and art lover in Saskatchewan has grown more difficult in the face of provincial funding cuts to libraries, archives and public transit – making it harder for artists to transport work around and for rural residents to access cultural activities in major cities.

Queen West art institution Paul Petro kicks off Pride Month with two sexually charged shows. Two-spirit Blackfoot artist Adrian Stimson – who was featured in a memorable episode of CBC arts show In The Making – brings his Naked Napi Big Smoke painting series to town. The works depict the Blackfoot character Napi as a way to reclaim sexual histories from western ideas of shame and morality. The second is Virginia’s Room, a re-configuring of late artist Will Munro and Jeremy Laing‘s crafty 2003 installation, performance and video series The Wall Of Virginia Puff-Paint.

If you missed Lisa Jackson‘s virtual reality film at Nathan Phillips Square last year, MOCA is is bringing it back for a two-week run alongside Mark Dion’s The Life Of A Dead Tree exhibition. Created with 3D artist Mathew Borrett, digital design and production agency Jam3 and the NFB’s Digital Studio, the project immerses viewers in Indigenous languages and a vision of Toronto reclaimed by nature.

BC-based artist Brian Jungen is getting a hugely anticipated solo show in the Art Gallery of Ontario’s largest temporary exhibition space this summer. Best known for creating sculptures out of Nike Air Jordan sneakers, the artist’s work references pop culture, his Indigenous heritage and the environment. The exhibition Brian Jungen: Friendship Centre will include new and recent work, “an epic film installation,” his archive – on display for the first time – and well-known works like Cetology, a 48-foot sculpture of a whale skeleton made from plastic patio chairs. 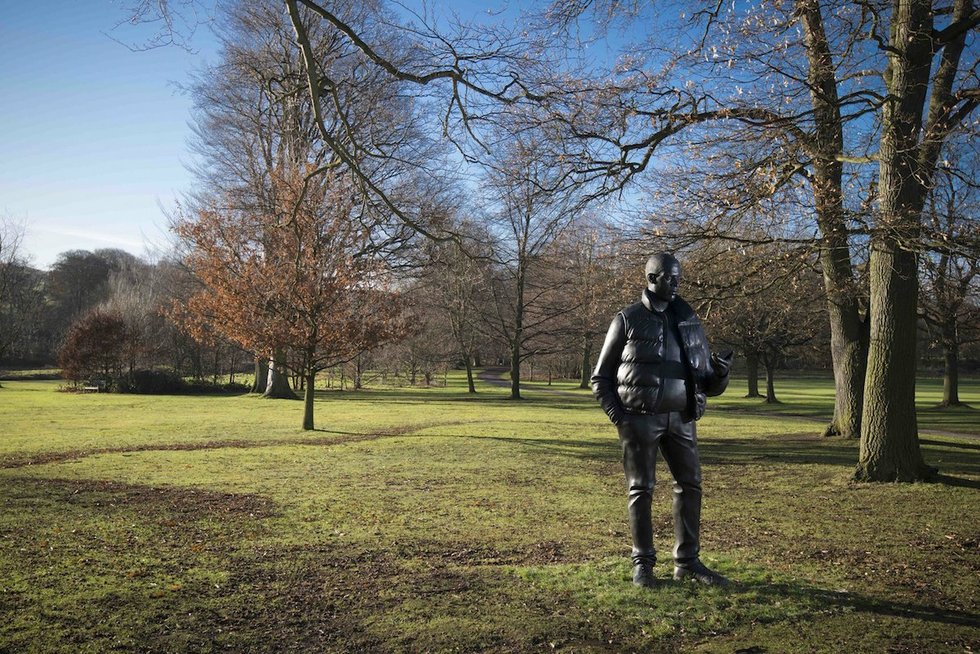 The lakefront contemporary art gallery kicks off its summer season with an outdoor party and opening for the first Canadian solo shows by two rising European artists. Berlin-based Mario Pfeifer will exhibit three video installations (including a collaboration with Brooklyn band Flatbush Zombies), and multidisciplinary London-based Thomas J Price will present a series of sculptures that reference portrayals of Black men in art. Rounding out the program is an exhibition by Beirut- and Paris-based duo Joana Hadjithomas and Khalil Joreige, who present a series of installations and videos about scammers. These exhibitions run to September 2.

Toronto Of The Future

Toronto is constantly expanding, and this third-annual architecture biennial previews 25 private and public developments set to reshape city life in the years ahead. Expect to see commercial, industrial mixed-use and residential developments as well as public infrastructure and transit projects. In addition to 3D architectural models, plans, illustrations and designs, there will be presentations and talks on the future of the cityscape. And since Premier Doug Ford has just announced plans to allow taller towers in midtown and downtown, this exhibition just became even more relevant in the midst of this contentious topic.

For one weekend in July, the foot of City Hall transforms into a maze of booths of more than 360 artists and makers. Rebranded last year, Toronto’s longest-running outdoor art fair also features a lounge, a beer garden, performances and panel talks. The work on display is by a mix of student, emerging and established artists so there’s a variety of price points.

Did you know Metallica guitarist Kirk Hammett is a huge collector of vintage horror movie posters, artwork, costumes and props? So much so that he has organized a touring exhibition, and the second stop is the Royal Ontario Museum. It’s Alive! Classic Horror And Sci-Fi Art From The Kirk Hammett Collection will feature posters from the 1920s to the 1980s, including the only surviving copy of the original 1931 Frankenstein poster, plus a new original instrumental song and a selection of the shredder’s one-of-a-kind guitars.

The missing and murdered Indigenous women and girls crisis is back in the headlines in a big way thanks to a federal report, which found evidence of “deliberate race, identity and gender-based genocide.” As Canada grapples with this hard truth, the Gardiner Museum lobby will host the Canadian premiere of New Mexico-based multidisciplinary artist Cannupa Hanska Luger’s Every One, a social sculpture comprising 4,000 individual ceramic beads made by people directly impacted by the crisis. The beads form a pixelated image of Kali Spitzer‘s photograph Sister, which will also be on display.

The Way She Looks: A History Of Female Gazes In African Portraiture