NOW MagazineCultureArt & DesignMickalene Thomas celebrates Black women at the AGO

Mickalene Thomas celebrates Black women at the AGO 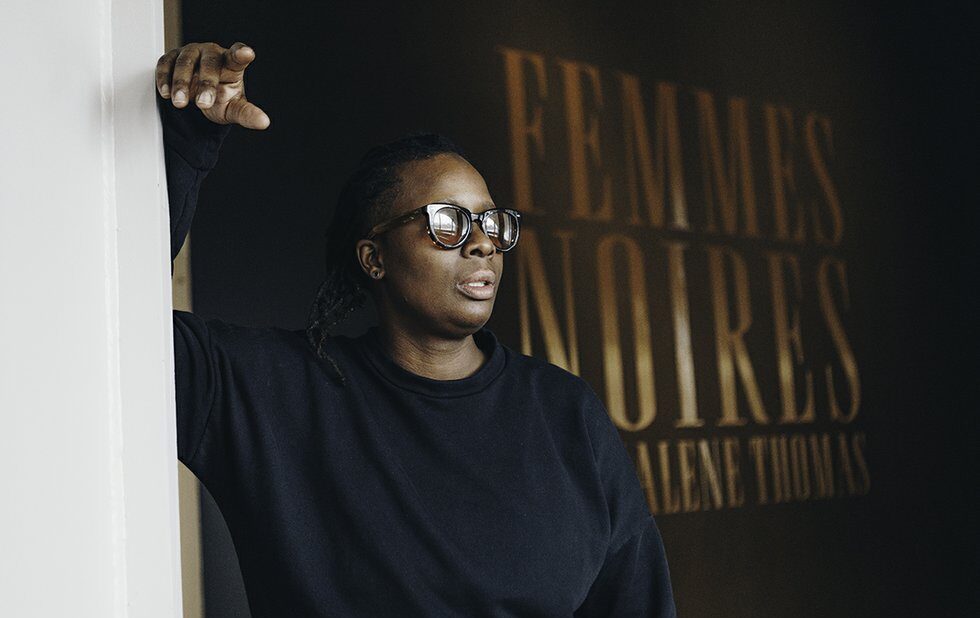 FEMMES NOIRES by MICKALENE THOMAS at the Art Gallery of Ontario. To March 24. ago.ca.

Eartha Kitt’s sorrowful alto has a fervour that hits you as soon as you enter Mickalene Thomas’s Art Gallery of Ontario show Femmes Noires. Before you see any of the artwork, Kitt’s Angelitos Negros can be heard throughout the gallery, asking: “Where are the Black angels?”

Thomas answers that question by creating her own.

Working with curator Julie Crooks, the Brooklyn-based artist has created an ode to Black womanhood for her first large-scale solo show in Canada (after exhibiting on billboards across the country as part of the 2016 Contact Photography Festival). The exhibition also marks the second time a Black woman has received a solo show at the AGO.

Thomas’s work spans a multitude of mediums and hangs in major New York institutions like the Museum of Modern Art and the Guggenheim. Femmes Noires collects works created from 2010 to 2018 that show the breadth of her practice: collage, tableaux, portraits on Plexiglas, enormous paintings done in acrylic, oil and rhinestones and copious amounts of scintillating, shocking colour. Everything begs to be experienced with as many senses as possible.

“Visibility, empowerment, celebration” is a refrain that Thomas repeats often when speaking about the show during a press preview. Returning to the omission of Black angels religious history and popular culture, the show places the Black woman at the centre of this institutional space to make her visible after years of being omitted from the Western art canon.

Thomas’s Black women are optimistic, sensual, vulnerable but most importantly they appear completely in control of their agency and subjectivity. They’re not relegated to the margins of the canvas, but boldly and brightly command the centre.

Her love of the French Impressionists also informs much of her work – she is devoted to reimagining the traditional in her own image. 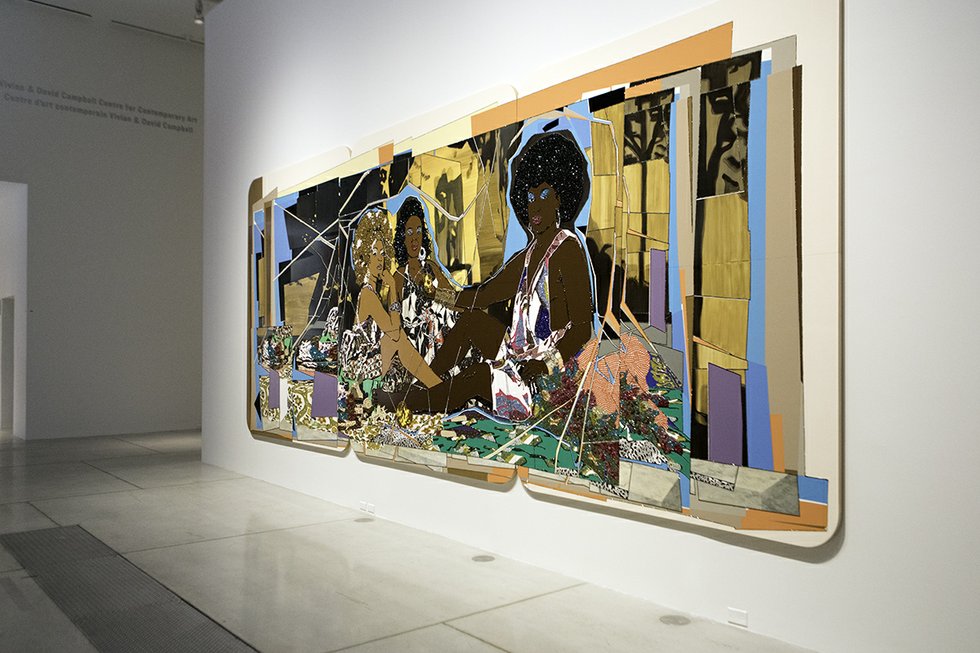 Take Le déjeuner sur l’herbe: Les trois femmes noires, which is a reinvention of Édouard Manet’s 1863 painting and the centrepiece of the AGO show. The 10-by-24-foot work replaces the white men and women having lunch with three Black women adorned in luxurious dresses, full Afros and rhinestones that mimic pointillism.

She pulls from Henri Matisse, Gustave Courbet, Pablo Picasso and others to subvert and reconfigure idealized beauty. By appropriating acclaimed pieces, she inserts herself and other Black women into the context of “great” Western art.

“I love the fact that when you Google Matisse or Manet, I’m right there with them,” she says during a public artist talk the evening after the media tour.

There’s a sense of sisterhood that flows between the works, notably in a room of work inspired by The Color Purple. The film and novel were integral to Thomas’s exploration of self in her younger years and the support and love exhibited by the female characters represent the bond Thomas wants all diasporic Black women to share. “I want them to see that there’s a sisterhood in America for them and that there’s this camaraderie. We’re in support of each other.”

In the video collage Do I Look Like A Lady? (Comedians And Singers) icons like Josephine Baker, Nina Simone, Whoopi Goldberg, Whitney Houston and Wanda Sykes are juxtaposed in a narrative about the hardships that groundbreaking Black women face. Shared experiences of battling racism and oppression represent another form of sisterhood.

The theme of community that runs through the show manifests physically in the exhibition space itself: three living rooms modelled after Thomas’s childhood living room in New Jersey.

Attendees at big museum shows are rarely encouraged to engage with art so intimately, but Thomas is insistent people sit and relax and watch the many video installations in their entirety.

Thomas hopes the show attracts folks other than “the usual museum-goer” – specifically audiences that haven’t seen the museum as a space for themselves before.

“I want them to feel like it’s their living room,” she says. “I made these spaces for them.” Sitting on the patchwork, pattern-blocked armchairs and looking through books by Toni Morrison, Angela Davis, Maya Angelou and recent Giller Prize winner Esi Edugyan is not only an extension of the viewing experience, but a ploy to get people to sit with the pieces longer.

Femmes Noires is the kind of show that forces you to stop and wonder why you’ve never seen anything like it before. 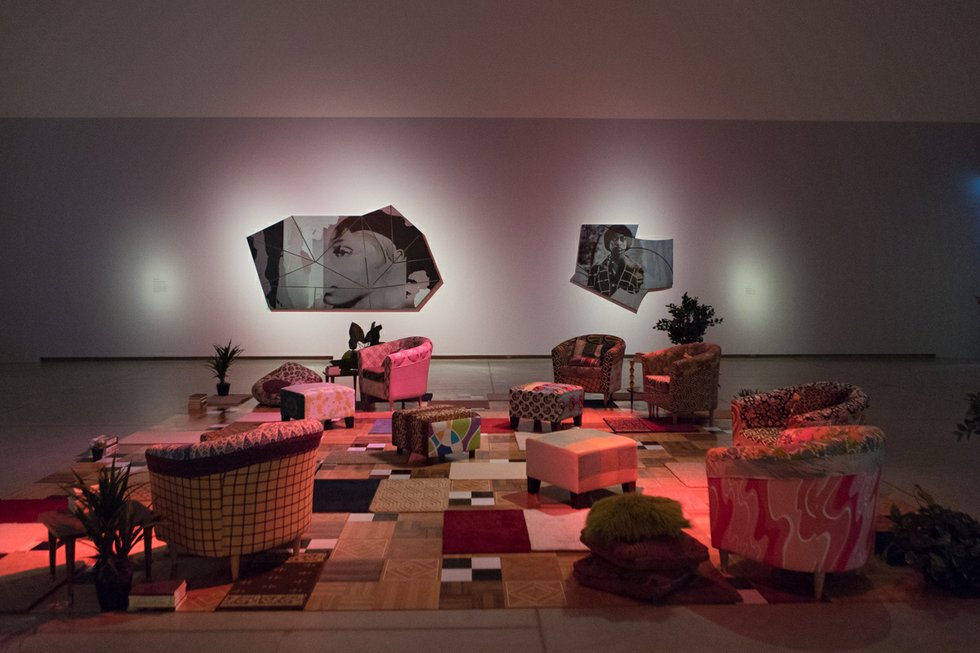 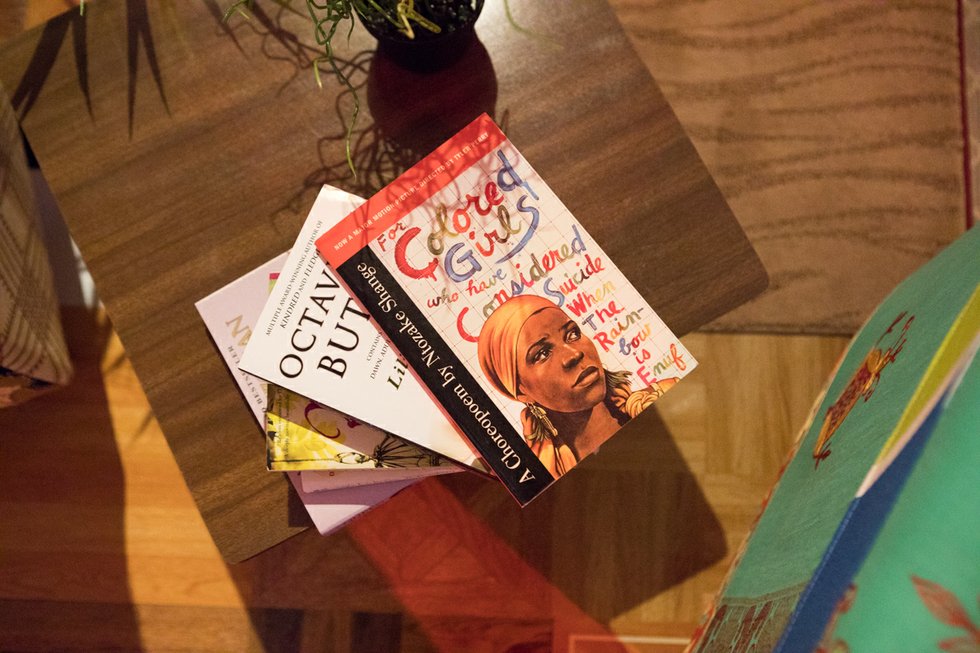 A pile of books in one of Mickalene Thomas’s interactive living room installations.