NOW MagazineCultureArt & DesignNuit Blanche 2019: a zen garden and a reflection on the Raptors at 25

Nuit Blanche 2019: a zen garden and a reflection on the Raptors at 25 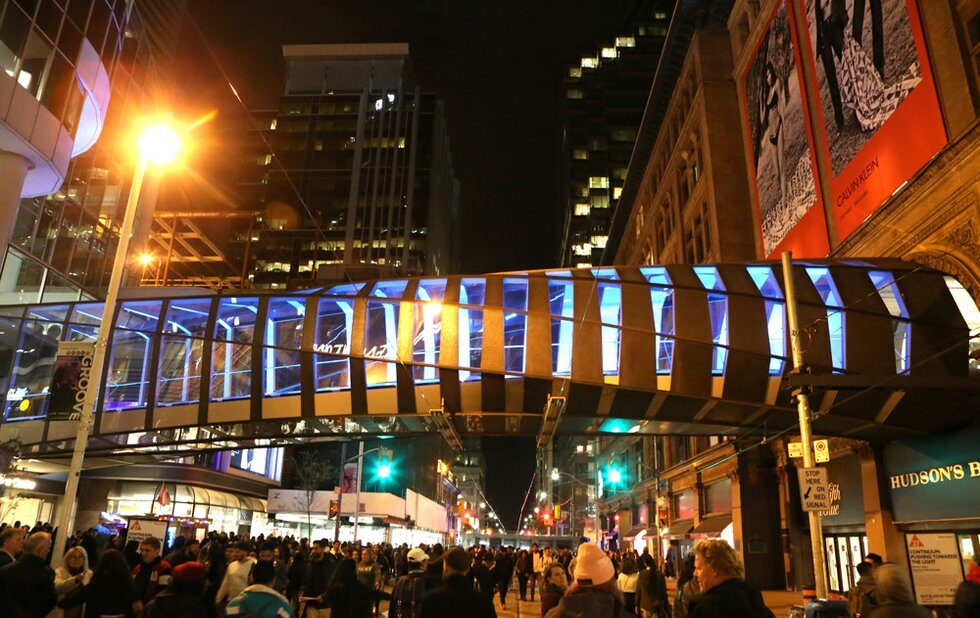 Director X's Death Of The Sun was a focal point of Nuit Blanche in 2016.

A zen garden soundtracked by Charlotte Day Wilson, the sequel to Director X’s Death Of The Sun installation, a feminist game show hosted by Hatecopy and two Toronto Raptors-inspired works are among the art projects happening at Nuit Blanche this fall.

The 14th annual all-night art event, which takes place on October 5, will once again include a hub around the Scarborough Civic Centre and expands to Fort York and Garrison Common for the first time.

On August 14, the city announced the nearly 90 projects by more than 300 artists – down from 450 last year – that will activate nine neighbourhoods around the curatorial theme of Continuum.

The city is producing two major exhibition zones plus a large-scale installation by American artist Daniel Arsham in Nathan Phillips Square. Work will also be displayed at museums, galleries and hotels, Yonge-Dundas Square, the Ontario Science Centre, the Eaton Centre bridge and at the inaugural Toronto Biennial of Art, among other locations.

The centrepiece exhibition is New York-based Arsham’s Lunar Garden, an immersive installation inspired by a dry Japanese Zen garden that combines reimagined architecture, raked sand, sculpture, light and an original soundscape by Toronto singer/songwriter Charlotte Day Wilson to create “a world of fictional archaeology.” The garden, which Arsham has previously exhibited in New York City and Atlanta, will feature a 32-foot light orb resembling the moon as well as enlarged casts of everyday objects. Its pink hue marks a tonal shift – the artist is colourblind and only began working with colour after he started wearing corrective glasses a few years ago.

Lunar Garden will be on view through October 14.

Here are some highlights from Nuit Blanche’s programming announcement.

Layne Hinton and Rui Pimenta curate the work in and around Fort York and Liberty Village based on the theme of creation and destruction. The site of downtown’s last slaughterhouse, 2 Tecumseth, will host a series of latex-cast sculptures based on objects found in the shuttered abattoir as part of Kim Morgan and Kaitlyn Bourden‘s Anatomy Of An Abattoir. In the same building, Toronto artists Max Dean and Jared Raab will screen That Moment, a video installation that captures when “a playful or loving touch becomes something more violent.”

Down at Fort York National Historical Site, artists Aylan Couchie, Jason Baerg, Logan MacDonald, Vanessa Dion Fletcher and curator Ryan Rice will stage Placeholders – Listen To The Land, a multimedia installation that asserts the Indigenous presence at the site. Nearby, Studio F Minus will shoot a toy baby from a customized cannon every 15 minutes at Garrison Common as part of Everyone Wants A Free Baby!

Buffalo artist Gareth Lichty will wrap the Bentway in hazard tape as part of the sculptural installation Hoarding Edmonton-based Christina Battle’s video installation Notes To Self will be set up in the Fort York Visitor Centre and Toronto’s Francesca Chudnoff will stage the video/dance performance Halcyon at 21 Strachan.

At the City Transportation Yard at Wellington and Walnut, Ellenville, New York artist Jonathan Schipper‘s Detritus will use a 3D printer to create objects out of salt that will sit atop piles of road salt inside a storage dome. And at 38 Dan Leckie Way, Nathan Whitford‘s responsive light installation Nucleus will change based on the energy and presence of bystanders.

Elsewhere downtown, Esmaa Mohamoud – who memorably displayed sculptural dresses made from NBA jerseys at the AGO two years ago – and Bryan Espiritu will stage Peace To The Past, Reach For The Future, which reflects on the 25th anniversary of the Toronto Raptors. At Queen West and Bay, Espiritu will deliver an emotional performance that delves into the vulnerability behind athletes’ “muscled shells.” Mohamoud is creating a sculpture inspired by the Raptors’ anniversary symbol.

Once again, the bridge linking the Eaton Centre to the Hudson’s Bay store will host a light installation: Bekah Brown‘s Chasing Red will depict the northern lights. At Yonge-Dundas Square, multidisciplinary collective Ghost Atelier will create On Thin Ice, a “pilgrimage-like destination” where Torontonians can collectively grieve melting glaciers.

Ashley McKenzie-Barnes, who has curated projects for Manifesto, corporate brands and cultural institutions, oversees Scarborough’s second foray into Nuit Blanche. Under the theme Queens And Kings Of Scarborough, the works will explore “systems of social marginalization, self-identity negotiation and racial stereotyping in a modern framework.”

Directly plugging into the royalty theme, Durothethird – the artist behind the angel wings mural outside Queen West’s Brooklynn Bar – will create what sounds like another Instagram-friendly opp: Scarborough Royalty is a graffiti-based “participatory sculpture” that will allow visitors to feel like a king or queen.

In the Scarborough Civic Centre rotunda, Jamaica-born mixed-media artist Ebony G. Patterson, who had a solo show at Miami’s Pérez Art Museum last year, will stage what Nuit Blanche is billing as the artist’s “most ambitious video installation to date.” The monumental …three kings weep… will draw on Renaissance portraiture as well as poetry by Claude McKay to explore the ways the Black male body is seen. Inside the Civic Centre’s council chamber, Cree painter Kent Monkman‘s video installation The Miss Chief Eagle Testickle Picture Show will display across five screens.

Other projects include Camille Jodoin-Eng‘s Water Shrine installation at the pond at Albert Campbell Square Mark “Kurupt” Stoddart‘s ReConnected STC, comprised of life-size photos in the path between the TTC station and Scarborough Town Centre Montreal artist Marites Carino‘s Handshack, an interactive installation where strangers perform hand duets and Alex Narvaez and Sid Naidu‘s Scarborough Made will document the stories of everyday people through film and photography. 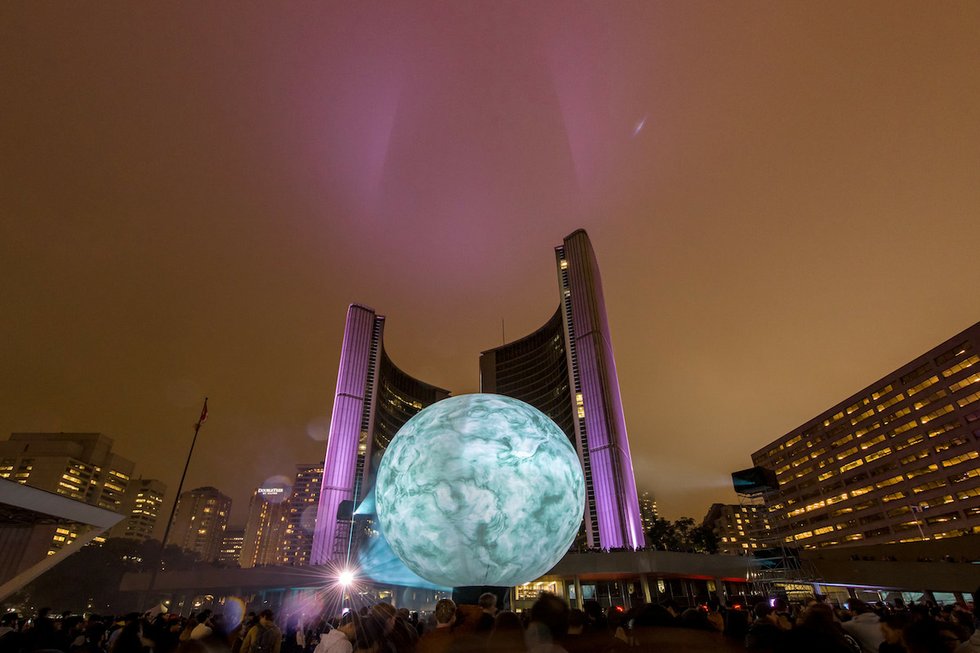 Director X’s Life Of The Earth

Toronto filmmaker Director X is bringing the sequel to one of Nuit Blanche’s most iconic creations to the Ontario Science Centre. In 2016, the director behind Drake’s Hotline Bling and Rihanna’s Work videos set up the installation Death Of The Sun in Nathan Phillips Square. The massive sun replica depicted the death of our life-sustaining star and was seen internationally when Drake featured it on his 2017 European tour.

The follow-up, Life Of The Earth, will reflect on mass extinction and environmental destruction by showing the evolution of the earth, from Pangea to the Anthropocene and beyond. It will be on display at the Science Centre from September 7 to January 5.

For full details on this year’s event, visit toronto.ca/nuitblanche.