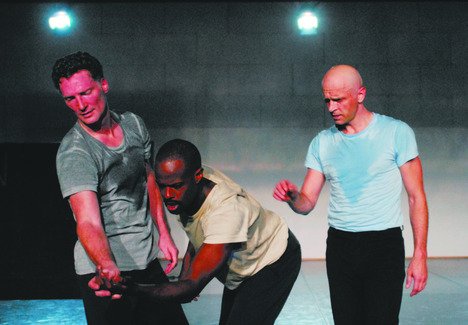 Like pro athletes, dancers hit a professional brick wall in their 40s – that is if they’ve made it that far without career-ending injuries.

But the men in Full Bloom are ready to crash through that wall – or at least use their brawn and collective wisdom to find a door into the next room. The 70-minute show is created and performed by dancers in their 40s who have all had brilliant careers and are now taking steps in other directions.

Kevin O’Day, for instance, was a regular dancer with Twyla Tharp’s company and a member of American Ballet Theatre and Mikhail Baryshnikov’s White Oak Dance Project for years. Retired from the stage for 12 years, he’s kick-started an impressive second career as a choreographer.

And then dancer/choreographer Robert Glumbek asked if he wanted to dance again.

“That was a few years ago,” says O’Day on the phone from Germany, where he’s artistic director of ballet at Nationaltheater Mannheim.

“We danced a single performance of a James Kudelka duet. It turned out so well that Robert asked to do a bigger project together.”

Full Bloom consists of dances by Glumbek, O’Day and Luches Huddleston, who couldn’t be more different from each other. Glumbek’s from Poland but based now in Canada O’Day and Huddleston are American-born but living in Germany Glumbek and O’Day are straight and white, while Huddleston’s black and gay.

“We bring different perspectives on manhood to the table,” says O’Day. “We’re three different types of men, but we’re all dealing with dance and, in a way, mortality. Being in your 40s as a dancer forces you to look at mortality.”

“The energy of the three of us will transfer over to the viewers,” he says, pointing out the positive response to the piece last fall in Mannheim. “The audience feels it. It’s like living: you take one breath in, and if you really are there in that moment, you feel really fulfilled with that breath. That’s how we approach this work.”

Getting back into performing shape after more than a decade away was tough, he says.

“I needed to get into condition,” he says. “I’ve been jogging four to five times a week, doing yoga, push-ups and sit-ups. I’ve had to change my diet, not for weight but to facilitate the recovery of muscles and joints. Cutting out sugar and simple carbohydrates makes a big difference.”

But all that only goes so far. Glumbek injured himself in November, so dancer Roberto Campanella has stepped into his shoes.

“Taking care of yourself and resting only goes so far,” says O’Day. “A big part of it is luck. Accidents happen.”

Still, he’s encouraged by the long careers of living legends like Tharp and Baryshnikov.

“They began as mentors and they continue to inspire me,” he says. “I saw Baryshnikov last year for the first time in about eight years, and he showed me the new space he’s renovating. His new project includes him dancing. He’s getting onstage and enjoying it. When I was dancing with Twyla, she came out of retirement at 50 to dance with me. She’s in and out of the studio each day.”

And what does it feel like to be back onstage?

“Natural,” he says. “Luches knows me as this intense choreographer, but when he started dancing with me he said I was incredibly relaxed.” [rssbreak]

O’Day on what gets more difficult with age:

On what gets easier:

On his recent full-length ballet Hamlet for Stuttgart Ballet: